My thoughts on the 2015 Grammys 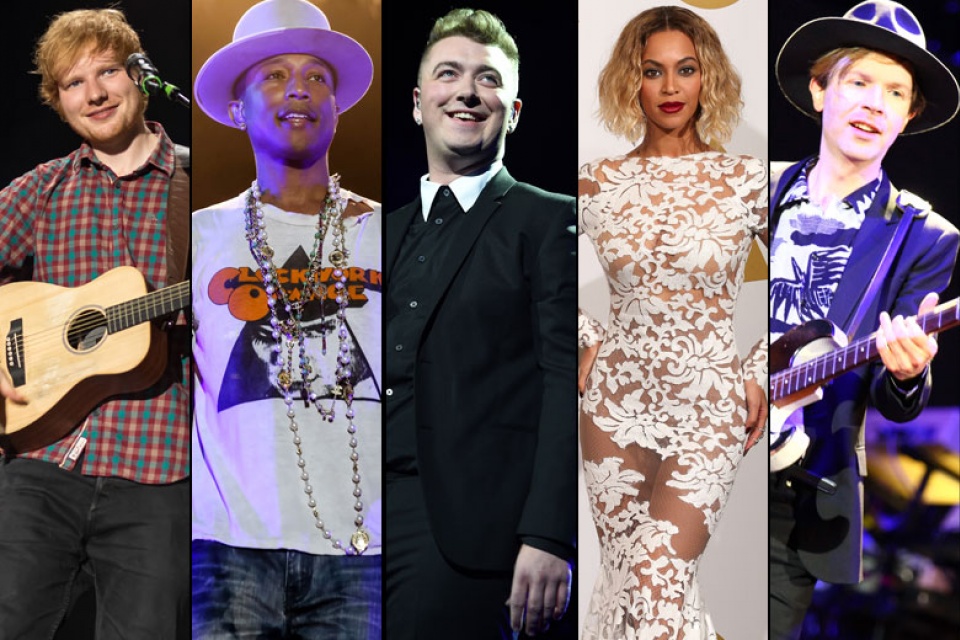 I am a music fan and The Grammys are my jam. Watching it always a good litmus test to see if I have my finger on the pulse of what’s going on in the lyrical world. I like to high five myself when I know the artists (read: Sam Smith). On the other hand, I do a lot of Googling. For instance, did you know that Beck has recorded something since “Loser?” Me neither.

Here’s a list of my favorite highlights from the night. Enjoy!

2. ACDC wants you to know that they are both back in black and on a highway to hell.

3. Pharrell dances and dresses to the beat of his own drummer, and it’s time we all accept that.

4. Madonna is 56-years-old. I think it’s important to point that out.

5. The country artists sound VERY country at The Grammy’s. 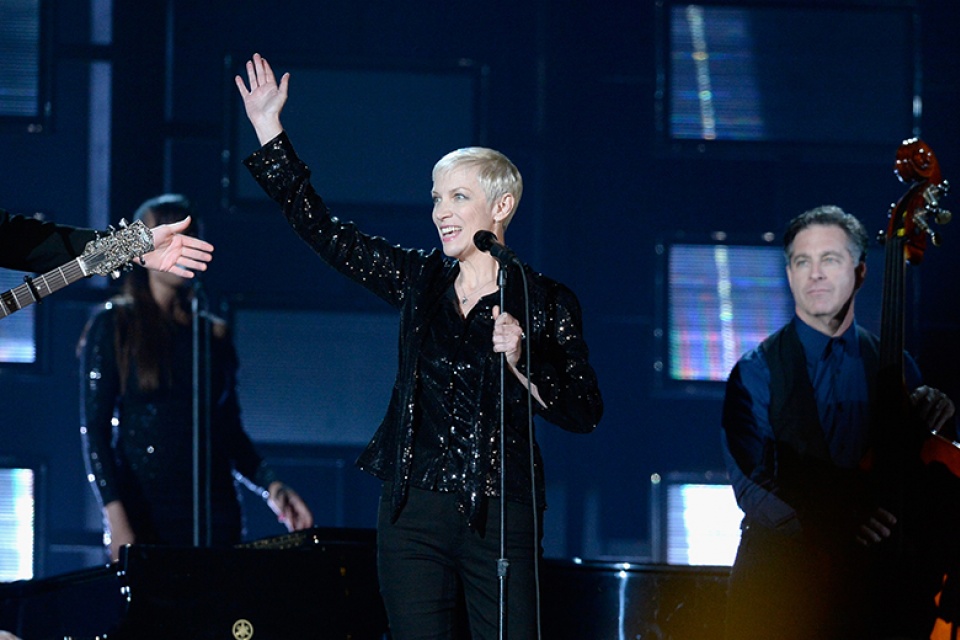 8. Ed Sheeran is very talented, and even though I sort of fell asleep during his set, I like him so much. I’m confident he was one of the Weasleys.

9. Someone give Joe Jonas a pair of adult shoes. He’s officially reached the “dress like a grown-up” bracket and should own it.

10. Adam Levine is pretty. His handsomeness was almost distracting enough to peel my eyes away from the very high split in Gwen Stefani’s gown. Almost. 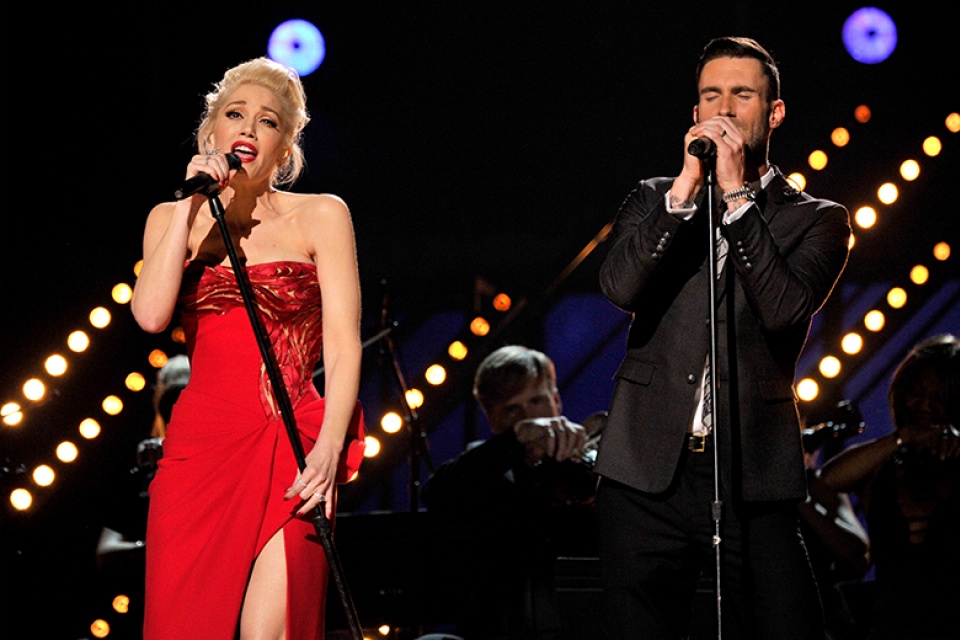 11. I want to bottle Taylor Swift’s attitude and distribute to young girls everywhere.

12. I don’t really get Kanye. Or why he was singing over a steam grate.

13. Sam Smith is darling, but I’d like for the radio and Pandora to branch out from “Stay With Me” if at all possible.

14. Katy Perry performed a somber number. The sharks did not make an appearance on stage, but I hear the left one will be at the after-party.

16. Imagine Dragons are on the JV team, or a glorified Target commercial if you will.

17. Tony Bennett and Lady GaGa are best friends. I’m going to let you marinate in that sentence for a moment. They sang “Dancing Cheek to Cheek” and she kept trying to put her cheek to his, but he wouldn’t have it. She also held the train of her feathery dress the entire time which was the opposite of normal. 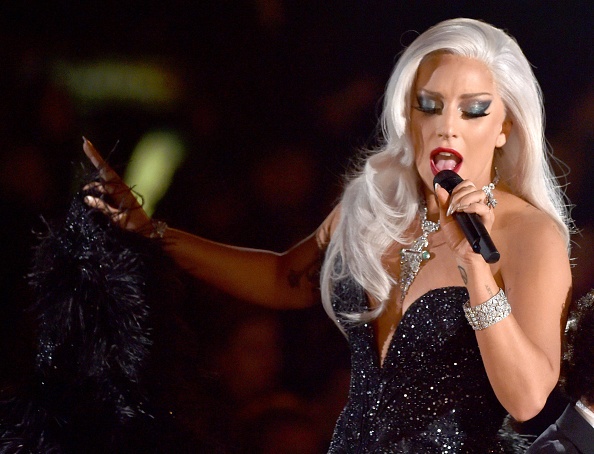 18. At first, Usher singing a tribute to Stevie Wonder with a harpist, made me very happy. Three minutes later, I was ready to fast forward. But I was watching live. Then Mr. Wonder was on the stage playing a harmonica and I got excited that he would sing! That did not happen. Usher escorted him off the stage and everyone watching felt cheated and pulled up their “I Just Called To Say I Love You” playlist on their phone. Or was that just me?

19. I still don’t get Kanye, but I totally dig Rihanna. I assumed she was going to rip off her baggy suit to reveal some sort of barely there outfit, but the camera cut to Paul McCartney’s wife and Kim Kardashian singing every word of their husband’s song. Too bad no one reviewed the lyrics with Sir Paul before show time.

22. I had high expectations for Juanes, based on Ricky Martin’s performance at the Grammys. Ricky brought the house down at a time that the house needed to be brought down. Juanes did not deliver the way Ricky did back in 1998. Here’s proof:

23. Prince just enters a room and people go NUTS. Including me. I have the same necklace he was wearing, and therefore I am a cooler person because of this fashion choice.

24. If you were to vote on “Album of the Year” among Beck, Beyonce, Ed Sheeran, Pharrell and Sam Smith, would you question the ballot’s validity since Beck was somehow listed as a nominee? PS: Beck won.

25. Correction: I get Kanye. Sort of. I do not get Sia and I’m definitely of scared of her. And I can confirm that that the taller one was Kristen Wiig.

26. “Take Me Home Precious Lord” is one of my favorite hymns and Beyonce was able to perform it beautifully. Even when she was wrapped in a mosquito net.

27. And this is when my DVR cut off because he didn’t know that The Grammys would be the longer than the Super Bowl. Yes, my DVR is masculine. Is that weird?

i had to mute beyonce’s performance of Precious Lord. because she just won for Drunken Love. i just can’t even remotely hear a lovely hymn coming out of the same mouth and body that does the DL video. i just can’t.

8. Ed Sheeran is very talented, and even though I sort of fell asleep during his set, I like him so much. I’m confident he was one of the Weasleys.

Ah, Ricky’s starmaking turn. I remember it like it was yesterday. Those hips. Ay yi yi.

Kanye West is a twatwaffle.

This is my new favorite word as well. And I will use it today. Perfectly describes Kanye. Love it!

Second on the Kanye waffle comment above. What an egotistical, self-centered p.o.s. If Beck were a big burly guy, there’s no way Kanye would have gone up there. He’s a bully.
And I totally get Sia. At first I wasn’t sure if Kristen Wiig’s performance was supposed to be funny, but it quickly became clear that it wasn’t supposed to be funny. I was entranced. But I’m also someone who watches the “Chandelier” video over and over again. So, yeah.

The “Orange – because it’s the new black” commenter has returned.

While I wish I could comment more on The Bachelor (bible study on Monday nights), I feel excited because I can comment on this!

– First, Sia should have won song of the year and/or record of the year. Why? “Chandelier” was musically intense and vocally strong, had great composition, and had a message that we need to hear.
Also, it wasn’t co-opted from an incredibly well-known song by an incredibly well-known band, though I must confess that it took a “trending” news post on FB for me to realize the almost identical melodies between “Stay With Me” and “Won’t Back Down.” Different keys a new song won’t make. Glad, at least, that Mr. Smith and Mr. Petty & co. were amicable about everything, but the misshap should have been reflected in Grammy voting.

– On a lighter note, I think Gwen and Adam were great together, chemistry-wise, but I too would have loved to see that slit sewn up and a completely elegant Mrs. Stefani-Rossdale revealed. That said, I still think she looked awesome.

– Yay for a modest Rhianna! She looked beautiful in her pink dress and toned-down-but-sleek hair!!!

– Let’s tell the Grammys that next year they can meet us in the middle with a fun show that is neither satanic nor funeral-esque. Actually, that may be the two sides of the same coin, but anyway, make it happy and poignant, not creepy nor sad.

Spot on with your commentary! Also, Tom Jones had a total aging, Welsh Oompa Loompa vibe going on!

The only thing I disagree on is Beck. I totally get that he’s not a household name, but these are not the People’s Choice awards. Any of these artists were worthy of winning this category. I hate that Kanye made it a Beck vs. Beyonce issue. Beck has consistently put out brilliant diverse albums that are a lot more accessible than people think.Morning Phase is certainly amongst his best. He is universally respected in the music industry personally and professionally (wait, I guess not by Kanye!!). What a shame a dipshit like Kanye had to rain on his parade! One good thing is so many more people will check out his music now.

Okay, got that off my chest. I needed something to do while waiting for the Bachelor recap!

I have been a fan of Beck since the 90’s and have always enjoyed his music. I had the very fortunate chance of seeing him twice last year (Pitchfork and Coachella) and he did not disappoint.

He is clearly a classy man as well.

Didn’t watch the Grammys. I just had to find a place to say that I’m totally jonesing for the Bachelor recap!!! I’ve been hitting the refresh button all day!!

As was mentioned, the only good thing coming out of the Beck/Beyonce debate was the fact that now more people will be exposed to Beck’s music. I consider myself a fan, but until Sunday night, I was not aware he had come out with a new CD. Beck is a genre master who creates his music without an eye to what effect it will have on the music industry itself. And his response to Kanye’s childish tirade was classy. Check out this musical genius.

Kanye once again proves he is an arrogant jerk. He may be very talented but he is still an arrogant jerk. Since this is the second time he has ruined another artist’s special moment, I wonder why Beyoncé and JayZ don’t get him to stop. They have far more credible influence with him than anyone else. Many people resent his behavior and I hope he is not invited back. There are plenty of super talented artists in the world. His behavior is not fair to the other artists. Kanye does not play well with others !!! Later in the show, I was touched to see that after Beck and Chris Martin of Coldplay sang one of Beck’s songs together, Chris Martin gave Beck a pat on the back and then stepped back into the shadows to let Beck receive the recognition and applause from the audience. After a couple of seconds, Beck realized where Chris was and tried to get him to move to the front with him. Both of these artists demonstrated what class acts they are. Kanye could learn something.

Bravo, this remarkable phrase is necessary just by the way Orthomol Vital m