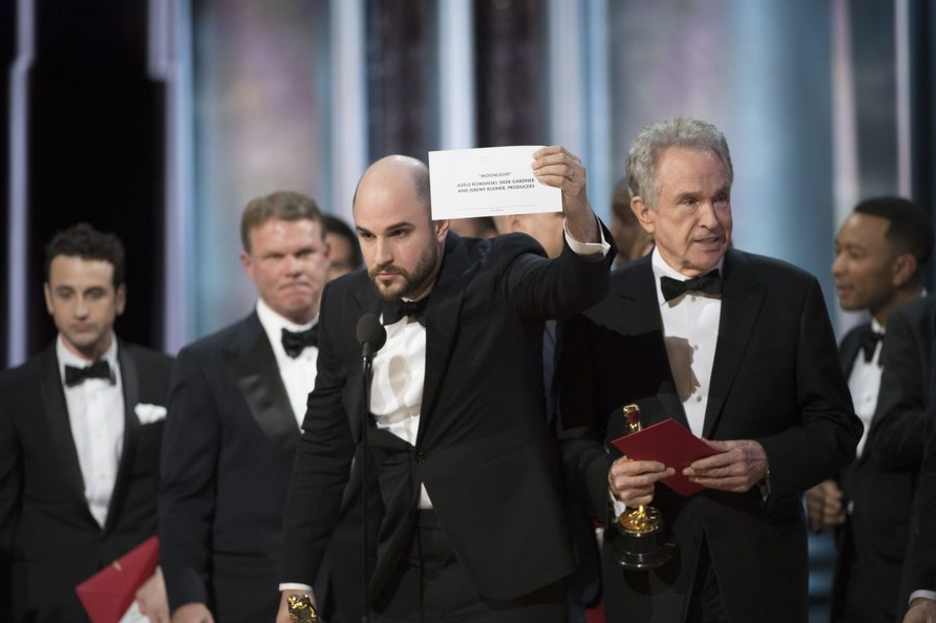 My thoughts on the 2017 Oscars

I’m guessing someone at PriceWaterHouseCoopers got a red slip in their inbox today. You’d think that the Best Picture envelope would have been double…nay…triple checked before leaving backstage, but no. The most shocking news from the 2017 Oscars was not Ryan Gosling’s sister’s boobalicious dress or Casey Affleck’s disheveled appearance. It was the announcement of LaLa Land winning Best Picture, following a few minutes later by the biggest “PSYCHE” in television history since we all thought JR was dead. Several thoughts went through my mind last night as I watched the random dude in the Madonna mic traipse around the stage, grabbing envelopes from the LaLa Land peeps. Clearly, something was up.

I have to apologize to Warren Beatty first. I thought his hesitation in reading the card was due to his 80-year-old eyesight. It never occurred to me (why would it?) that he was puzzling through the information on the card he was holding. According to Beatty, the card was from an award they had already given to Emma Stone earlier in the night for LaLa Land. Faye Dunnaway saw the names of the movie and announced it.

Should they have called an audible and asked the patiently waiting audience to hold on a minute so they could get the correct card? Yes.

It’s very easy for me to say that while a billion eyes aren’t looking at me.

What I did like was how gracious LaLa Land’s producer Jordan Horowitz handled himself in the moment. While he’s giving the speech of a lifetime, he senses that something is off and figures out pretty quickly that Moonlight is the winner. He takes command of the moment, holds the correct envelope with Moonlight’s name above BEST PICTURE, announces that a mistake has been made, and invites that cast onto the stage to receive their award, calmly claiming that this is not a joke. He praises them for a job well done and then hustles all his fellow LaLa Land cast mates out of the spotlight.

This guy is the real deal. I thought both parties handled themselves beautifully. Again, someone is getting fired, but this water cooler moment is going down in history for sure.

Here are some other thoughts from the night. Enjoy!

Can’t Stop the Feeling — Of My Love For Justin Timberlake
The smartest thing show runners did was open the night with a performance by Justin Timberlake. His earworm, “Can’t Stop the Feeling,” was up for Best Song. He entered from the back of Dolby Auditorium, encouraged the audience to “get up,” and proceeded to delight each and every person. My favorite parts? His fist bump with fellow Mouseketeer Ryan Gosling, Keith Urban and Cookie from Empire (Taraji P. Henson) singing along to every lyric, and JT dancing with his wife Jessica Biel at the end.

Bad Blood
A joke that ran its course by the end of the show was host Jimmy Kimmel’s complete distain for frenemy Matt Damon. Jimmy berated Matt for passing on the lead role in Manchester by the Sea (nominated for several awards) in lieu of making a Chinese ponytail movie. Indeed. We all thought that was curious.

Funny Jimmy Quote Of The Night — Part 1
“Remember when we all thought last year’s Oscars were racists? This year we have black people saving NASA and white people saving jazz.”

Mahershala, Mahershala, Mahershala
Mahershala Ali won for Best Supporting Actor in Moonlight. He was charming, smooth, and thanked all his teachers. I never saw Moonlight but I was drawn to Mahershala in a familiar way. A quick IMDB search concluded that I know him. He’s Boggs from Mockingjay. He’s the one who stood by Katniss (fellow Academy Award Winner Jennifer Lawrence) while taking on the Capitol. And his name is really fun to say. 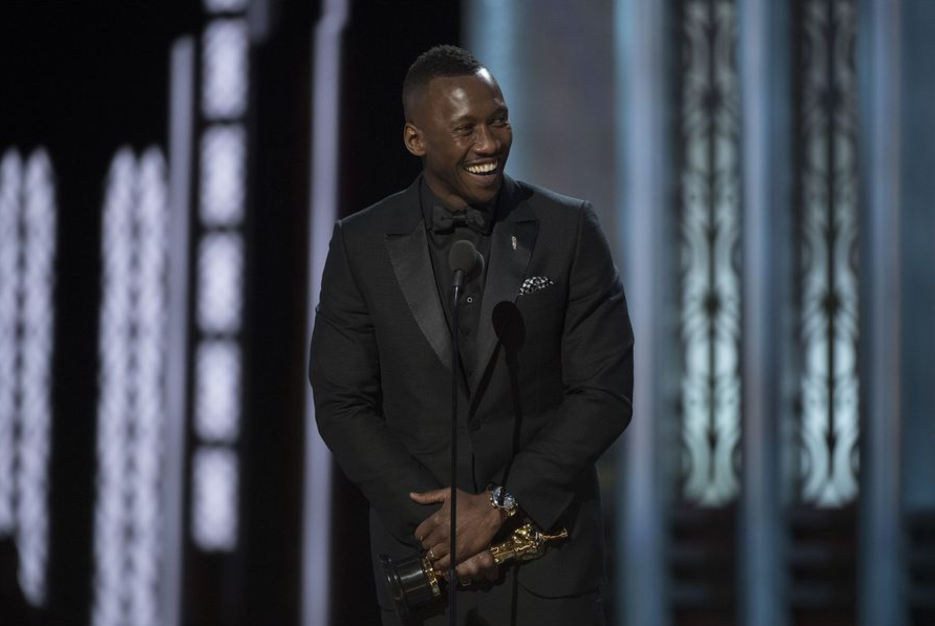 Best Dressed Presenters
In a night that sported all sorts of metallic-based dresses, the color chartreuse, and too many bows to count, I thought these three ladies were impeccable. Take in Janelle Monae, Taraji P. Henson, and Octavia Spencer. PS: LOVE THE FEATHERS! 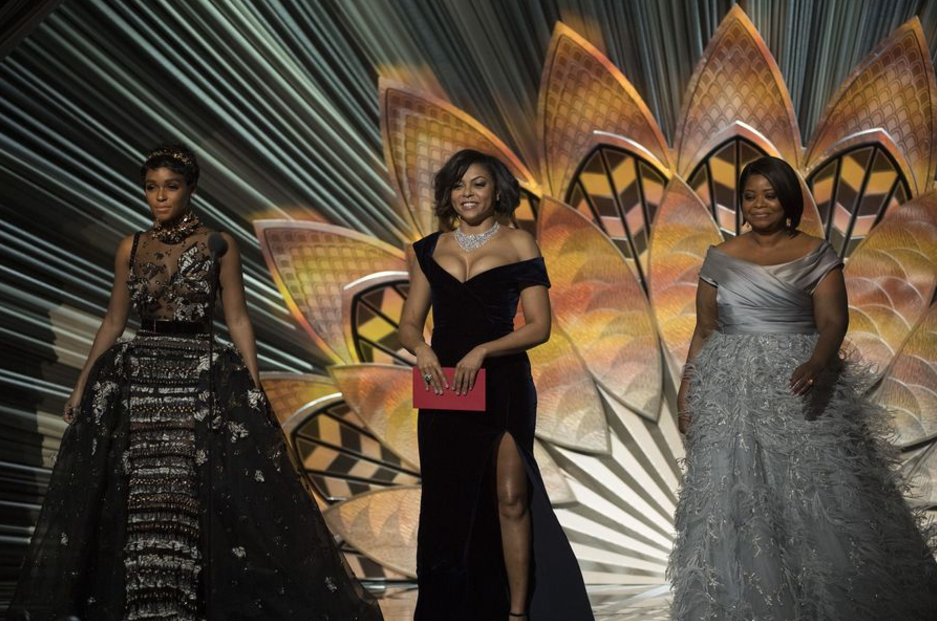 Funny Jimmy Quote Of The Night — Part 2
“Next to present is a former wrestler who is the highest paid actor in the world. Kind of puts this all in perspective, doesn’t it? Put your hands together for Dwayne “The Rock” Johnson.”

She Is 16, Going On 17
Auli’i Cravalho is the title character in the Disney film Moana. She sang a song on national television, in front of a roomful of celebrities, and handled getting whacked in the head by a flag that represented water about as beautifully as one could in that situation. She was also Lin-Manuel Miranda’s chance to be the youngest EGOT winner. Alas, “How Far I’ll Go” lost to LaLa Land. Really LaLa Land, not LaLa Land and then Moonlight. Just LaLa Land from the start. 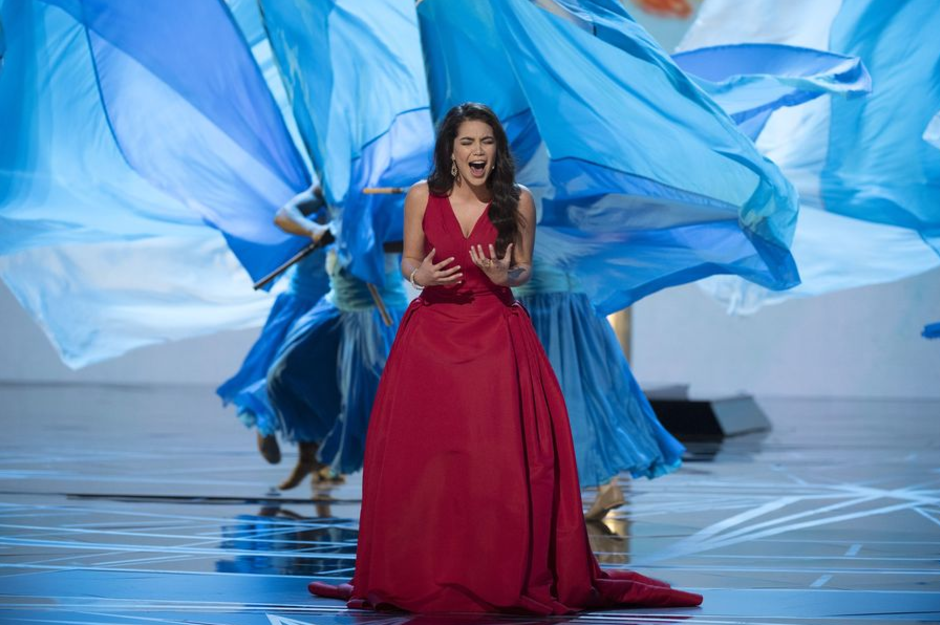 When Celebs Get Hangry
Jimmy Kimmel dropped candy from the sky in tiny little parachutes to keep his audience happy throughout the night. I LOVED THAT.

Can Viola Davis Do Wrong?
That answer is, “No.” She will hold her dress like that during her entire acceptance speech. Stop complaining! 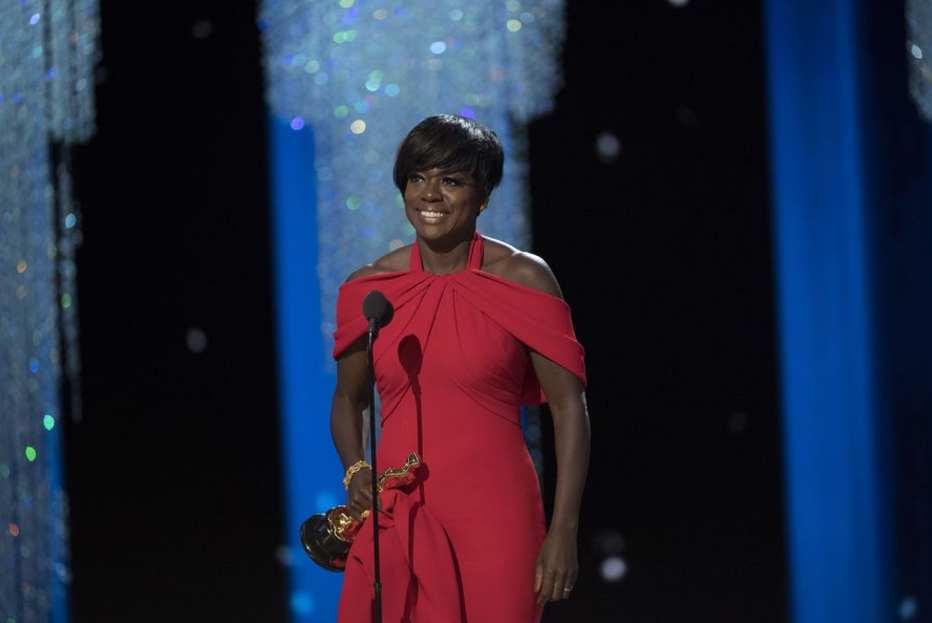 How Long Is A Year?
Zootopia won for best animated feature. If you’re like me and you feel like that movie is been out forever and you can’t understand how it could be nominated for an award in 2017, I have some news for you. Zootopia came out five das after the 2016 Oscars. Winners were still celebrating at the Vanity Fair after party and cursing themselves for not remember to thank their significant others when Disney was pushing that sloth clip like it was going out of style.

Celebrity Zoo
Jimmy brought in a bunch of folks who were on one of those tour buses that takes people around to celebrity houses in Hollywood. They walked into the auditorium to find a jillion stars staring back at them as if they were zoo animals. Nicole Kidman, Ryan Gosling, and Meryl Streep did a great job being gracious since they were on the front row. Jennifer Aniston gave away her sunglasses, per Jimmy’s prompting. Denzel married a lovely couple. I thought it was hilarious. 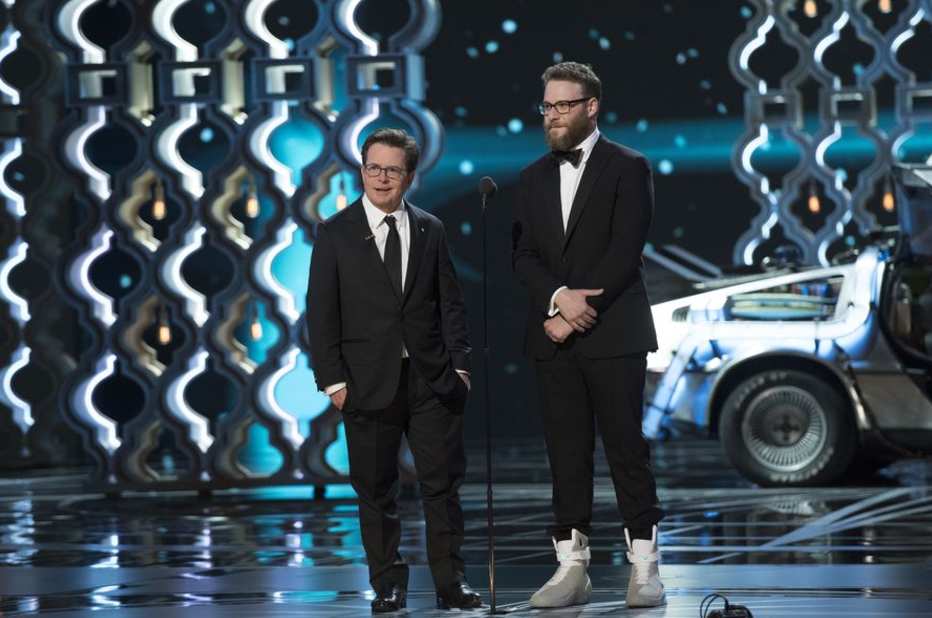 Let’s Make “Lion King’d” An Official Verb
Sunny Pawar was the little kid from the movie Lion. He is about as adorable as they come. I love how he rocked a smart tuxedo with adorable green kicks. Jimmy Kimmel Lion King’d him out of his seat as Lemon Drops and Junior Mints fell from the sky. It was magical. 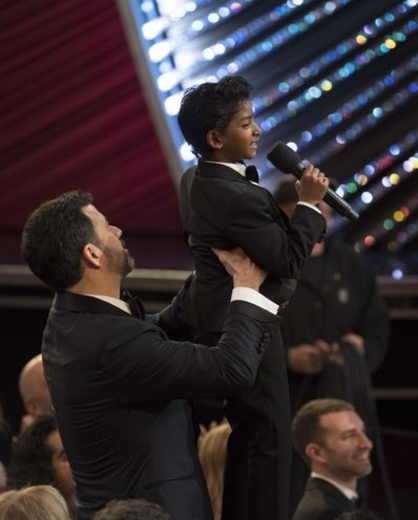 Hey @realDonaldTrump u up? 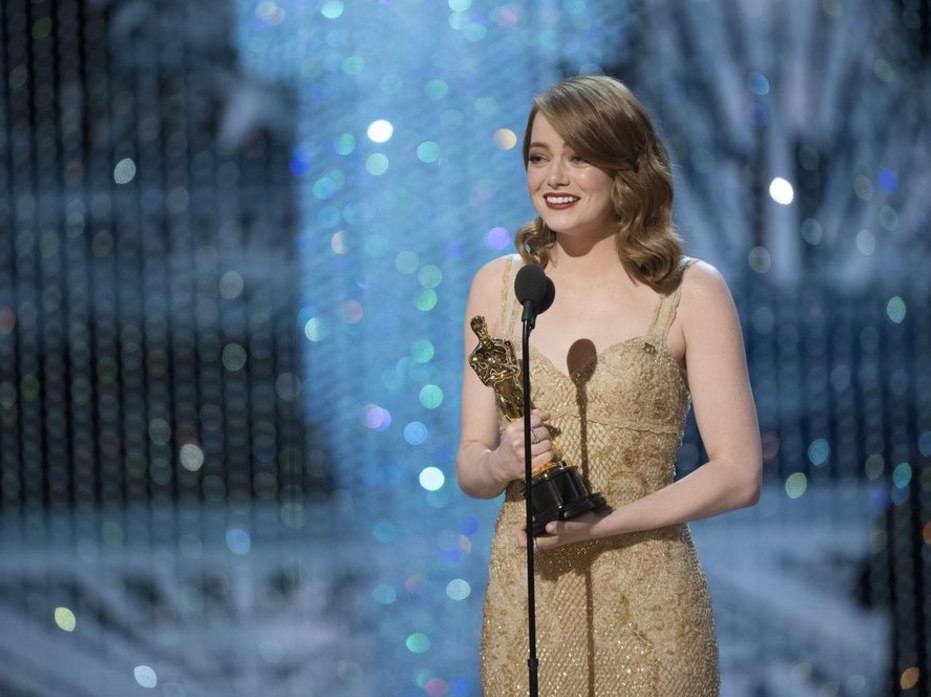 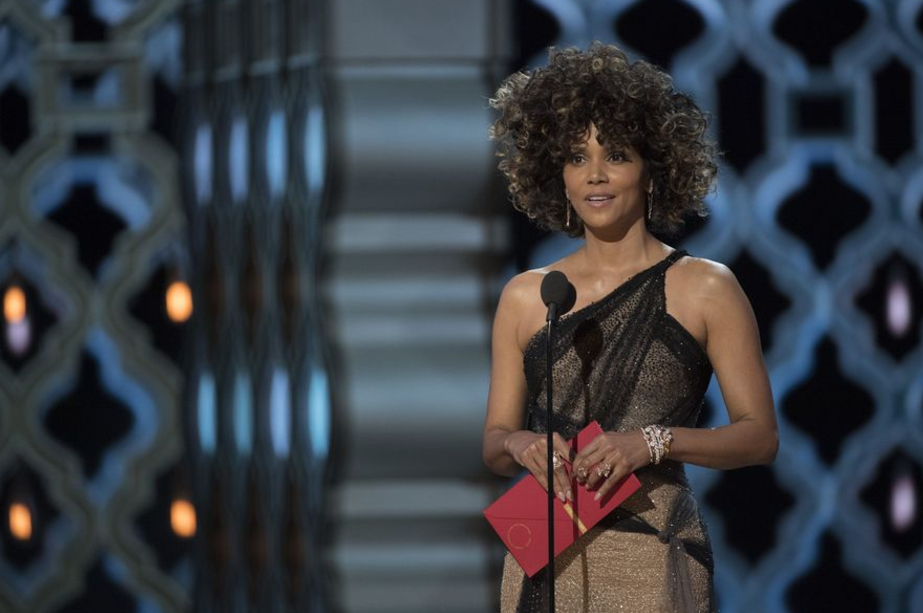 What did you think about the 2017 Oscars? Did your favorites win? Does Casey need a bath? Were you shocked at the Best Picture moment? Sound off in the comments section!

I saw Billy Eichner’s tweet last night and thought it was hilarious. Then I saw this article this morning. http://variety.com/2017/film/awards/oscars-in-memoriam-segment-janet-patterson-wrong-photo-jan-chapman-1201997597/

Spot on about the 16 year old getting whacked in the head with the flag – it definitely happened but she handled it so gracefully! And at 16?! SO impressed!!

As much as I like Viola, she sounded almost self-gratulatory, and quite self -adoring. No, Viola, you and your artistic clan are not the ONLY ones who celebrate life. We , regular folks, know plenty about life and reasons to celebrate it. You- by the virtue of your talent- can only portray it. When you happen to “touch me ” while doing it, you just become a great actress. And that is all.

agreed — that was a weird thing to say. lots of people celebrate life. i’m still a bit puzzled by the comment. love her though!

LIN SHOULD HAVE WON. HE IS AN AMERICAN TREASURE. My only comfort is that he’ll probably win an Oscar in a couple years for Mary Poppins Returns.

JT……best intro ever….So cool how everyone was up dancing and genuinely having fun. Jimmy Kimmel did a great job start to finish. I thought his Matt Damon rivalry jokes had played out weeks ago until he said Jimmy said ” I remember when I was the FAT one”
Bummer about the end….poor Warren

This made me laugh Lincee – thanks for posting! I agree JT in the hizzay should be brought back every year. Is he available for wedding receptions, you think? So glad Emma Stone won. She was as adorable as ever. A friend of mine commented that the end of the Oscars was a lot like the end of La La Land. I’m just going to pretend like both alternate endings were actually reality.

I’m thinking Warren showed Faye the card as in WTF and all she saw was LaLa Land so she announced it.
Also Denzel looked outright angry as Casey was up there accepting the Best Actor award.

Lincee, I thought the exec producer was doing a fine job until he grabs the card out of Warren Beatty’s hand as he appeared to be trying to get to the mic. You can even see Jimmy mouth the words “wow” as he grabs the card. I know that we can’t judge how someone would act in that moment, but I think he should’ve let Jimmy or Warren handle it. The guy who made the mistake won’t get fired; mark my words. He even tweeted a photo (now removed) of Emma Stone back stage post award. Maybe he should’ve been paying atenetion to the next award (best picture) rather than tweeting? Thanks for letting me know who that was with Ryan Gosling…it was driving me crazy! Love the post.

I could not figure out how Jordan Horowitz made sense of what was going on around him to figure out they had lost while giving his speech, but then I read later that he already KNEW they had lost, but decided to thank everyone while he had the chance. So now it kinda makes sense. I agree he handled it so graciously. I especially loved his response to Jimmy telling him ““I would like to see you get an Oscar, anyway, why can’t we just give out a whole bunch of them?” by saying “I’m going to be really proud to hand this to my friends from “‘Moonlight.'” LOVED THAT!!