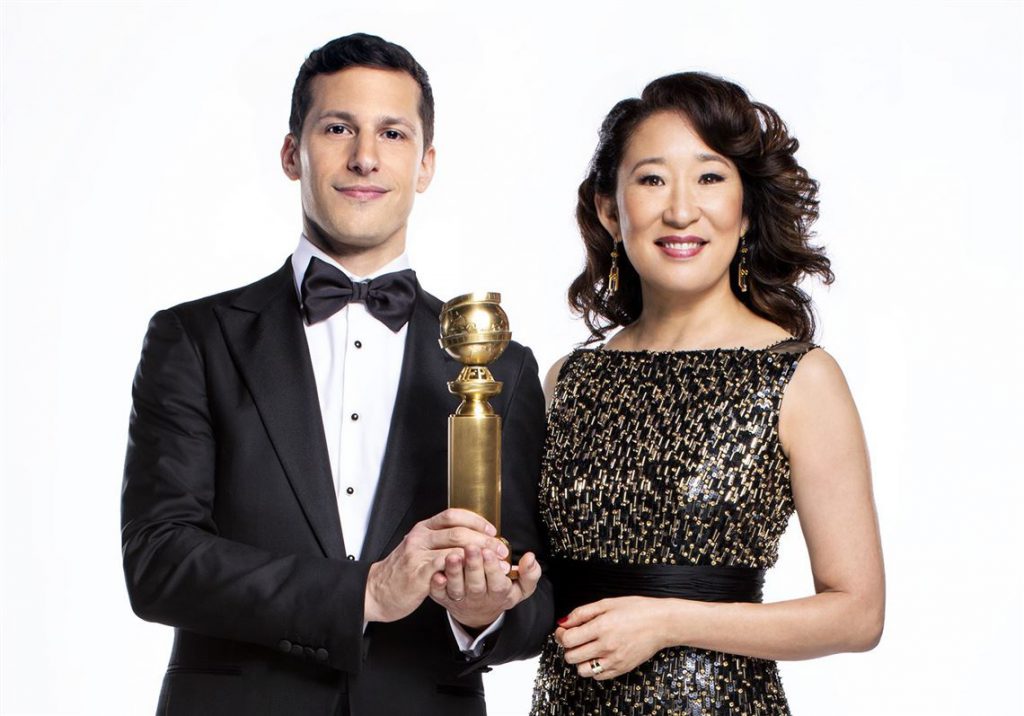 My Thoughts on the 2019 Golden Globes

The 2019 Golden Globes were no different than any other Golden Globes from years past. I spent most of the night asking myself, “Where do I know him from?” and “Has anyone ever heard of this film/show/limited series?” and “What is a limited series again?”

Inevitably I find myself Googling the names of obscure movie titles, only to learn they are actually a TV show on the FX channel. I channel which I forgot existed.

Then there’s the fashion. Some folks nail it like the entire cast of Black Panther, proving that we all need to move to Wakanda to drink their water so our skin can look that good all the livelong day. Others miss the boat entirely, insisting on wearing bedazzled jackets without a tie or starfish earrings.

And what was up with the cold cleavage this year? I’ve never seen so much sternum in my life. Nurse, prep the patient for heart surgery, STAT.

One thing I did do, that I haven’t done in a long time, as laugh at the opening monolog. Sandra Oh and Andy Samberg took a unique approach this year. Instead of poking fun at the nominees sitting in the audience (forcing me to hide behind a couch cushion for the majority of the show), they poked NICE things. For example:

“Hey Bradley Cooper. You are hot.”

“Gina Rodriguez — you a snack.”

“Hey Jeff Bridges — I wish you were my dad.”

Sure there was a weird part when they asked Jim Carey to move from the coveted movie star pit to the TV section in the back, but I forgave them. I also forgave the audience for laughing at Sandra Oh when they thought she was doing a bit, but it was a real moment with an “I see you” message. We were all confused. It’s okay.

Speaking of confused, I’m going to assume that the teleprompter person was a disgruntled employee who wanted to make sure the director of the 2019 Golden Globes didn’t get an award for his or her own work this year. Numerous presenters complained about it going too fast, or not understanding whose turn it was to speak.

But Sandy and Andy were always able to pull it back together with one well-timed joke.

Andy: “Our next nominee managed to carve out a career for himself, even though he’s butt ugly. Ladies and gentlemen, Mr. Chris Pine.”

Additionally, any shot of Sandra Oh’s parents, especially after she won for Killing Eve, was worth its weight in a golden globe.

I want to squeeze him.

Here are some other thoughts I had during the broadcast:

Why is Bradley Cooper in all white, except for his bow tie? Has he always had a baby face under that five o’clock shadow? Who wins in a perfect eye contest: Bradley or Pine?

Did Lady Gaga dye her hair to match her gown or Bradley’s eyes? And how did she stuff all of that dress under the dinner table?

What is the age difference between Catherine Zeta Jones and her Golden Globe winner husband Michael Douglas? (Answer: 24 years)

Is there really going to be a Three Stooges reboot? Or was that a joke about The Favourite cast? (Answer: There is no reboot, but a ton of people asked Google last night if that was a joke.)

Leonard from The Big Bang Theory looks drunk. Or high. When you have that much money burning a hole in your pocket, shouldn’t you have someone in your entourage dedicated to making sure you don’t fall over on stage?

Richard Madden won for best TV actor in a drama in The Bodyguard. No, this is not a remake of the Kevin Costner/Whitney Houston epic love story, but he does play a man who guards a body. Many know him as Robb Stark in Game of Thrones, but he will always be my favorite Prince Charming.

Do we have another “Best Blue Eyes” contestant on our hands? Should Chris and Bradley be worried?

The Americans won for best TV drama and all I could think about was Felicity’s cold sternum. And how the show jumped the shark when she chopped off her hair. (Felicity…not The Americans.)

I’m concerned about Jamie Lee Curtis and her love of tangerine tanning lotion.

Why is Lucy Liu wearing a shower curtain as a dress?

Carol Burnett won the inaugural Carol Burnett Award for outstanding achievement in television. She is 85-years-old and was introduced by a gushing Steve Carell. I loved every party of her tribute, but this has always been my favorite Carol Burnett TV moment.

This is my favorite Carol Burnett movie moment.

Idris Elba can pull off an emerald green suit. It’s as if he’s the sexiest man alive. Oh wait…

Lady Gaga deserved to win best original song for “Shallow.” It’s a shame that A Star is Born didn’t get any other awards of the night. I would have loved to see Bradley Cooper’s blue eyes glisten with tears.

Regina King is gorgeous in pink.

Maya Rudolph and Amy Poehler can do no wrong. Even when a bit where Maya proposes falls like a lead balloon, yet critics think it’s brilliant.

CORRECTION: Vice won the comedy or musical category. This makes all the sense in the world.

Zorro stars Catherine Z and Antonio Banderas reunited to announce the best foreign film. They were darling. Also, we all need to watch Roma.

Jeff Bridges won the Cecil B. DeMille Award. I fast forwarded, but stopped at the part where he celebrated the fact that we’ve been tagged. As in “you’re it” versus “this is me in a group Instagram shot.”

Things we need to watch: The Kominsky Method, The Assassination of Gianni Versace,” Green Book, Roma, A Very English Scandal, Escape at Dannemora, If Beale Street Could Talk, Sharp Objects, The Favourite, and The Wife.

The Marvelous Mrs. Maisel only snagged one award. It went to Rachel Brosnahan for best actress in a comedy. She wore a gorgeous yellow dress with no necklace. Newsflash: I am not feeling this show and have no clue why I’m not on this particular bandwagon. SOMEONE HELP ME!

Emily Blunt and John Krasinski make me warm and fuzzy on the inside. Why wasn’t he nominated for Jack Ryan? And why didn’t she win?

Dick Van Dyke is 93 years old. Marinate in that sentence for a minute.

Janelle Monae is living her best life now. I don’t care if she is wearing a collar made of bottle caps and a golden flower pot as a hat. I’d wear that too if I had her face.

Well I watched, not sure why, but I did. Here are my thoughts. Loved seeing Carol Burnett, Jeff Bridges and Dick Van Dyke. So happy Bohemian Rhapsody won…so good! Sandra Oh’s parents were the cutest 🙂 The worst part of the night is Christian Bale thanking Satan, that’s a first. So weird! My son saw him on a plane, flying to Ireland for a mission trip. That man needs prayer.

I loved the Carol Burnett tribute. She is truly the first lady of comedy. As for the cold sternum dresses–did you see Keri Russell quickly adjusting hers because we were about to have full boob on national television. This is where “hollywood tape” is your best friend, Keri.

I loved Sandra Oh’s acceptance speech and tribute to her parents.

I’m probably the only person in the world that is glad Bohemian Rhapsody won. Rami Malek was wonderful in the movie, as was the rest of the cast. I’ve seen it multiple times. I also saw Star is Born and while a good movie with great music (Thanks Gaga!), it was a remake and was meh, whereas BoRhap moved me to tears with both music and performances.

I must be the only one who thought Andy and Sandra’s intro fell a little flat. I didn’t laugh until Steve Carrell’s intro of Carol Burnett. Love her. Loved seeing Dick Van Dyke with new Mary Poppins. (I must be getting old, I warmed to all the older stars.)
I loved Bohemian Rhapsody. Glad to see it win, and Rami Malek was excellent in it. Too be fair though, I haven’t seen A Star is Born yet. I need to see that.
Lady Gaga’s reaction to winning for the song was touching. She is a very professional performer and a perfectionist. I saw her perform once on Jimmy Kimmel. She sang Edge of Glory, then apologized to the audience and said it wasn’t right. Could she do it over. It seemed perfect both times to us. She then went on to sing several more songs, not for tv, but for the audience, because she liked to perform. Glad she gave up the meat dress phase. I am a fan.
Glenn Close was great too.
Christian Bale is a great actor. I just don’t like him as himself.

Yes! Watch the Kominsky Method! I wished there had been more episodes!