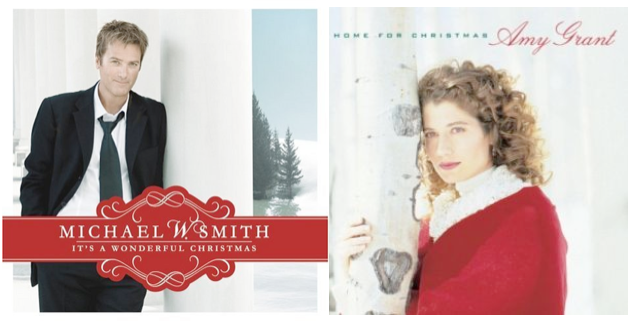 For those of you who grew up in the ‘80s and had any sort of faith-based musical influence in your life, Michael W. Smith and Amy Grant more than likely made up the majority of the cassettes in your totally awesome to the max tape collection. Especially during Christmas.

I was not one of those kids.

A girl by the name of Melissa introduced me to the vocal stylings of Michael W. Smith in junior high and I knew Amy Grant as the girl who sang that forlorn love song “Next Time I Fall in Love” with my home boy Peter Cetera. Within months of knowing Melissa, I was schooled in the deep, emotional lyrics of “Go West Young Man” and “Rocketown.” Amy soon followed with “Thy Word” and “Father’s Eyes.”

When Christmastime rolled around, I became a fan. I still am. That’s why I was first in line when it was announced that Amy AND Michael were coming to Houston for a Christmas show. It was both joyful and triumphant.

Smitty is really into instrumental music nowadays. I’m not one to knock the soothing tones of piano melodies, but when I sit in the cold weather in an outdoor venue in December, my expectation is to sing along with dear icons as they belt out favorites carols from my worn out old cassette tapes while I stuff my face with chocolate covered pretzels and popcorn.

Amy and Michael are E-X-A-C-T-L-Y the same as they were three decades ago. That’s code for: The beginning of the show was a whole lotta cheese — in the best way possible. Once Amy changed her stunning emerald green dress for a temperature-appropriate wool coat and scarf, she seemed to be more of herself than the teeth-chattering songstress complaining about the weather.

In an nutshell, Amy knocked every performance of every song out of the park. Michael was her piano accompaniment for the most part, and everyone seemed to be okay with it. Mostly because Amy has some stellar Christmas songs that we’ve all come to know and love as our own. Let me just say this: “Tennessee Christmas” and “Breath of Heaven” were everything I wanted them to be. And more.

Michael performed with one of his back-up singers (I hate that I can’t remember her name because the girl was gifted) a song called “All is Well.” He originally recorded the song with Carrie Underwood, so you can imagine the pipes on this girl. What a range!

After the song was over, it was Amy’s turn again and she said something that stuck with us all. She calmly tuned her guitar and casually said, “What a beautiful song. But some of you may not feel that all is well. You may feel tired, frustrated or lonely. Just remember…that is what you feel. It’s not who you are. You are loved.”

Then she sang “Emanuel God With Us” and I may have cried.

When Smitty and Amy left the stage, we all cheered them back on for an encore. My friend Lara and I jokingly started shouting, “FRIENDS ARE FRIENDS FOREVER!”

Dear reader, I am not kidding you — that is the next song they played. My other friend Natalie demanded that we all stand in a line, side-by-side, and sing the song with as much passion as we did back in 1987. I don’t know if it was fear of Natalie disowning us or the urgent pull of a nostalgic moment, but we obliged. The swaying left to right came naturally. We sang each and every word as grown adults, clinging to the side of the one beside us, happy that we have each other to call by the name of friend.

I may have cried again. Especially when Emily showed me the picture she took of that sweet moment. She’s our resident photographer and we love her for that.

If you are interested in getting to know my friends Michael W. Smith and Amy Grant (I think they’d be okay with me calling them that), here are a few of my favorite Christmas songs that will give you a sweet glimpse into my love and affection for these two artists. Let me know what you think!

Home For Christmas
1992
“Emmanuel God With Us”
“Breath of Heaven

Spirit of Christmas
2014
“All Is Well” (with Carrie Underwood)

PS: I know there is one particular song from Amy that many of you are wondering why it’s not on the list. Any guesses?

Love Amy Grant & Michael W. Smith!!! Their Christmas songs are my fave and I can’t wait to play them each year. Sounds like a fun concert!! Wish they would come to Washington!

Lincee- I feel like this was written specifically for 9 year old me. 🙂 That sounds like a great concert and I got chills just reading that you had listened to him sing “All is Well”. My sister and I went to his Christmas concert 5 years ago and he sang it at that time, too. It was one of the most beautiful songs I’ve ever heard in person! He also played “Friends are Friends Forever” and we cried because we were trying so hard to stifle our laughter. 🙂

I love these two! I fell off the boat with Amy when she got divorced and you know, married Vince Gill but that’s neither here nor there and I’m over that now. ha. They are both so talented, I think Smitty was one of the first Christian artists I ever hear. Him and Steven Curtis Chapman.

Breathe of Heaven is one of my all time favorites. Soooo pretty and worshipful! (Is that a word? Is now.)

And Friends are Friends Forever? ICING ON THE CAKE, so jealous.

Oh and I ‘m guessing Christmas shoes? Doesn’t she sing that one?

Last week I saw Michael Smith in concert in Detroit! He was fantastic. He did All is Well with his back up singer and you are right! She was amazing. Next time, I hope Amy Grant joins him in Detroit.

How could you leave off Heirloom! I can never find it and each Christmas end up pulling out the classic cassette tape #upintheatticdownonmyknees

That’s got to be it.

I saw the same concert in Dallas and may have cried…love those old songs and new.