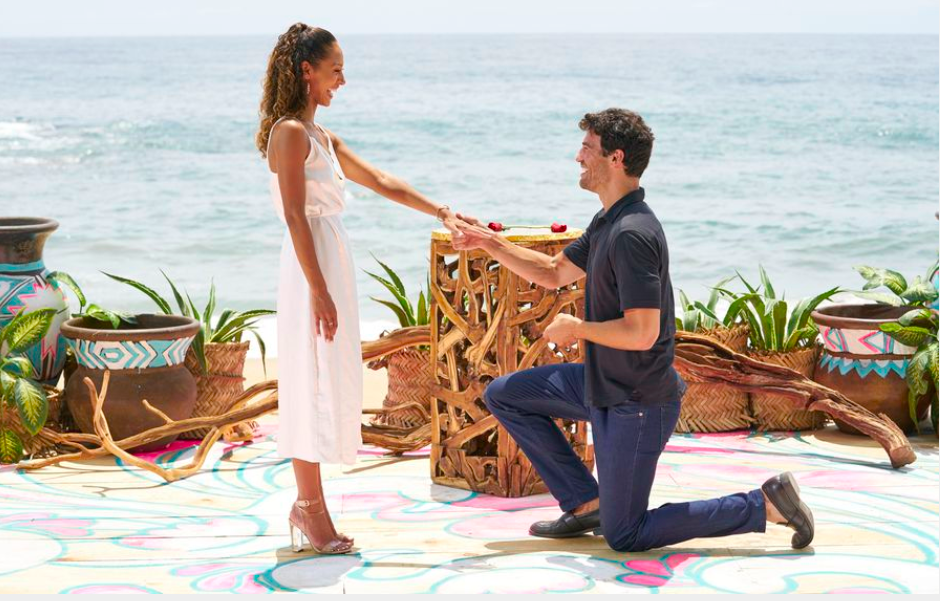 Extenuating circumstances have forced me to write an amended recap for you this late night, early morning. But let’s face it. All you really want to know is who left the beach broken-hearted and who left the beach with a ring on her finger.

Or who left the beach with a bro on his back.

See for yourself below and check out my Spotify playlist for the last installment of the Bachelor in Paradise Season 7 Finale!

“Don’t You Forget About Me” by Simple Minds

Noah and Abigail really do break up. He seems genuinely sad about it. Mari announces to the group that Noah had questionable feelings about Abigail for “quite some time,” which is technically untrue. Still, no one except a weeping Serena seems to care since they are all drunk. Both Noah and Abigail leave Paradise Prom in a rejection SUV that they presumably always have waiting on standby just in case some shoeless guy wearing suspenders needs a ride to the airport.

It’s also important to point out that the fake nails from the Santa Maria Hotel gift shop are atrocious. Moving on.

The next day, the rose ceremony ousts two more of our contestants. Natasha and Chelsea are officially without relationships. Ed chooses Mykenna and Aaron chooses Tia.

Wells comes in the next morning with his best friend Deanie Baby and his girlfriend Caelyn. The trio drops a major bomb. PARADISE IS OVER. The couples must decide right now if they will leave together, leave separately, or leave engaged. Some serious conversations must be shared one by one.

Becca thinks Thomas is too good to be true. His perfection seems suspicious, and she tells him so. Becca thinks she doesn’t “fully know” Thomas and feels it’s best if they don’t continue anything beyond Paradise.

Thomas is beside himself. He cries all the tears and wonders why Becca would call something off for being too wonderful? It just doesn’t make sense! Finally, through snotty sobs, he tells her he will trust her, even though it sucks. He schleps his tall body up the cobblestone steps to the rejection SUV, and we hear Becca hollering after him.

Will this be a moment when she runs into his arms? Will she ask him to be her boyfriend outside of Mexico?

Nope. She just wants him to know that he really is a great guy, and she genuinely cares for him. Becca pulls him into a hug, and the giant man begs her to, “Let me go!”

Thomas continues to cry big tears into his lap. Becca does not. All of her tears are still on the yellow couch from when Arie dumped her on national TV. She’s all cried out.

Ed thinks since he talked Mykenna into asking him on the date, he can swing an invite to the fantasy suite. He lobs the suggestion up with an easy-breezy, “I know we just met, but I’ve developed deep feelings for you.”

Yeah. Mykenna quickly responds with a strong, “I don’t feel the same way.”

Ed gently prods to see if she wants to see what happens if they try and make it work. Mykenna couldn’t care less. Ed all but asks her to drop it like it’s hot, and she finally says, “you are not my person,” which is the new “right reasons.”

Mykenna eventually has to physically remove herself from Ed’s presence before he gets the point that she is uninterested in his advances and will not be joining him in the fantasy suites.

“California Dreamin’” by The Mamas & The Papas

When James pulls Anna aside for their big talk, she launches into a “pick me, choose me, love me” premeditated speech. First, James claims he isn’t in a place where he can see himself falling in love. Then he rubs salt in Anna’s wound when he tells her, “We owe it to ourselves to not adjust our standards.” Ouch.

James leaves Anna crying on the wet, moldy beach bed as he bounds up to the place where the boys are all sitting around doing nothing. He points to Aaron and says, “I’m headed back to San Diego. You wanna bounce? We came into Paradise together. We should leave together, bro.”

“I Can Love You Better” by The Chicks

Aaron finds Tia in the hallway and tells her that he’s headed out to SD with his bro, but he’ll get her digits later. She gives him a WTF look, and he about faces onto the back of James. They profess their love and bro out in the rejection SUV all the way home.

They are the true winners of Paradise.

Riley and Maurissa do celebrate their love in the fantasy suite. Riley tells Maurissa that he’s always dreamed of Sunday morning, with the pitter-patter of little feet, early breakfast, playing, and a faceless woman who completes the pictures.

Maurissa is his Sunday morning.

He ends up proposing to a dripping wet, sweaty mess of a woman in an electric blue pantsuit. But Maurissa is happy. All she ever wanted was to be engaged. And Riley will do just fine! He’s alive and breathing.

Kenny and Mari go to the fantasy suite, where they discuss how Mari is mature for her tender age of twenty-five. She’s ready to be married to the old man, so he proposes, and she accepts. This will last a hot second before she decides she’s not ready to raise her children as boy band members.

“I Love You” by Martina McBride

Joe and Serena are too cute. Their entire courtship is adorable. Joe is ready to propose, and we all think it’s going to be just as darling until Kendal, of all people, traipses down the cobblestone steps. COME. ON.

Why is Kendal there, you ask? Excellent question. Joe is wondering the same thing. She wants him to know that she’s happy for him and Serena (boo) and couldn’t leave the beach without him knowing he’s an amazing person (whatever) and that she will always care for him (blah).

Joe smiles and sends her on his way.

When Serena makes her way down to the proposal pedestal, he immediately tells her his ex just showed up, to which Serena exclaims, “Oh no! Are you okay?”

This is why Joe loves Serena.

Joe claims that this moment is when he knew it would work with Serena. I have high hopes for them. We shall see what the future holds!

What did you think? Who will make it? And will you be watching Michelle’s season starting on October 19? Sound off in the comments section!

I couldn’t get past the crappy carnation prom corsages, personally. But I’m also willing to bet that none of these people get past the required contractual period of togetherness.

I haven’t been this excited about a Bachelor franchise moment (James and Aaron leaving together) since Nick kept all the money!

Aaron and James stole the show!! I hope Serena and Joe live happily ever after.

I honestly could not stop laughing over those two… and they way Aaron rushed Tia through the “break up” so he could jet was hysterical.

I enjoyed Aaron’s breakup with Tia too. He could not ditch her fast enough.
Good grief!

I think Serena and Joe have a good chance of making it. There was no need for Kendall to be there (except the cold hearted producers wanted the drama.) I enjoyed the comments at the end about how the couples are doing now.

I enjoyed the updates as well.

The odds aren’t good for any of the couples to make it since they’ve only known each other three weeks. This was a boring season and a really boring episode. My favorite part was when the guys said it was “so Ed” of him to try to convince a girl to go the fantasy suite with him that he just met yesterday.

thanks for hanging in there, Lincee. I hope the Bachelorette is more exciting.

I loved when Joe told Serena his ex was just there on the beach and what is the first thing out of Serena’s mouth?
“Are YOU ok?” Speaks volumes to her maturity. Total class act. Did not make any of that about her. I am impressed.
Aaron and James, hysterical. And finally, a random note, is it me or does Becca always sound like she has a cold? Thanks Lincee for another season of recaps.

THE BEST PART OF THIS EPISODE was when Aaron jumped on James’ back!!! Pure Joy!!! “He aint heavy! He’s my brother!! https://youtu.be/Jl5vi9ir49g

Oh Lincee, the Chris Farley SNL reference about living in a van down by the river had me laughing so hard I nearly fell off my couch.
Thank you!

I read that after the show Abgail and Noah did get back together. Also Becca and Thomas got back together. I hope Joe and Serena make it. So cute and even made it through and ex being in the mix.

Did anyone notice the can of pink paint sitting on the proposal platform? I can’t remember who was walking by in the sand when I saw it! I hope that Joe and Serena make it…they are too cute. I don’t see any of the others lasting, except for Aaron and James!

Can I just say that Wells did a great job and I absolutely think he should get the gig going forward.

Agreed! He was fun to watch!

All of the couples at the end really surprised me! When I started watching at the beginning of the season, I could not have pictured those three couples making it to the end. They all seemed sweetly into each other and I’m rooting for them, especially Riley and Maurissa! I thought it was both funny and cringeworthy that Mykenna had to politely decline Ed at least THREE times.

I’m definitely going to watch Michelle’s season, I remember she was really funny in the little outtakes/bonus scenes they’d show at the end of the episodes on Matt James’s season. I’m also pre-disposed to like her, as a fellow Michelle. 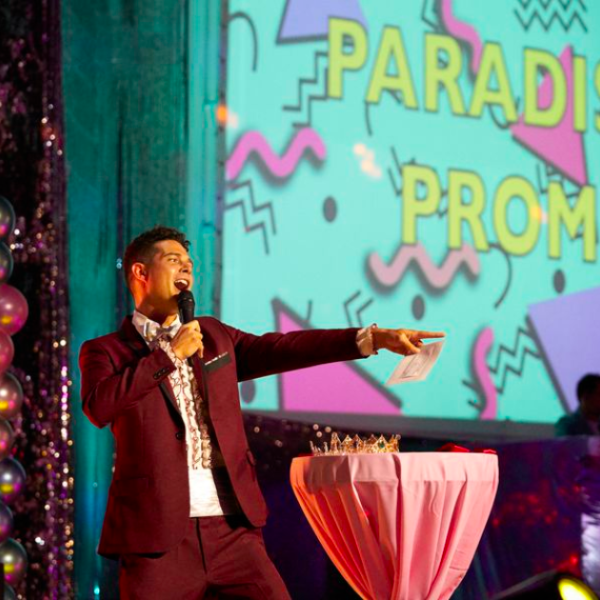 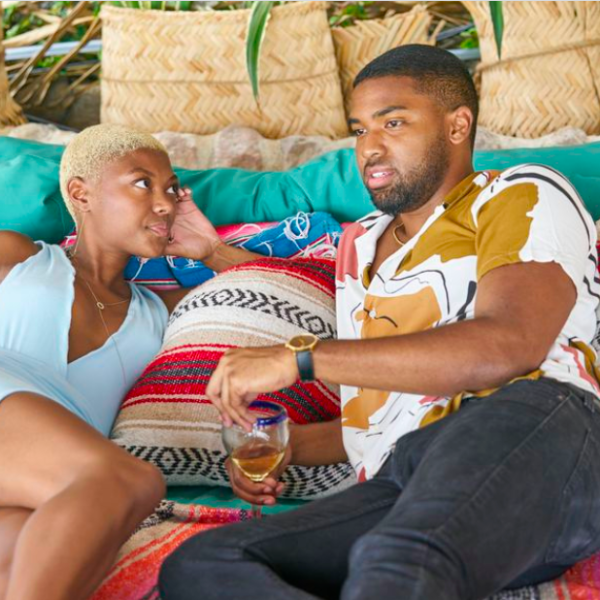 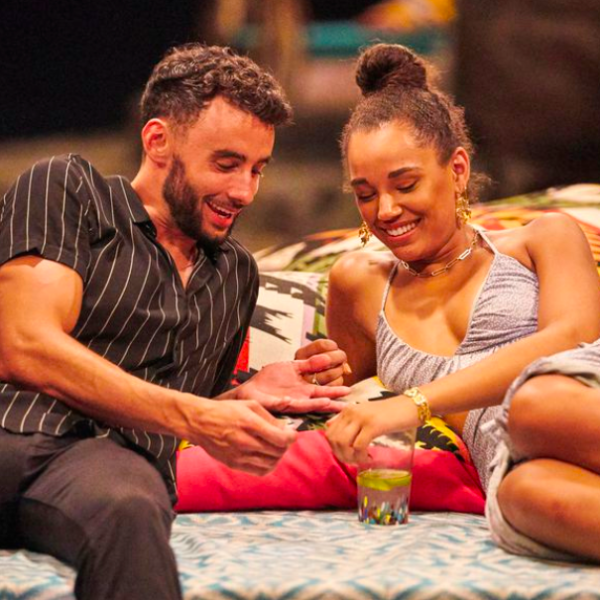