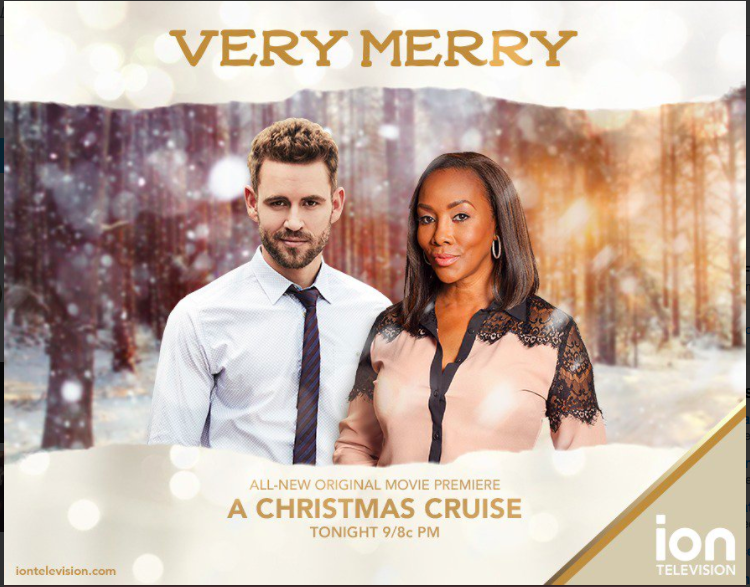 Bachelor Nick on ‘A Christmas Cruise’

Thanks to several savvy IHGB readers who reached out to me, reminding me that a blessed event was about to unfold before our eyes, I am happy to report that I watched The Christmas Cruise featuring none other than season 21’s Bachelor Nick Viall.

Now when I say I “watched” this made-for-TV movie, I mean I gave it a solid 20 minutes before I started to fast forward in search of my favorite franchise villain. Will Nick be the love interest? Is he going to sweep leading lady Vivica A. Fox off of her feet? Or better yet, will he be working in the city, wearing faded Army green skinny jeans as he masters the art of looping a jaunty neck scarf instead of noticing that his girlfriend is about to find true love on a Christmas cruise?

My first quest was to figure out how to tune in to witness what I hoped would be an Emmy-reel performance from Nick. That proved more difficult than I imagined. I had never heard of the ION channel and a DVR search for Nick’s name turned up as a dead end. (#blessHisHeart) I finally found ION surrounded by a ton of channels I’ve never heard of, but fully intend on researching thanks to the wonder that was The Christmas Cruise.

My roommate Lara and I nestled into the couch with drinks in hand, ready to accept whatever ION had to offer. My fingers danced around the home keys of my laptop, ready to take diligent notes. After writing “I’m bored” and “Vivica’s skin is so smooth and pretty — look up to see how old she is” Lara and I became distracted by the predictable plot in lieu of playing a fun game of, “Where have I seen this B-class supporting actor/actress from?”

The answer was always Young and the Restless, General Hospital, and Days of Our Lives. Clearly ION is where soap opera actors go to make movies if they can’t find jobs in Hollywood, Lifetime, or on the Hallmark Channel.

Once we figured out Arlo was Shawn Douglas Brady from Days of Our Lives, we quickly decided to fast forward. I couldn’t force myself to recap the entire movie, so I opted to recap Nick’s parts.

Feast your eyes on THIS clip!

Have you ever seen someone deliver four lines with such aplomb? Look how he holds those towels! And that line in the middle with the slow head nod. I can see him actually trying to figure out all of the possible scenarios for why Vivica’s sleeping arrangements aren’t satisfactory. It would have been so funny if he had said, “Not enough rose petals in the fantasy suite?” Also, way to go Neil Winters (Young and the Restless) for keeping the abs tight. Woo hoo!

Below is another reason why I didn’t recap the entire movie. Nick only has two scenes. Here’s the second clip I accidentally cut off at the end, but didn’t have the energy to go back and re-record. Trust me when I say that he didn’t have another line after this one. I can’t be sure, but I think my finger slipped on the button because I was giggling. Sorry!

Who would have guessed that Nick is the best friend who offers sound advice to the male love interest. And he offers it in a sailor suit. I couldn’t love it more.

That was THE worst movie ever. I had to finish watching it the next day when I could ff through all the commercials. Even Kevin fell asleep. Snoring.

I do have one question–was the Santa handing out gifts at the first party our Bachelor Nick? And the shirtless Santa who drove up in a golf cart? And was the voice over of our ‘indefatigable captain” really Captain Nick? I guess that’s 3 questions. And that seems like a pretty big word for Nick.

Ha!!!!! I literally was working out at the neighborhood gym last night and a tv movie was on…this one! I thought I was going crazy when he came on! It WAS him!

He also made an appearance on the ABC TV show Speechless a few weeks ago. He was playing a character, not making an appearance as “himself”. So I guess he’s an actor now? Guess he wasn’t in it for “the right reasons”!

I thought that I was seeing things when I saw Nick! I asked myself, “Self was that Nick from ‘The Bachelor’ who had a tough time finding love?” I quickly googled his name with the name of the movie and voilà – low and behold there was his name as a cast member. By that time, I saw him in his second scene in the deck with his friend. Wow! Who will I see next?