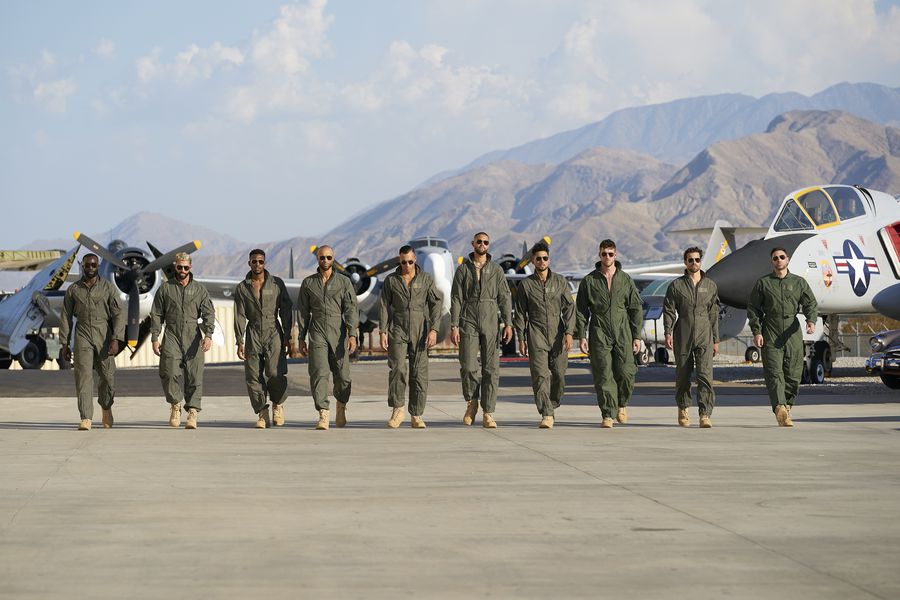 I think my bracket is officially busted, but I’m fine with that result. I had producers keeping jack wagon Jamie around for another week of manipulation. So it is with great joy that I announce our sweet Michelle sent him packing with a curt, “Good-bye.”

Of course, Rick was the one who helped peel away her rose-colored Jamie glasses. I still think something shady is going on with that guy, but I appreciate his willingness to break the cardinal rule by using his precious alone time to discuss house drama.

Yes, he seems off, but I do wonder what eyeliner he uses. Do you think it’s a tattoo? Or could it be natural? If so, I’m angry all over again. Why would the Lord bless this dude with natural eyeliner, and I have to paint mine on every morning.

Life is so unfair.

FIRST GROUP DATE
“I want a man who isn’t afraid of the Danger Zone.”

Buckle up, people, because a little pop culture product placement is coming your way. In case you’ve been living apart from social media the last couple of years, the quintessential Top Gun has a sequel that will hit theaters this summer. As luck would have it, hotties Glen Powell and Jay Ellis (who star in the movie with Tom Cruise) have agreed to help Michelle choose a mate using all sorts of fighter pilot challenges.

Whoever dressed the guys in flight suits and aviator glasses and had them walk in a line toward the camera, sporting their best “suck it” faces, I give you all the props, good sir or madame. Well done. Even the chachiest of the bunch looked desirable from far away.

Michelle arrives in a plane, hops on the wing, bounds down onto the pavement, and doesn’t even wait five seconds to let the guys compose themselves from her in-your-face attractiveness. Instead, she immediately invites Glen and Jay to lead the boys into picking “call signs” for each of the other cast members.

Why ABC chose to edit this piece is a mystery. Only three guys are bestowed new names on air. Little Willy, Dough Boy, and Frosty. Clearly, this is Willy, Pizza Peter, and Martin.

Here is a list of the ones we need to label: Rick, Clayton, Spencer, Nayte, Joe, Olu, and LT. I’m eager to hear your thoughts on call signs for these jokers.

After some old-school calisthenics drills, Frosty checks in on Michelle to make sure she’s okay since the last time any of them saw her, she was hella pissed about her character being called into question. She appreciates Frosty’s concern and immediately sends him into a G-Force simulator with the hope that he doesn’t puke all over himself or the others.

The goal (besides not hurling your guts out) is to tell Michelle how you feel as you’re being swirled around this contraption. Some face the challenge head-on. Others turn green. Dough Boy shouts things in Italian the entire time, which impresses our Top Gunmen. But after some dogfighting (read: shoving each other off of a balance beam), it’s Little Willy who wins the ultimate Maverick prize — a bomber jacket from the movie.

Of course, he just copied Dough Boy. Instead of speaking Italian, Little Willy shouts Spanish nothings in her direction and somehow lands the coveted piece of movie memorabilia. Kudos to the ABC Intern who took the time to both find and stitch a rose patch on the jacket.

Little Willy gets to ride in a vintage car with Michelle around the base, but just because he’s been given the title of “Maverick” doesn’t mean he gets the date rose. Therefore, the boys go all in during the cocktail party.

Clayton spins her around in a circle so she can experience g-force, too. He tries to kiss her right after, but they miss each other’s mouths due to dizziness. They finally find one another and make out properly. Clayton is all in.

Michelle makes out with Nayte and Joe. Not at the same time, but separately. When she comes up for air during her talking head moment, she commends herself for securing such an amazing group of MATURE men.

This is the moment when Dough Boy and Little Willy prove that they are the opposite of mature. Bros were exchanged. “Big dog” was thrown around. The spat makes everyone uncomfortable and ultimately ends with Dough Boy throwing the bomber jacket into the swimming pool. Take that, Little Willy!

By some miracle, Little Willy listens to Nayte and doesn’t tattle to Michelle. He chooses to keep her in the dark, letting her bask in the glory of a drama-free cocktail party. She gives the date rose to Frosty and whisks him away to slow dance as a string quartet plays “Take My Breath Away.”

Would an impromptu shirtless volleyball scene have been a little too on the nose? Probably. Would I have allowed it? Yes. Yes, I would have.

Michelle tells us that she and Rodney will play Truth or Dare around the resort hotel, but it was more of a series of dares with slim to none truths mixed in. First, Michelle has to eat things with a blindfold on. Next, they have to handcuff themselves together and search for the key. Then one must strip naked and run up and down the grand staircase as the other shouts: “THIS IS OUR JOURNEY” in a megaphone.

Rodney draws the short straw for that challenge.

The truth portion of the date eventually comes later. Rodney is vulnerable in all the right ways. He impresses Michelle so much that she tells the camera he is “chipping away at the Friend Zone.”

Rodney and Michelle take a rowboat to dinner. It is straight out of The Notebook if Noah had rowed Allie on a small pond in front of a grand resort in Palm Springs. During the meal, Rodney confesses that he had a hard childhood, growing up with a single mom. But she is his hero.

Michelle applauds her own mother as a hero, complimenting her willingness to stand up for her father many times when faced with the challenge of being an interracial couple. Michelle had to defend her emotions once in a relationship for being upset by a woman calling her an unkind word. She never wants to do that again. Rodney promises to stand by her side no matter what.

She gives him the date rose, and they make out hard before returning to the boat to make out even harder. Rodney’s going places, folks. Mark my words.

SECOND GROUP DATE
“I want a man who can express himself.”

Okay, most of us don’t know who this talented artist is, but Chris G. is freaking out and fangirling all over the place. Michelle is pumped that Rudy is going to help her guys get in touch with their emotions. She wants all the feels spurting from every pore in their bodies.

Brandon takes the task seriously and writes an ode to Michelle that paints her as the one of his dreams. Romeo naturally takes on a Juliet approach. Mollique almost cries. Chris G. channels his inner Eminem. The stories are heartfelt and extremely well-written.

Then there’s Jamie. Who claims he “lost his book” and proceeds to filibuster for most of the afternoon about a girl in the woods. To quote Casey, “It wasn’t a personal story or personal moment. It was like a weird TikTok. His insecurities are showing.”

This is what we call a red flag. Will Michelle wave as it passes her by?

Jamie has been telling the camera that he is the one who threw the entire house under the bus, but there’s no way he’s telling people. Why would he? He also brags that he is the one to beat because he and Michelle have such an amazing connection. He’s got this in the bag.

Cut to Jamie and Michelle. Jamie actually tells her that he chooses to approach every day as if he’s working to own a rose. He never wants to feel safe.

He thanks Michelle for her Def Poetry Jam sesh, claiming he related to the story. (No, duh, Jamie. Everyone did.) Then he beams, telling the camera that he has captivated her.

Well, he didn’t captivate her enough to secure the date rose because that goes to Brandon and his kissing skills. Of course, this angers Jamie, as evidenced by him pulling his handler away to inquire why Michelle is in “Spring Break mode.” Is she just handing out roses willy nilly? Her husband is in that room. What gives?

Once again, I ask myself at least three times every season, “HAVE YOU NEVER WATCHED THIS SHOW?”

Michelle is gold looks AH-MAZING. I can’t even comprehend how she looks better than the previous rose ceremony. Nayte thinks so too, which is why he runs away with Michelle, causing the ABC cameraman to Blair Witch us into the outskirts of the resort.

Never fear. He catches up just in time to secure coverage of the mega kissing.

Michelle walks back into the rose ceremony staging area on cloud nine. She’s quickly returned to reality during her alone time with Rick when he admits that he’s confused by the notion that the guys in the house were questioning her character. It couldn’t be farther from the truth.

Thinking he’s reassuring her for a few seconds before sticking his tongue down her throat, Rick is surprised to hear Michelle out Jamie as the culprit who brought the situation to her attention. Rick immediately tells the two tallest people he can find — Nayte and Casey. They invite Jamie to explain himself.

Ladies and gentlemen, it was a master class of manipulation. To see Jamie dance in and out of the questions and twist his words into something manageable was mesmerizing. Nayte questions if Jamie is threatened by Joe? Casey wants to know why he didn’t come clean night one?

Michelle walks up and immediately feels the tension in the room. Jamie owns the moment and tries to make nice. Michelle reminds him that he told her about the “light-skinned baller” detail he forgot to mention, and all hell breaks loose. She invites Jamie to visit with her outside, where she tells him all trust has been broken. She thinks it’s best if they part ways.

Thankfully Jamie doesn’t utter another word and follows her as she walks him out the door.

Michelle returns to the staging area, cancels the cocktail party, and starts handing out roses to her favorites. Spencer, LT, Dough Boy, and Mollique will join Jamie on his return flight out of California.

I would rejoice that we’ve squashed this season’s villain and problem child, but scenes from next week show that Small Chris is going to take up the vacated bad boy positions. Villains gotta vil, I guess. Bring on the drama. 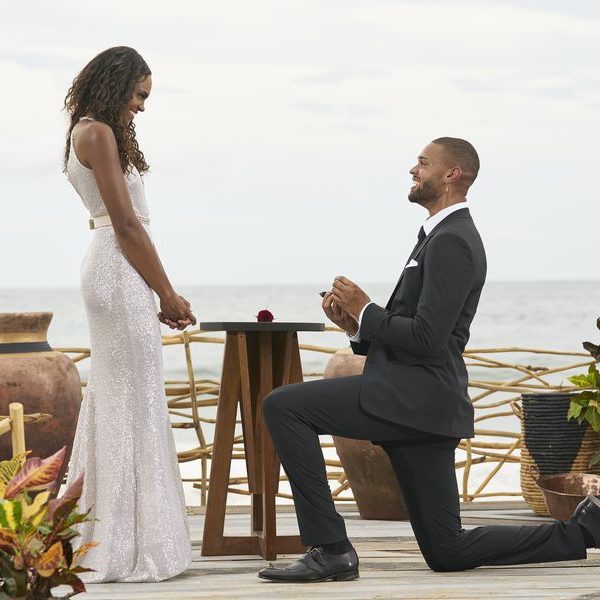 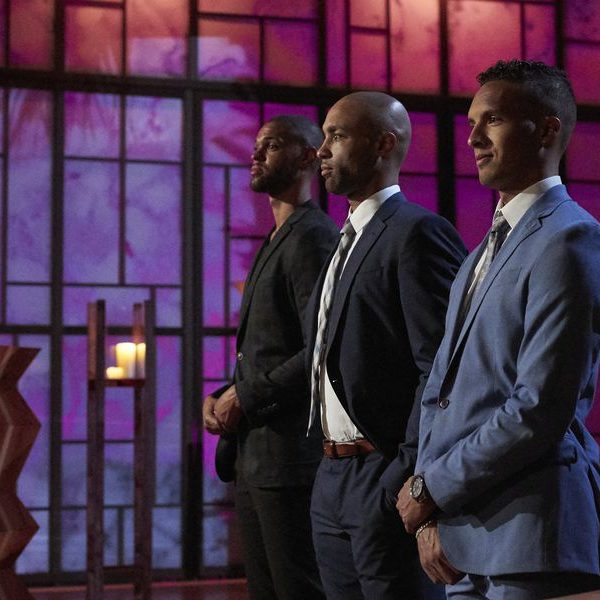 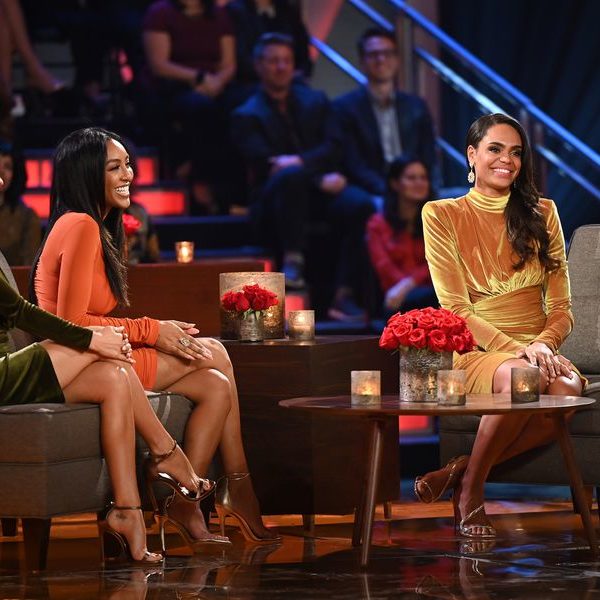 Bachelorette Michelle Recap | Hometowns To keep with the tradition of past…