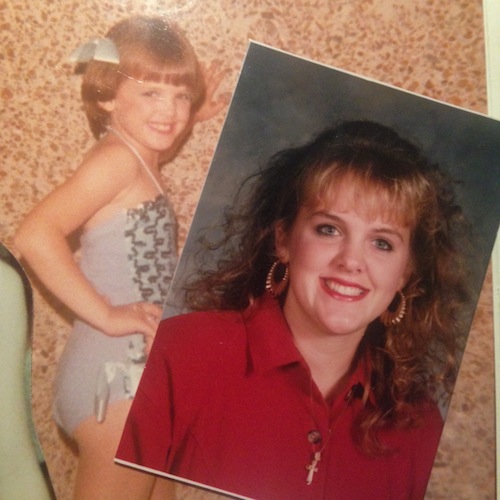 I’ve had bangs for the majority of my life. They were mandatory for the Dorothy Hamill haircut I rocked in elementary school and I don’t think you were allowed to remain a child of the ‘80s if you didn’t have high hair. Or Aquanet.

I guess I can blame New Girl for planting “CUT SOME BANGS WOMAN” in my subconscious, because the idea plagued me the entire week leading up to my hair appointment. I decided to dig out old pictures, trying to figure out when I made the decision to grow them out.

Here’s a picture of me in high school. 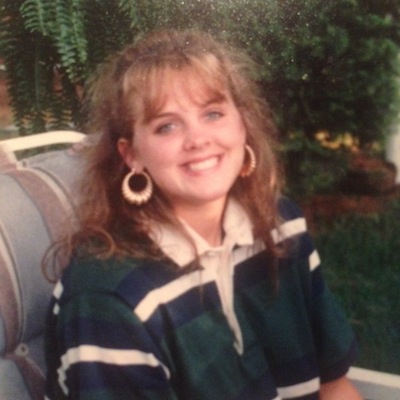 Rockin’ the bangs, as well as a shirt that I must have accidentally found in the boy’s department. Nice.

Here’s one of me in college. 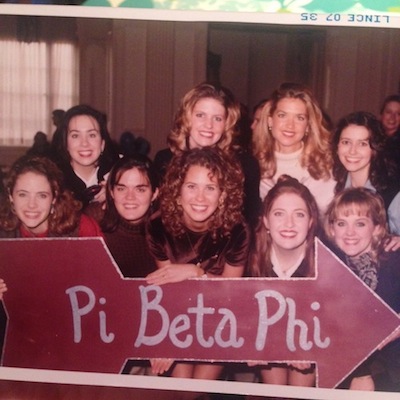 One of these bangs is not like the other. Clearly, the trend had hit the masses, yet I was unwilling to commit. It’s certainly a possibility that I was oblivious as well. I was still wearing a neckerchief for cyring out loud. I’m confident that the animal print was ahead of my time though.

Here’s one of me when I worked at Disney World after college. 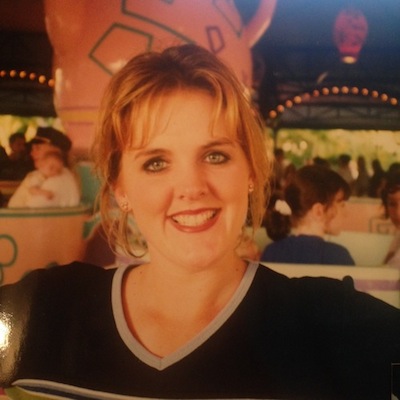 The bangs are doing an interesting “woo-hoo” thing, but I’m unsure if that’s because I was playing around with them or if they were swooped from just riding the teacups.

Then I found this and everything made sense. 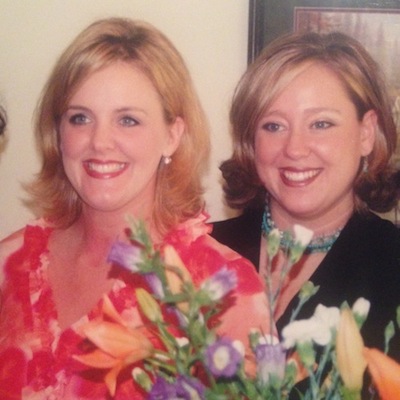 That’s my friend Julie. I’ve known her for 25 years. In high school, she taught me about boys, what not to wear and that it was okay to watch the movie instead of reading the book for English class. (I know what you’re thinking and the answer is YES! I did both like a good girl!) When I left Disney World, she opened her home to me and we were roommates for years. At that point in my life, she taught me about home decorating, good Mexican food and to never, ever wear anything grey because it makes me look a little Hep B.

That was the moment I knew I could trust my friend to tell me the truth, no matter what, in any circumstance. And I have counted on her honesty since that day. I have no doubt that Julie was the one who convinced me that I have the forehead that could handle the absence of fringe.

And it’s been bare ever since.

You can imagine my flurries when I marched up to Ashlee (the girl who does my hair) and told her I was contemplating bangs. She sat me down and studied my head.

The relationship between a woman and her hair person is intimate. I trust Ashlee’s judgement because she takes things into consideration that I never do. My hair has changed over the years. Plus, I no longer have my handy Hot Stix to provide ample curl. And I haven’t owned a bottle of hair spray in years. Can I pull off a straight, bang look and not appear to have a wet mop on my head?

Ashlee would know. And roughly 10 seconds after I sat down in her chair, she gave me an answer.

Ash: I’m not feeling it.

So here I sit. Bangless, happy and proud of myself for listening to the professional, because there was that one time Ashlee said, “DON’T GO DARK” but I did anyway and it was HORRIBLE and I will do whatever Ashlee says until the day that I die. She’s already agreed to go with me if I become rich and famous, so that’s been handled. I don’t know what will happen when a cowboy finally whisks me away. Mama said no one else is allowed to touch my hair. Unless Julie suddenly decides to open a salon. At that point, it will be like Sophie’s Choice.

I hope that never happens.

Lincee! You worked at Disneyworld? OH MY GOSH! Can you please blog about the experience? Preferably multiple times, perhaps a series?! And obviously with pictures!

You got it Amanda.

Lincee!! I have been following your blog for about 2 years now, but this is my first comment. I, too, had bangs for a long time – way past it was “cool” to have bangs. I grew mine out the summer before 9th grade and let me just tell you what an awkward summer that was. (That age is awkward enough without the bang growout phase going on at the same time!) I would either try to casually push them to the side or pin them back with a bobbi pin – both were unfortunate looks 🙂 This entry made me laugh out loud thinking back to that.

Thanks for your hilarious blogs. You always make me smile at work!

Thank you for the sweet comment Kate! I’m sure the bobby pin years were horrible, but look how far you’ve come!!!

I can almost guarantee you will have bangs again …. when you’re as old as I am and need them to cover the forehead wrinkles. So don’t worry about getting them now …. plenty of time ….

I love the title. And now I’m hearing William Hung sing it badly. Which, is kinda TBT appropriate. Anyway…i digress. I’m glad you’ve got Ashley. I’ve seen some fb evidence that I’ve got friends who need an Ashley to tell them the truth. I swear there are some hair professionals in this world who are part psychic/magician! Those people are worth their weight in gold!

Always good to have a stylist you can trust with such critical decisions. For what its worth, you look fab either way. I too vote no to bangs – much lower maintenance hair that way, especially for us gals with wavy hair. Happy Friday Lincee!

Oh! The Pics ‘N Gifts pics! Forgot about those!

I just wanted to share that I too had bangs… in college… and i vividly remember donning a neckerchief to go to my FIRST FRAT PARTY. At Vanderbilt. Jesus.

Thanks for helping me recall those tragic times 🙂

I have to wear my hair up for work. Usually a tucked in French braid or a bun. Bangs seemed like a good idea to mix things up. Except I wore glasses and when my hair was down, I was told I looked like Sarah Palin. WHO I DO LIKE AND ALL BUT WHOA. WHOA WHOA. Grew out bangs, got lasik, ta da, and she lived bangs-free ever after! I am seriously thinking about moving to Alaska… 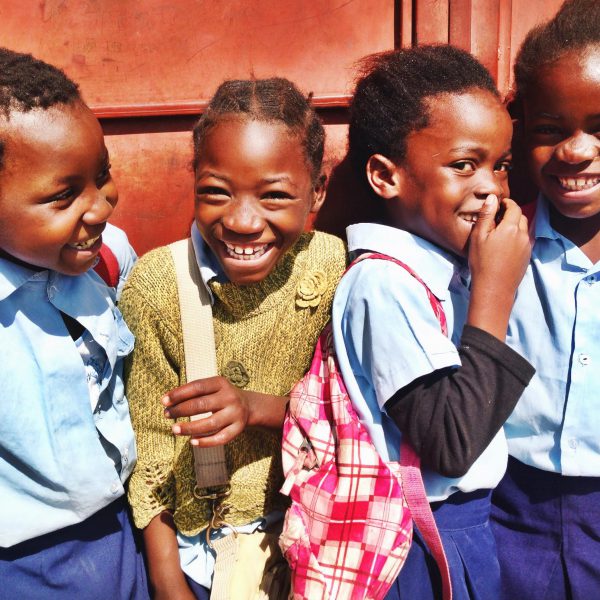 Houston meet and greet with me and Arise Africa!

I can’t tell you how excited I am about an… 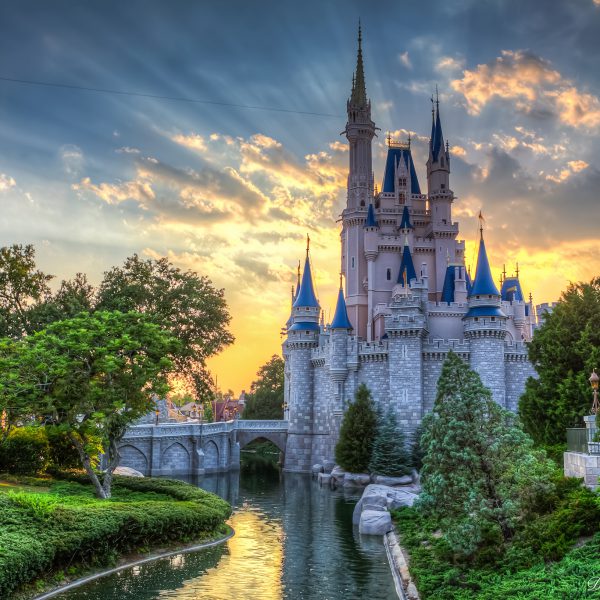 Many of you know how much I love Disney World.… 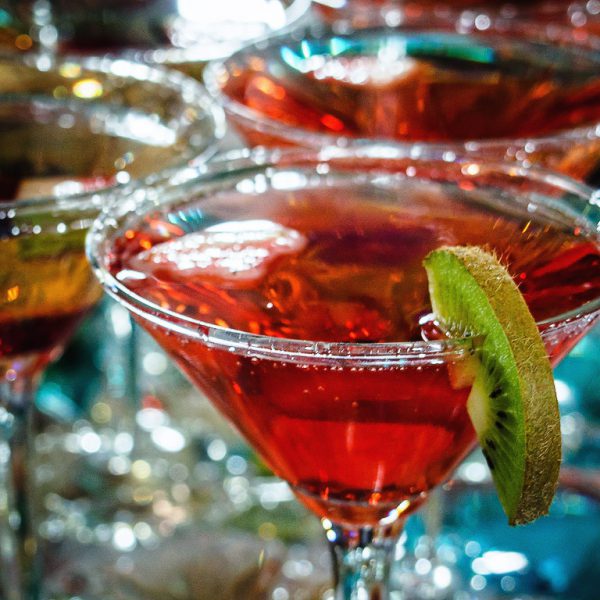 Pimping my friend for a good cause

I hate green beans. Do you know what else I…