Ruti’s wakeup call at 6:45 this morning was tough. I’m not sure if it was the fact that I was up until practically dawn writing or the fact that the local Tiberiusians were partying down in a Jesus Boat on the Galilee Sea right outside our hotel room. Same songs over and over again.

I’m pretty sure this is what they were listening to. Track 14 is Hava Nagila. www.amazon.com. You are welcome.

Since my brain is fried and there is too much to share in the amount of time left I have on my pre-paid Internet card, this one is going to have to be quick. I’m just going to have to bust out a short but sweet recap that highlights the day’s favorite happenings.

I could write about how our rockin’ tour guide Ruti told us about about Claire Epstein. You probably remember her from your ancient history ruins class in college. She’s the one that found the identical match to a pair of lions that guarded the city of Hazel while she was “easing” herself in a bush near the excavation site. Shaloms all around for Claire!

Or I could tell you about how we went to Caesarea Phillipi, which is believed to be the site of the Transfiguration. I could show you the picture of me in front of the gates of hell. 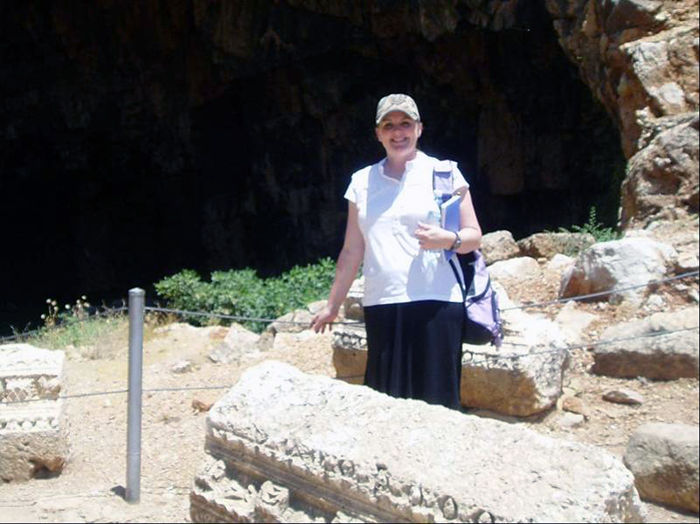 Must be why it was so hot there.

However, for time’s sake…and because NJO needs to write her own blog tonight (http://shalomshalomyall.blogspot.com. She’s added music AND video) I’m going to narrow the field down to my favorite moment of the day.

I THINK I WAS JUST ASKED TO SOME JEWISH KID’S BAR MITZVAH
After a day of baking in the sun, sweating olive oil and general Holy Land fun, a bunch of the gang wanted to go swimming in the Sea of Galilee. One small problem. Even though our hotel abuts the Sea, there is no beach, per se, in which to frolic. There is a boardwalk that is right up against a big wall of rocks that pretty much drops into the water.

Ruti explained to the group that you have to walk down about 10 minutes away from the hotel and enter the beach from a public gate. We had only one hour before we had to be back for our debriefing as a group. Nancy Jane and I didn’t want to swim, but we were interested in trying to find a boat or a person with a pole so we could go fishing in the Galilee. How cool is that? Just like John the disciple?

We plotted our strategy from the balcony of our hotel, which overlooks the boardwalk. We saw a family fishing on the wall of rocks and decided to go down, introduce ourselves with our best SHALOM and see what happened.

We did not expect the boardwalk to end with a chain link fence and a sign that read, “Trespassers will be sent to Nazareth Village” in Hebrew. The family was RIGHT THERE on the other side. Much like the pubic hairs on the ceiling of our first hotel, we wondered, “How did they get there?”

Nancy Jane, in her best southern drawl, introduces herself to the Mom that happened to be on our side of the fence.

NJO: “Shalom! HOW DO WE GET OVER THERE?”

The Mom looks confused. With a little bit of sign language mixed in with a good helping of charades, she finally figures out that we want on the other side of the barrier.

Lincee: “HOW DID THEY (points to family) GET OVER (makes hand gesture like rainbow) THE FENCE? (touches fence.)

Nancy Jane gives a big THANK YOU head nod, we give each other the look as if to say, “I’m game if you are!” and we follow. She climbs a small fence and whips around a pole, gingerly landing on the other side.

Picture it:
Small fence is indeed small. What’s on the other side of this fence is a 5o foot drop onto several jagged rocks.

Pole can clearly be whipped around. What’s surrounding the pole is barbed wire and another 50 foot drop onto several jagged rocks.

NJO goes first and makes it! I follow and make it too!

We are now clearly with the true Hebrew riff raff in the city of Tiberius. We’ve got the smoker’s cough Mom’s family fishing. Some high school girls in revealing bikinis sunbathing. And one questionable Arab on a wave runner trying to get Nancy Jane to “take a ride with him” tonight. She graciously declines with a simple, “I’m fine. Thank you!”

We make our way to the end of the wall of rocks and start to careen down in order to truly dip a toe in the Galilee. About halfway down I hear Nancy Jane talking very slowly to someone. I look up and there is a young Jewish kid speaking Hebrew to her. They seem to understand each other perfectly, which does not surprise me a bit.

Afraid that he would push her off the rock wall to her death, I make my way back up to the crowd, which has now grown to six Jewish boys. The oldest one knew the best English and would translate for the others. One boy knew NO ENGLISH and would ask enthusiastic questions to your face. You’d answer, “I don’t know what you are saying!” and he would shout back with glee, “SHALOM!” 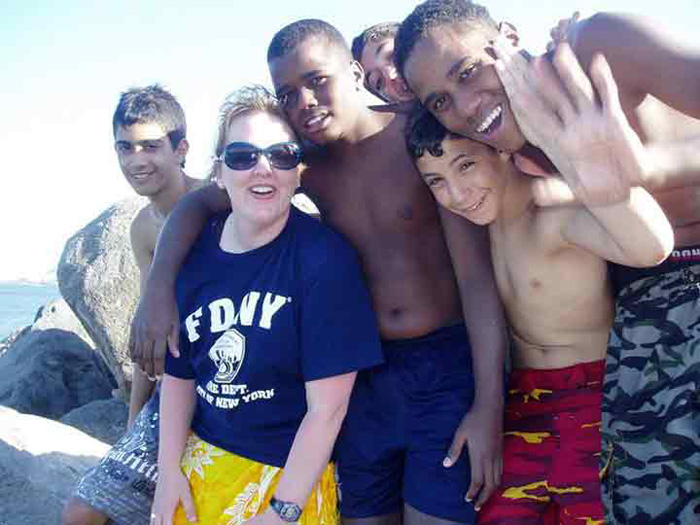 Here I am with our new friends. The one to my left , copping a feel, said I was beautiful and I’m pretty sure I agreed to marry him when he becomes of age. One would ask me to say things in Jewish and they would all start laughing hysterically. No telling what that was about, but I am going to go ahead and bet it was dirty.

It’s getting pretty awkward at this point. It’s not at all suspicious when all six kids have an “uncle” in the States. We try several times to tell them we are going to the Galilee to dip our toe, but they insist on escorting us down the dangerous rocks. They also are persistent to know where we are staying and if they can take our picture.

This ain’t our first rodeo Jewish kids. We are a part of the riff raff now. We scaled the wall and became one of you. Don’t even think about stealing my camera and selling it in one of your many gift shops on the Sea. I’m on to you.

We finally get them to go away by agreeing to take their picture as they jump off the rock wall into the Sea. As the last one yelled “mahzeltof” as he flung himself into near death, we made a break for the fence. Since we are pros, we whipped and climbed with ease.

Definitely the highlight of my stay here at the Sea of Galilee.

Lincee – I’m a long-time recap reader and feel like we’re BFF’s – or maybe you’re my BFF and I’m just a random blog fan. Love reading about your journey to the Holy Land. What an incredible opportunity you have – thanks for sharing it with us! Be safe and soak it all in!
–Mandy

Shalom, Lincee! Like Mandy, I too have been a longtime reader, and have always enjoyed your postings. You’re the reason I still watch The Bachelor! My parents just returned from Israel last week from a trip they took with our church. They actually did a 2-week stint through St. George’s College there in Jerusalem. I so wish I could have been there with them. They too did not have such a fabulous time in Nazareth, but the rest of the trip really transformed them. My mom brought me back a gorgeous Jerusalem cross, and my husband a (what else?) olive wood cross. I just finished reading Anne Rice’s “Christ the Lord: Road to Cana”, which talks about Jesus’ baptism, and your tale about being re-baptized in the Jordan brought tears to my eyes. I cannot wait for the day when I can go on this trip as well! Have fun, be safe, and may the peace of the Lord be always with you.

Thank you for sharing your adventures with us here at home!

I feel slightly inappropriate bring up Bachelor things at this moment but I think you should be advised that while you are away, VH1 is running some sort of vintage Bachelor marathon and showed the very first season ever yesterday. Nostalgia at it’s finest. I was reminded how unattractive Alex really was, how Trista’s baby talk really was that bad, and that the Bachelorettes used to leave video messages!! (why on earth did they EVER do away with those?!) Most of all, I was reminded at how much better (real) it was back in the day. good times!

Lincee, it’s been fun to read about your trip. I got to go when I was 17 and I’m reliving it with every one of your posts. You would definitely love Anne Rice’s Christ the Lord books now that you’ve been over there. They’re amazing. Also, I think the Dwight on your trip was my pastor in college. Loved him! Have a great rest of your trip!