Brian vs. Brad – A hotter than crap internal debate

Last weekend, I attended the American Red Cross Bachelor Blood Drive in Dallas. I was happy to participate as a fan of the show and believe that donating my blood is a small price to pay to possibly save a life.

But I have to admit that the best part of the day was meeting former bachelor Brian Westendorf of DDAHnna’s season. 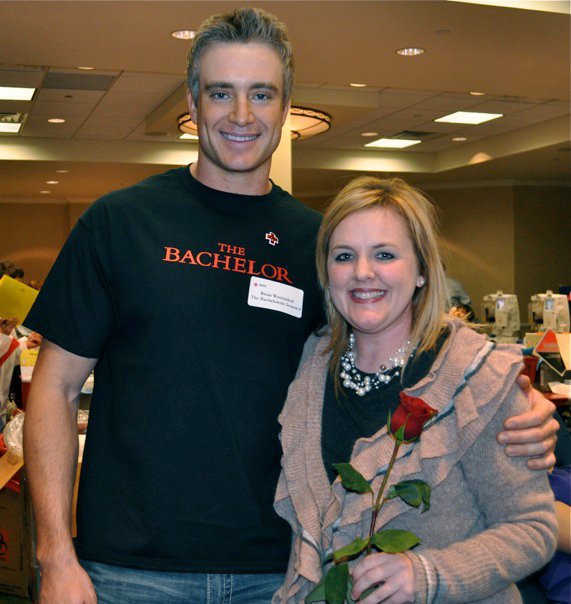 Just like the last time I donated, I was encouraging my seat mate across the way (who had never given blood before) when a handsome stranger approaches from behind a security curtain and offers me a rose.

Would you say no to this guy? Of course not. He was kind enough to entertain me and my friend the entire time I was laying there and then for another 15 minutes where they forced me to drink a bottle of water and eat a cookie. The entire Red Cross team praised him for his hard work and dedication and were extremely impressed that he chose to stay the entire blood drive.

I also learned that Brian is a fellow writer and has a blog on his website. Now that he and I are total best friends and kindred spirits in the blog world, I feel it is my duty to pimp him out. Please visit www.brianwestendorf.com and tell him I sent you.

In the 30 minutes I spoke to him in person, it was evident that he’s a great guy with a big heart. He even gave me a Bachelor t-shirt with signatures from all of the current season, as well as the former cast members participating in the blood drive.

My new friend Alison from the American Red Cross gave me a pink Bachelor tote signed by none other than Hotter Than Crap Brad. I’d like to give it away to one of the many IHGB readers by holding a little contest.

I’d like you to come up with a limerick, explaining the meaning of the word that sits above the ginormous back tat on our beloved Bachelor. It’s simple! Just write your creative poem in the comment section and the winner (chosen by a panel of close friends and family members of mine that have no idea they are doing this yet) will select the one that makes us laugh out loud. Here’s a screen capture from Monday night’s show to give you some inspiration. 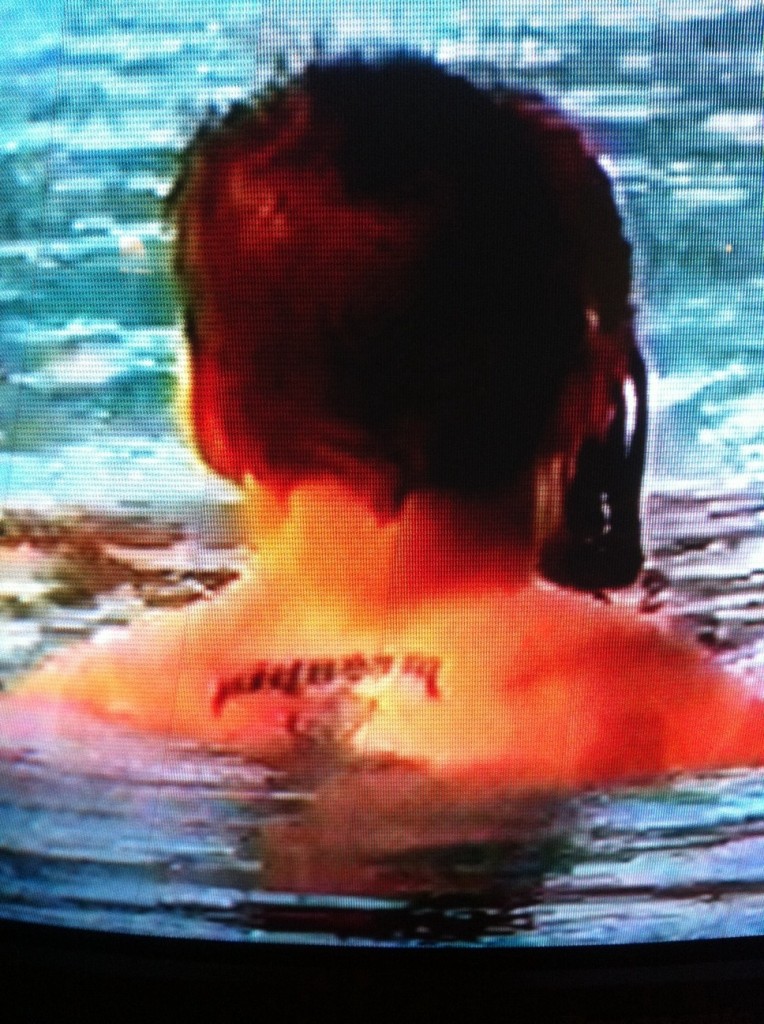 The winner will get the tote and an IHGB magnet (score!). I’ll announce on Tuesday at the beginning of the recap. GOOD LUCK and have fun! 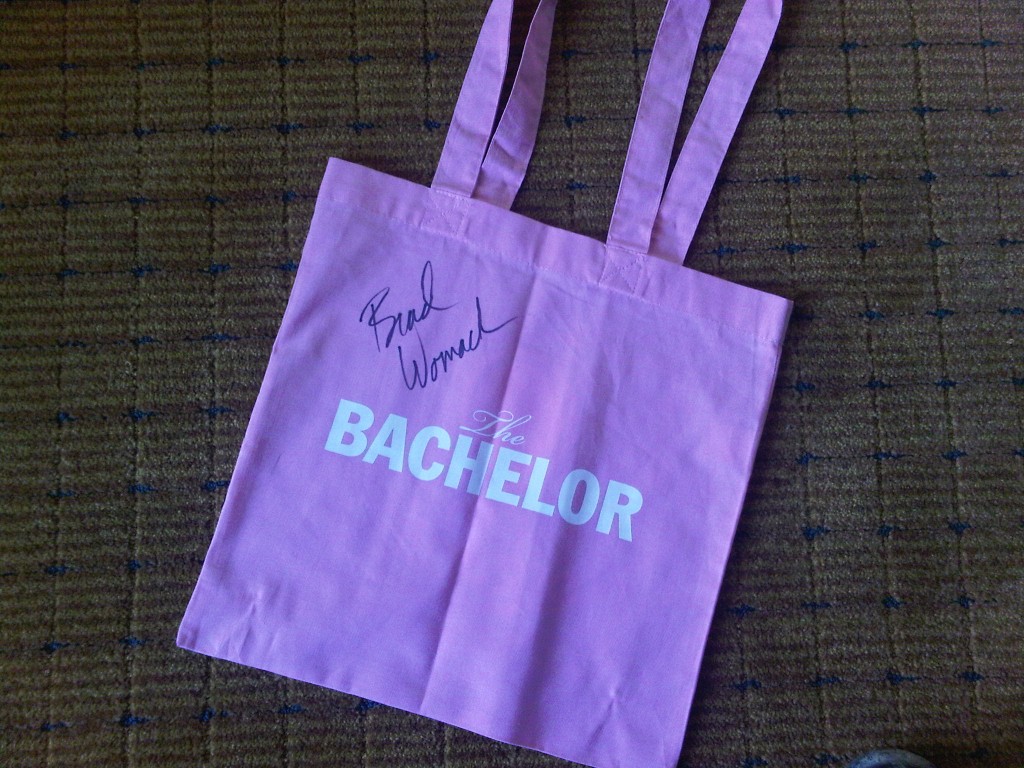 Great shot of you and Brian! Does he have a girlfriend?? Hint Hint!!

You were looking stylin’ yourself. Not bad for a day of giving blood! Have a great weekend!

I don;t even know how to begin writing a poem so I am out of the contest, but what a great bag!

PS: I think Brian is cuter than Brad, but I like a guy with grey hair that still can strut his stuff. Also, you shoudl have had a Dr. Pepper with you! This wouls have made a great picture for your collection!

Loved that you felt it necessary to explain the carpet….you are too funny.

Yay for you. I vote Brian is cuter than Brad.

well…prosapia stands for family. the cross i would assume stands for faith. so therefore i have no idea why he has this on his person since we (which includes his therapist) have absolutely no faith that he will ever have a family!

So family is what you profess
But, dude, I have to confess
Tho your abs are so smokin’
You have got to be jokin’
If you pick Michelle above all the rest.

I don’t know if I can enter more than one, but here’s another!

There once was a man with a tat
Many said he was hotter than crap
But, dude, I don’t know
If I can keep watching the show
Unless Michelle gets out of his lap.

There once was a man named Womack
With a mammoth tattoo on his back
Whatever it means,
Women who hate green beans
All agree he’s a boring, bland hack!

There once was a bachelor named Womack
Personality and brains he did lack
“A cross would seem manly! What’s Latin for family?
Come here to me, and tattoo it on my back!”

I found some better pics of the tat here : http://benwilder.wordpress.com/2011/01/04/the-bachelor-brad-womack-the-tattoo/

now I have to get the creative juices going

“come here to me”
i say a lot
these girls just met me
and think i’m hot
if no one at the end i choose
my testicles i’m sure to lose
don’t hate me ’cause i’m beautiful
but rather because of sh*t i’m full!

sorry for the wordy durd, but i mean it’s true, right? 🙂 hope i win that amazing tote! my girl group of fellow monday night watchers would absolutely flip!

Brian wayyyyyyyyyyyyyyyy hotter than HTC and seems like a great human being too!
Womack’s autograph as simple and bland as him, really!

Any chance of a romantic hook up Lincee (and you’re looking wayyyyyyyyyyyyyyyy too adorable in that pic btw) since you’re BBFFs and all (blogging best friends forever der)
did he get your digits?? lol

I’m for real.
Are you real?
Or maybe a few parts?
I’ve dated and broke some hearts.
I’ve gone over some walls.
Not to be confused with big balls.
In the end our heart will fall.

I had to mention wipeout!!

Number one, cut it out with that cute necklace. Number two, get a room you two. 🙂

Ok, one more, just for fun

A bachelor with a bad rap
Whose bod made him hotter than crap
Got a giant tattoo
Meaning family, who knew?
Turns out he’s a therapized sap!