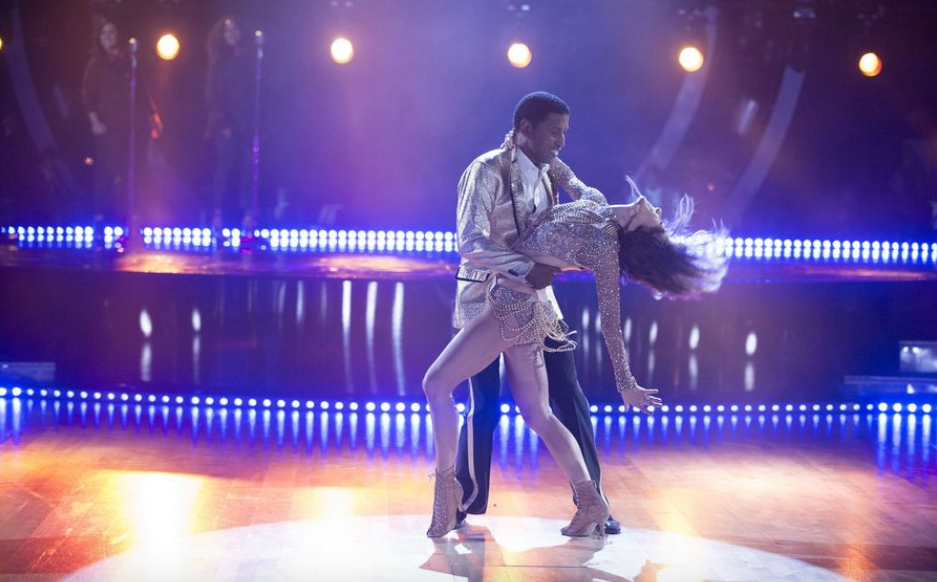 With the presidential debate scheduled for the next hour, Dancing with the Stars show runners had to pack an incredible amount of activity in only 60 minutes. No one has time for Erin Andrews to peel back layers in the Glitterdome. No one has time for the JV dancers, unless they are wearing Hilary Clinton and Donald Trump masks. We are LIVE, people. You’re announced, you dance and you GET OFF THE STAGE.

It’s the face-off round. The odds must be in your favor to win immunity. Carrie Ann is watching for lifts, Julianne is watching for emotion, Bruno wants to see skin and Len continues to live in his crotchety world. Let’s do this.

Babyface and Allison kick us off dancing a subdued version of the jive to “Great Gosh A’Mighty” by Little Richard. Allison notes in their interview package that Babyface has trouble letting loose. She is right. He seems very stiff with a plastered on smile. And I didn’t really understand their theme. Or perhaps I wasn’t paying attention because I was too busy waiting for Allison’s barely there outfit to fall right off of her body. This woman, who has birthed two children and is channeling her inner Edyta as if she’s performing in a burlesque show. I half expected a drag queen dressed like Cher to waltz onto the floor. On top of that distraction, their jive wasn’t very jivey.

Jana and Gleb tackle the jive the best they can. There is a lot of fast foot work to the tune of “Too Many Fish in the Sea” by Bette Midler. Jana worries that she won’t physically be able to move her foot that face. Low and behold, she couldn’t. Everything is clunky. Her “oh” face is a bit unfortunate. So are Gleb’s pink socks paired with man-sized Keds. They looked like ballroom Barbie and Ken in their pink polka-dots. They barely eeked out a win.

Emma choreographs a paso doble routine to traditional Latin music. Rick twists his ankle in practice. He continues to dance through the pain for the troops. The show must go on. He may have a great bromance going on with the Ice, but for two minutes, they are enemies. I have to admit that Rick looks really confident in his matador outfit. Emma is striking in her frills and fluffy black and white costume. Rick executes a few jumping jacks in the middle of the floor as Emma twirls around him. It was a sight to behold.

Vanilla Rob wears a rhinestone jacket and ball cap with his matador outfit. Witney chooses her best Halloween lingerie. It matches the moody version of “Save Tonight” by Zade Wolf. Vanilla’s guy liner is fierce. Their dance seemed very short. Also, the camera man stayed waist up. I assume their feet were off on more than one occasion because of their low score, which was a tie with Rick and Emma. Len had to break the tie.

James continues to impress me. I also love Sharna. Her choreography is legit. James cha-cha’s all over the floor in perfect synchronization to “Big Trouble” by Outasight. Bless his gyrating hips, though. When he was pressed up against Sharna, she calmed the spaz down. When he had to shake his booty by himself, I hit the couch cushion. It was a scooch dorky, but I’ll forgive him because he’s so darn cute.

Ryan, on the other hand, is still a bit of a hot mess. In the opening sequence of “If It Ain’t Love” by Jason Derulo, Cheryl and Ryan are in black silhouette against a red backdrop. Cheryl grabs Ryan’s leg from a squatting position like she loves to do. Then she rips open his shirt. This totally would have been awe-inspiring if we hadn’t seen Ryan topless for three weeks in a row during the Olympics. The pair cha-cha-cha (sort of) all around the elevated stage and I notice a small child on the edge clapping and looking terrified at the same time. She was probably wondering how Cheryl could wear that body suit in public without passing out of embarrassment. I get it.

Sasha tells Terra that they will be dancing to “Iris” by the Goo Goo Dolls. He is excited because the lyrics are Terra’s story: “I don’t want the world to see me. Cause they don’t think that they’d understand. When everything’s meant to be broken, I just want you to know who I am.” Terra digs into the vulnerability of the words. Once again, I’m amazed how Sasha can stand tall but connect with Terra on her level at the same time. I thought the choreography was very simple. That might have been what burned them in the competition.

Lindsay’s advice to Calvin as they dance to “Woman’s World” by BJ the Chicago Kid: Don’t squeeze the brains out of my head. Noted. Calvin needs to learn how to be graceful. Although they ran out of room once or twice, Lindsay did a solid job incorporating waltz moves all across the floor. She did the split and drag move from corner to corner. It was delicate and pretty. Calvin is the man.

Producers give Amber the song “Booty” by Jennifer Lopez. Naturally Maks focuses his choreography on that particular asset. Once I saw her glitter tights, denim panties, fake wig and graffiti wall with BOOTY painted across it, I knew Len would hate this nonsense. There was twerking, selfies and very little salsa. To quote the brilliant Tom Bergeron, “Amber looked like a Real Housewife of Hazzard County.” Amen, brother. Amen.

Naturally, Maureen and Artem get a normal salsa song that is in the Latin family. She’s in a traditional fluffy outfit, complete with a fake flower in her hair. He’s shirtless in white pants. It looked like they were the floor show on the lido deck for a Royal Caribbean cruise. Luckily, tradition beats booty.

Laurie and Val dance to “Into the Sunset” by Crystal Lake. The wardrobe department warns Laurie that she will be wearing lingerie. She has to tap into her sexy side, which is hard for a 16-year-old girl who still sleeps with a teddy bear. Val makes her cry when he says that she can’t be cute Laurie anymore. He barks, “It takes two to what?” and she answers, “To make a thing go right?” No, sweet, young, tiny baby Olympian. It takes two to tango. And boy can she tango. Val excels at the Latin dances and he molds Laurie into a tango machine. She is technically perfect. Too bad they had a lift.

Marilu thinks she can beat Laurie by using the one thing that she brings to the table — EXPERIENCE. She is mature. She is also very bendy for a 60+ woman. She’s intense and looks phenomenal in her dress. I believe she missed some choreography. Or maybe her head jerks were off? I can’t be sure, but what I do know is that the dance was S-L-O-W.

What did you think of the face-off? Did the right people win immunity? Was Ryan’s bare torso ho-hum in your opinion? Who will go home tonight in the two hour elimination show? And why is it TWO HOURS?!?!

Ryan’s torso is never ho-hum. Despite everything that happened in Brazil, I still think he’s a lovable oaf-especially after the outtakes of his and Cheryl’s rehearsal. Regardless, Sharna and James and Val and Laurie are still my favorites!

I thought Vanilla did way better than he was scored…and boy, was Witney pissed when judges gave them low scores. Girl needs to hide that kinda attitude and just roll with it.

Babyface, Calvin, and James are big surprises to me. They can dance. Marilu is impressive too. But I believe it’s Laurie’s mirrorball trophy in the end. Ryan did pretty good but I cringe when he talks – he’s not too bright – but he seems like a kind person.

I liked Marilou more than the judges did. We were there last night.

Thank you for the recaps, Lincee! My favorite line was “No, sweet, young, tiny, baby Olympian”! Ha ha She is pretty amazing, but I really like James too. And as a big football fan, I always am very intrigued by the football players. Megatron was on my fantasy team in the past and he has surprised me with his charm. But, I didn’t find him as good last night as the judges. He didn’t seem elegant to me whereas Terra did. But what do I know! What did you think of the dance with Val and Maxim on Tuesday night? They can certainly entertain a crowd!

Hmmm…..isn’t Marilu one of those folks that remembers everything since birth? So she should have the dances down on the first try. Me thinkest something is rotten in the state of Denmark. AND (I know I should not start a sentence with ‘and’…but I did) Artem should know not to wear white pants after Labor Day. What? Too old school? 🙂

I thought the music choices this week were a bit . . . off. Didn’t seem to go with the dance styles this time around. Just a bit clunky! But I am really, REALLY looking forward to seeing what they do next week with the Cirque du Soleil folks!! Should be fascinating to watch.

Inquiring minds would love to know! 🙂

Furreal though, I always anticipate your DWTS recaps, so I’m looking forward to your return and hope all is well!

I hope everything is ok! It’s not like Lincee to be missing!