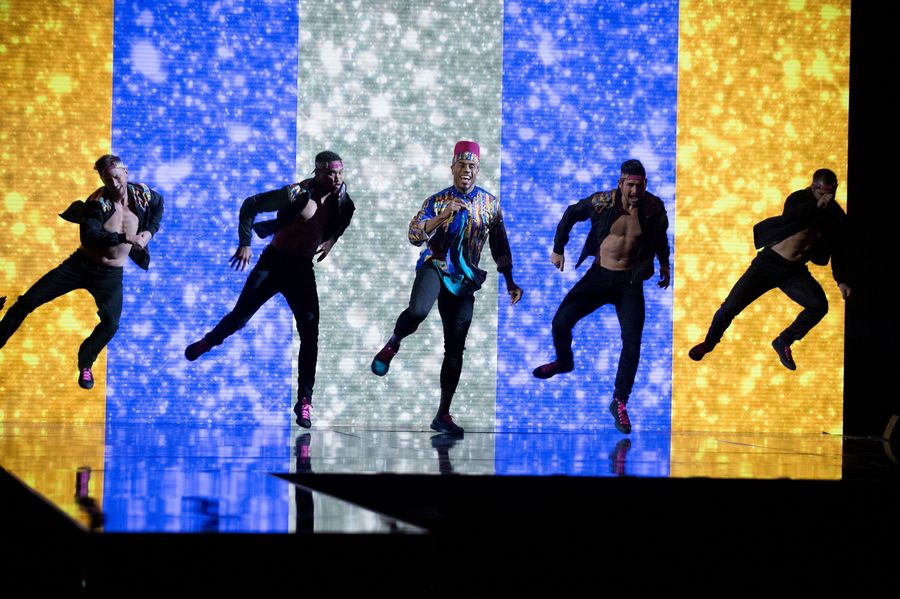 Only three remain: one good dancer, one okay dancer, and one baseball player. There’s no time to waste this episode, because we have the redemption round coming up. Plus, a lot of people are super excited about the premiere of The Bachelorette, so let’s get this show on the road!

David and Lindsay
Redemption Dance: Viennese Waltz
“Let’s Hurt Tonight” by OneRepublic
I was confused at first, because I thought that the teams had to dance the exact same dance again. I think those are old-school rules back when the show didn’t have so many production numbers or JV dancers. Apparently all David has to do is prove that he knows the Viennese waltz better than in week 4.

David just laughs. He continues to be stunned at the fact that he is still in the competition. He lets the viewing audience know, again, that he understands he is not the best dancer. But he’s doing this for the fans, and the fans seem to like him. SMART MOVE, DAVID.

He twirls Lindsay around in her dusty pink gown. He has a matching pink tuxedo. The dance was forgettable, but he is not. Cub Nation may put this guy straight through to the top.
Bruno’s Best Line: “You’re like a windmill in a hurricane!”
SCORE: 33

Normai and Val
Redemption Dance: Quickstep
“Check It Out” by Oh the Larceny
Val has to harken back to week 1 when he and Normani performed a quickstep in order to find something with which she could improve upon. She dresses in a bejeweled, black onesie that is made of both fringe and lace. As they skip all over every inch of that ballroom, I was once again reminded that Normani is a force. And since this is the finals, the judges can’t very well give her a perfect score, again. So they take off points for “lack of body contact.” Apparently her catsuit didn’t do her any favors in the judging department.
Bruno’s Best Line: “Smoking! That was brilliant!”
SCORE: 38

Rashad and Emma
Redemption Dance: Viennese Waltz
“Dark Times” by Ed Sheeran
Can you believe that Rashad has never won anything in his entire life? That’s why he works so hard. He doesn’t want things handed to him, including a mirrorball trophy. He puts his heart and soul into his Viennese waltz. I didn’t love it, but I think it was because I wasn’t feeling the dark theming and music. Emma can choreograph the crap out of a dance, but if felt a smidge bored. But what do I know? Everyone else was blown away.
Bruno’s Best Line: “Your footwork is unrecognizable!”
SCORE: 40

David and Lindsay
“It Takes Two” by Rob Base and DJ E-Z Rock
I’m going to say this freestyle lives in the vein of jazz, even though it is really a script from musical theater camp. There’s a dugout, bats, balls, railings, confetti bomb at the end, and oh look! There’s Lindsay in rhinestone panties. Every JV dancer shows up for this number, making sure to give all the background energy in the world so David can shine in his uniform. His sequins help with that, too. There was a hip hop bit in the middle that I choose to forget, but other than that, David committed to the moment. And his scores reflected his determination.
Bruno’s Best Line: “Peanuts, balls, bats, and glitter!”
SCORE: 40

Norman and Val
“What the World Needs Now Is Love” by Andra Day
I understand why Val wanted to pull at the emotional heartstrings of the judges. Normani’s competition is going big, so he’s going to do the opposite. I’m not sure where the two little kids fit into that plan, but Normani passionately performs a lovely routine full of lifts, tricks, spins, facial expressions, breaths, and glow sticks, courtesy of the audience members. Normani interrupts Tom before he goes to the judges, thanking them all for the opportunity to dance. She’s a better person coming out that she was going in. Val fake cries and everyone cheers. Could Normani be giving her concession speech a day early? Do you think she believes she won’t win?
Bruno’s Best Line: “It was purity in style and form. Divine.”
SCORE: 40

Rashad and Emma
“Uptown Funk” by Bruno Mars
Look, I appreciate that Rashad teaches the JV kids how to military freestyle to a drum beat, but I’m not sure that was the smartest trick out of the bag. Emma’s ‘80s-inspired jazzercise costume? Absolutely.

The number seemed rushed, clunky, unpolished, and all over the map. I thought David had all the JV dancers, but Emma took to the streets to find more. Emma stuffed it all into this dance, leaving nothing (or should I say everything?) on the floor. Since the judges gave David a perfect score, Rashad had to get one too. With that said, you can’t stop the dance when “Uptown Funk” is playing. You just can’t.
Bruno’s Best Line: “Uptown, downtown, across America — no one will forget this one!”
SCORE: 40

Tonight is the Dancing with the Stars finale! Who do you think will win? Vote now!

I think you’re being too hard on Rashad. So have the judges all season, all in the name of clearly playing favorites with Normani (her salsa wasn’t even a salsa and she still got 3 10s). But to each their own, I guess. Frankly, I stopped caring who would win the second Heather got eliminated.

I agree that you’re being too hard on Rashad. For someone who has NEVER danced, I think he’s amazing. He has a light shining about him. He and Emma are pure gold together.

I still, to this day, don’t understand all of the hoopla surrounding Rashad. He’s a good dancer but I don’t think he deserved two perfect scores last night, especially in his first dance. It did nothing for me but I guess I wasn’t expecting much going into it. I’ll be very disappointed if he wins tonight and he shouldn’t win just because he’s never won anything before.

Normani is a fabulous dancer and I think the judges were exceptionally hard on her first dance last night. The fact that Julianne gave her and David the same score is laughable. I knew it was coming but I was still stunned. Her freestyle was breathtaking but I was left wanting more especially for freestyle. It didn’t have to be crazy all over the place but I guess I was underwhelmed.

David. Oh, David. I don’t really know what to say about him except that he is the everyman and anyman in this competition. Does he deserve to win? No but, as I said last week, I would love, love, love to see him take home the Mirrorball!!!

I’m wholeheartedly in favor of the hoopla surrounding Rashad!! I love that he’s been into it the whole time and has given it his all. I love that he is *not* a pro dancer or someone with a lot of prior dance training. I also love Emma and would be happy for her to win. Normani is beautiful, likable, and a terrific dancer. But she’s also had a fair amount of prior dance and performance experience and training, and we’ve seen over the years that at a certain point, the voters don’t love that. So to me, Rashad is the one that is the best combination of a good dancer, a likable person and NOT someone with prior dance training. I love David, and have enjoyed watching him, but I voted for Rashad over him on dance ability. It wouldn’t surprise me however if David ended up winning the whole thing based on his popular appeal and support from Cubs Nation and MLB in general. As for the scores, my recollection is that in finals week, the judges tend to keep it as close in the scoring as possible and you see a lot of 10’s thrown around, so that they can’t be accused of heavily influencing the outcome.

In spite of my love of Rashad, letting him come up with parts of his freestyle was a bad idea, it was a lot of fun but it was kind of a hot mess of this and that. Normani’s freestyle was beautiful, but I didn’t understand the kids being there, and Val always choreographs something like that for the freestyle. David and Lindsay’s however was tons of fun! Simple, but really fun.

It’s #TeamShadSquad for me! But I would be happy for any of the three finalists to win, and I would have been happy for Simone as well.

I could sign your post with my name. I agree with all you shared…and now that it’s Wednesday morning, I am so happy Rashad won!!

Me too!! He deserved to win as I believe he improved the most and worked the hardest. I have always disagreed with having pros or those close to it as part of this competition. Glad that it seemed to work against those types this season frankly!

I think Normani will win, I want Rashad to win. David’s freestyle had me smiling ear to ear but I have been team Rashad all season. Normani danced beautifully. And although she could pull off the catsuit, it was not my favorite.

I love that Rashad did his own choreography.. I hope he wins but like the others ; eliminating Heather so early kind of took the wind out of my sails.

I hope in the future they won’t invite professional dancers on the show .

Of course if you invite an Ex-Baseball Player it’s not his fault if he does well so judges stop telling him he’s not the best dancer…..HE KNOWS ALREADY