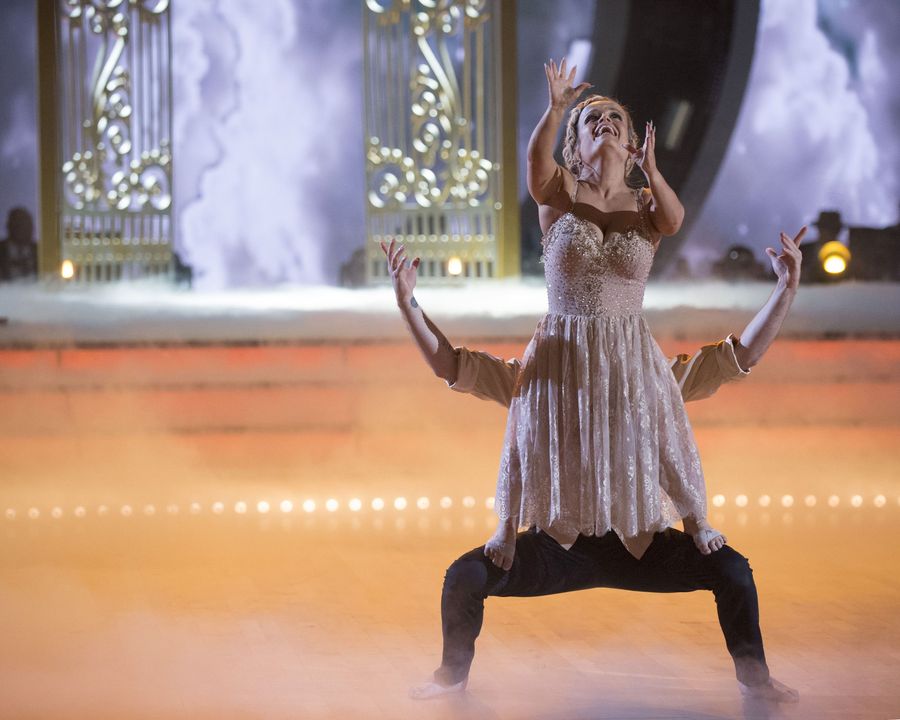 Dancing with the Stars recap: Most Memorable Year

One week at Disney World followed by one massive viral infection can’t keep me down this week. No way. Sure I’m typing this with a Kleenex shoved up my right nostril (for the love of Tom Bergeron, PLEASE STOP DRIPPING) and my voice sounds like I should be moonlighting for a 1-900 call service, but nothing could keep me away from the cry fest that is known as Most Memorable Year on Dancing with the Stars.

How could I stay away from that opening number? Especially when conductor Andre Rieu makes his entire orchestra dress in brightly colored antebellum outfits, flanked by an all-female choir in equally puffy and florescent wardrobes. It was magnificent. And that’s not because they played a string version of  the Titanic theme song. Well, maybe that was 50-percent of it. Our pros looked so fancy in their spotlight dances. The men wore tails. The girls were in pink. Julianne’s top knot was special. I’LL NEVER LET GO, JACK!

Let’s see which years denote crowning career advancements or personal heartbreak, shall we?

Maureen and Artem
Foxtrot
“From the Ground Up” by Dan + Shay
Maureen chose 1985 as her memorable year. She was married to her husband who saved her from a life of parties and a cocaine addiction. Peter Brady came out of the woodwork to tell us that Marcia would have hit rock bottom if she hadn’t met Michael. Artem taps into this emotion and choreographs a dance where Maureen is a bride. There’s lots of skirt flourishing and Maureen still has a bad habit of licking her lips and swallowing hard. But it was flowy and beautiful and lovely. There were even rose petals at the end. SHOUT OUT TO THE CLEAN UP CREW!
SCORE: 24

Calvin and Lindsay
Jazz
“Ain’t No Mountain High Enough” by Marvin Gaye and Tammi Terrell
2012 is the year Calvin broke Jerry Rice’s receiving record. It’s also the year Lindsay graduated high school. I hate her and her long, luxurious legs. The dance had a wonderful Motown meets the Grease bleacher routine, complete with JV dancers. Calvin was head-to-toe royal blue with lots of sparkles. He picked Lindsay up no less than five times and spun her around like she was weightless. At the end of the piece, Jerry Rice spirals a football in Calvin’s general direction. Clearly, this was a surprise to Calvin. He was simply DELIGHTED that his role model cheated out his own father (who was originally supposed to throw the ball) during that glory moment on national TV. Calvin is a natural dancer. I have no clue why they scored so low.
SCORE: 24

Gleb and Jana
Contemporary
“In My Daughter’s Eyes” by Martina McBride
Jana’s baby girl was born in 2016. It’s easily her most memorable year. What I didn’t know is that she was in an abusive relationship and her ex went to jail for attempted murder. She dedicates the performance to sweet Jolie (who is about the cutest thing E-V-E-R) and floats around the ballroom in a light blue whimsical outfit. She executes a forward trust fall that was so, so good. There was also a lift where Jana skirt swept around Gleb’s head. Thank goodness it was made of gossamer. Otherwise, I’m not sure how he would have maneuvered her back down to the ground. The audience loved the routine and Jana shuffles over to her baby girl, has a quick Simba moment where she presents her to the crowd and proceeds to land one of the highest score of the night.
SCORE: 26

Cheryl and Ryan
Contemporary
“A Song For You” by Leon Russell
Ryan is all about 2008, when he won his first individual Olympic gold medal. He cries a lot during his opening package. Life as an Olympian is hard and lonely. Thank goodness he has a new finance to share his days with now. Cheryl choreographs to the words instead of the music, which is extremely hard to do, especially for an untrained dancer. I’m not sure that was the wisest of moves, but Ryan hung in there. There was lots of crouching on the ground and angsty faces. Cheryl executed a weird back bend move that proves the woman doesn’t have any bones in her spine. They also dropped glitter from the sky. DON’T LOOK UP!
SCORE: 24

Laurie and Val
Paso Doble
“Rise” by Katy Perry
Laurie’s memorable year is a no brainer: 2016 Rio Olympics, baby! Since they received a perfect score last week, Val pushes her to be even better. Producers pinch her so she’ll cry and pretend to be emotionally stunted by the aggressive choreography. Or the sweet baby girl is just tired. She has a hard time dancing in heels, but her leotard is banging! I was nervous for a hot second when Val whipped a shirt around her waist, assuming it would fall off any minute. It didn’t. So I rewound and watched again without the heart palpitations and I liked it! Very glittery. Very intense. Very low score for some reason.
SCORE: 25

Marilu and Derek
Viennese Waltz
“Surprise Yourself” by Jack Garrett
In 1978, Marilu’s mother died, and she landed her iconic role on Taxi. She admits that she’s afraid of Derek because she doesn’t want to disappoint him. He decides to choreograph a waltz that plays her up and tones himself down. Hallelujah! There was a lot of smoke. A lot of cleavage and a ton of rhinestones. Even though I wasn’t supposed to be watching Derek, I found myself wondering why his pants had pockets. Random, I know.
SCORE: 27

Maks and Amber
Samba
“Woman Up” by Meghan Trainor
Amber remembers 2013 as the year her son was born. She wants to dedicate her routine to women and moms everywhere. Hooray! She proceeds to melt down during camera blocking. Make tells her to suck it up because there’s no crying in samba. Her colorful glittery bodysuit with puffy butt adornment was incredible. Her dance was not.
SCORE: 24

Sharna and James
Tango
“The Right Time” by Yves V featuring Mike James (I Googled this.)
James had the biggest crash of his career in 2015. The surgeon said that he should have made it. Something poked him from the back of his leg all the way through his body out of his back. His blood was replaced three times. There was no pulse going into the operating room. Yet here he is 18 months later in a snappy golden outfit dancing a tango to techno music. He’s technically proficient and extremely adorable. I heart James.
SCORE: 29

Sasha and Terra
Contemporary
“Stand By Me” by Florence + The Machine
In 2013, Terra’s father passed away. She wasn’t there and hasn’t forgiven herself. Sasha choreographs a routine as if he is her dad and they have one last dance together. I didn’t like that her outfit was so revealing, since she was metaphorically supposed to be dancing with her father, but I got over it when home girl stood on Sasha’s thighs and balanced without him holding onto her. Then she flings into his arms and is twirled around 9,000 times without puking. That’s fierce.
SCORE: 27

What did you think of Most Memorable Year week? Did Laurie deserve such a low score? Is James the one to beat? Are you afraid of Derek too? Who will get kicked off next week? Sound off in the comments section!

I wish I felt more of a connection to the dancers this season, but honestly I don’t. 🙁 Typically I’m a crying mess during the most memorable year but I was like meh this time around.

The best line from last night was when Ryan’s mom said, with a hidden smile, that they originally got Ryan into swimming “to keep him out of trouble.”

And yes – what is with the judges scoring Calvin so low?? He’s so graceful and nailed the dance last night, and ended up with such a low score.

Welcome back, Lincee, you had us worried!

I love, love, love Calvin. He is so darn charming and entertaining. James is great – what is with race car drivers that they are good dancers? (Can we get Ari on DWTS?) And Laurie is fantastic. I’m not sure her scores were too low, but I don’t think this week’s dance was as well suited to her as last week’s, which was perfect for her.

I always dread MMY night…too many tears and too many “contemporary” pieces allowing the stars to rely on acting instead of real dancing. Calvin’s performance, however, was fun and technically jam-packed. Love him!

Calvin definitely deserved higher scores! I think he was hurt by going early in the lineup. Hopefully it made people vote for him, I would really be unhappy to see him be the one to leave next week. James is so great, I loved it that his doctor was so emotional about seeing him thrive, I’m sure he can still picture him basically flatlining. I agree that there are several very blah pairs this year, but honestly Calvin, James, Laurie and even Terra make up for that to me. But I do worry about how the voting is going to go and that people like Marilu and Amber will stay around because people will vote for their partners.

That trust fall scared me to death!!

Welcome back, Lincee! I love James and Sharna. They are Awesome! I too was impressed that Terra could be spun around so many times, so fast and not be completely dizzy after.

Great recap Lincee. I hope are feeling better. I like a lot of the pairs and really enjoyed the MMY night. I also like Calvin quite a bit but it always stands out to me that he doesn’t point his toes enough. Yet they never say anything about that. Does anyone else notice it?

He wears a size 15 shoe, so I’m not sure that’s even possible.

I’m also kind of “meh” about this season. So far, I like James best (being a fellow Canadian and all ;)). Plus, he’s good!
That trust fall was something I would NEVER do, so good on Jana! Wow – she was SOOO close to the ground thatI keep having flashbacks thinking how close she was! Shudder…
Glad you had fun in Disneyworld Lincee. Hope you feel better soon!