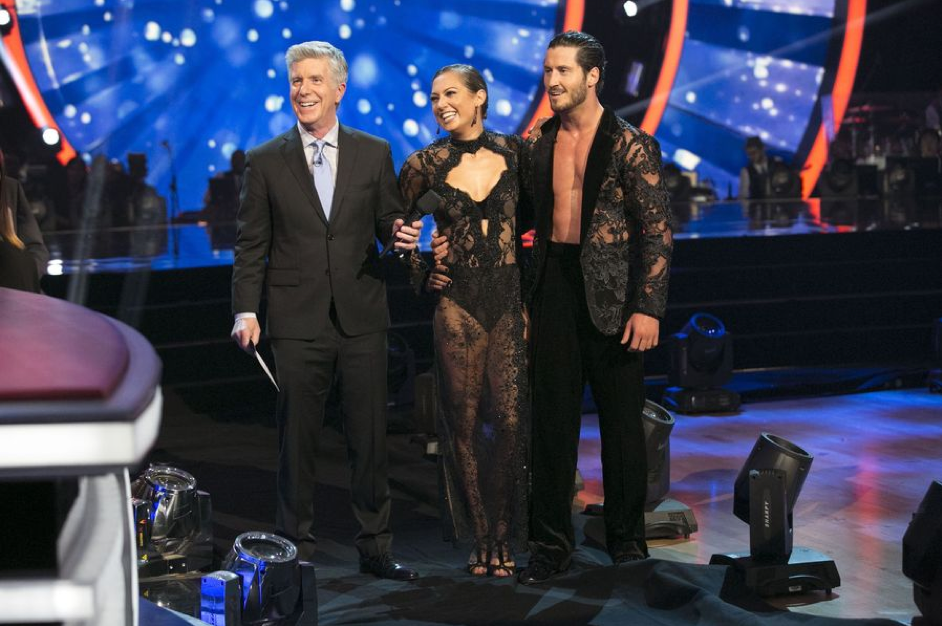 Dancing with the Stars Recap — Judges’ Team Up Challenge

I was initially nervous when I saw that Mandy Moore had choreographed the opening number around a ballroom floor full of vertical fluorescent light poles. Fortunately, our JV Dance Troupe may not be considered professional enough to be on the actual show as a partner dancer, but they are professional enough to be on the actual show’s payroll. Who cares that one might be impaled by a light saber? You can’t stop the dance, people. No matter how distracted you may be by Erin’s black, satin nightie. It’s show time!

Nyle and Peta
Paso Doble
“Victorious” by Panic! at the Disco
Peta feels the pressure of being in first place. Instead of freaking out, she decides to show the world what it’s like when Nyle dances. She gathers a trio of troupe dancers and choreographs three eight counts without music. For once, these dudes have to follow Nyle’s lead and everyone quickly realizes how hard it is to dance without music. My response? No duh. Nyle kicks a fence down at the beginning of the routine and he and Peta paso all over the place. Then she leaves the floor (wise) while the dudes dance in silence. As a TV-watching participant, we get the full effect when the production team cuts all audio. I felt the impact. They finish big and end in a cage. Len rambles on about Nyle’s weight not being over his feet. The other two judges cried.
SCORE: 29

Sharna and Antonio
Viennese Waltz
“Love on the Brain” by Rihanna
Step 1: Teach Antonio the difference between Viennese and Vietnamese. Step 2: Praise him for arriving at rehearsals early. Sharna choreographs a sweet waltz that flows and moves beautifully. Both of them look gorgeous in navy blue. His technique seems really good to me and I’m impressed when Sharna dips into a split as Antonio pulls her across the floor. I’m even FURTHER impressed when she repeats the step with the opposite leg. The judges must have seen mistakes that I didn’t, because his score didn’t reflect a solid dance.
SCORE: 27

Jodie and Keo
Jive
“Something’s Got a Hold on Me” by Etta James
Jodie and Keo’s pre-dance interview concentrates on how the world blames Keo for Jodie’s poor standing in the leader board. I hate to say it, but I’m part of that debate. Jodie does a great job of supporting her partner, but I still feel that Keo’s lack of personality or introvert tendencies is not helping him. Their jive is packed full of fun stuff, and really good. Keo actually looks like he is having fun! DJ Tanner cries in the audience as the scores are announced. I’m not sure they deserved a perfect score, but I’m also okay with it.
SCORE: 30

Paige and Mark
Viennese Waltz
“Stone Cold” by Demi Lovato
Mark is never going to play it safe and he will laugh in the face of anyone who asks him to. He takes a big risk bucking the traditional constant flow of the Viennese Waltz by peppering in some sharp, almost statue-like movements into the choreography. Their make-up and costumes were incredibly creative. I loved the dance and though the syncopation parts in the middle were brilliant. It reminded me of this piece from So You Think You Can Dance. I thought interrupting the continuous movement with sharp breaks was well done. I also thought their score was too low.
SCORE: 28

Ginger and Val
Argentine Tango
“Telephone” by Martynas Levickis
Val tries to teach Ginger how to look sexy without looking constipated. He also wants her to stop apologizing for not getting the steps right. He puts her in a lace dress that matches his lace blazer. Then they dry hump on the floor in front of America. And her husband. And her baby. At one point, she did look like she was breathing through pain. Maybe she was constipated? I don’t know, but it was hot and steamy. I loved it. Especially when Val ended with his head in her boobs.
SCORE: 30

Lindsay and Wanya
Jive
“Can You Do This” by Aloe Blacc
Wanya has lost 22 pounds since he started dancing with Lindsay. She’s ready to push him to the next level with some intricate cowboy-inspired jive choreography. Sadly, she packed everything in but the kitchen sink, and it sort of backfired on her. There was a saloon, background dancers wearing chaps, an actual tumbleweed and the infamous bandana. Wanya slipped on it, lost his footing and never really got back on track after that. To say it was a hot mess is being kind. Lindsay knew it. She took full responsibility and cried while Wanya consoled her.
SCORE: 25

Team Bruno
Nyle, Peta, Jodie and Keo
Argentine Tango
“Habanera” from Carmen
Bruno wants to push the boundaries of what’s been done on DWTS. That means boy on boy and girl on girl action. Nyle says that dancing with Keo isn’t any different than dancing with his original partner. Peta thinks this is hilarious because she’s not a tall man with bulging muscles. While the boys work out how to hold each other, Peta teaches Jodie how to be sexy. The boys get shirtless. The girls increase their hair size and reduce the amount of clothing they are wearing. Jodie and Nyle dance together at the end. Everyone is happy.
SCORE: 29

Team Len
Wanya, Lindsay, Ginger and Val
Samba
“Jump in the Line” by Harry Belafonte
Len wants to be in this number with his team. Therefore, they have to slow the music way, way down. Even though he only makes a cameo at the end, the entire number feels like the love child of the Tommy Bahama shirt section and a musical on a cruise ship. Way too many shimmies. Way too many open mouths. Way too many grass skirts. I love that Val ripped his shirt open, followed by Wanya who sported a tank top with spray painted ab muscles. It was too campy and very cheesy.
SCORE: 29

Team Carrie Ann
Paso Doble
Sharna, Antonio, Paige and Mark
“Everybody Wants to Rule the World” by Lorde
Since Carrie Ann is working with the two athletes, she packs in a ton of lifts. The group dance in baby powder and ground fog. It was weird and eerie and I liked it for some reason. I didn’t feel that it was very paso doble, but I liked that the theme was power. I didn’t get why they ended up in a stream of rain falling down on them though. Won’t the baby powder and the rain make a paste?
SCORE: 29

Antonio, Wanya and Jodie are in the bottom three. It’s Jodie who goes home with a great big smile on her face and a perfect 10 on the score board. She’s super grateful for this experience and excited to start production on Fuller House TOMORROW. Keo looks sad, but halfway relieved. Everyone is shocked when Tom announces that two people will be going home next week.

That’s right. We have to make room for JoJo on Monday nights!

I think this is the best season we had so far! I loved the Carrie Ann team dance! It was powerful and mesmerizing! In the end, I am team Mark and Paige all the way! =)

Am I the only one that thought you could see right through Sharna and Paige’s nude color, soaking wet, costumes last night?? Yikes! But I loved that dance!! And I loved the dancing in silence concept. Very captivating. Didn’t Bruno also tell Jodie that in order to be more like Peta she had to act like a B!tch?! LOL! I love Peta!

i felt SO sorry for Wanya and Lindsey!!! i really like him, but i’m guessing he’ll be going home next week. i’m sure Ginger, Paige and Nyle will be top 3.

I didn’t have too many things, really any, that I disliked about this episode. Thank you for validating my feeling uncomfortable while watching Ginger and Val. Great dance but holy intimate! And, eid we really need the visual of Bruno naked on his balcony?! Overall. Good episode and, as usual, great recap!

I was amazed at how Nyles dance affected me. There were no words. I think thats the highest score ever for the first dance of the night.

Bindi’s cameo FTW! Her Instagram says shes in LA for the first annual Steve Irwin gala. I cant help but wonder if DWTS got her to the point of starting a fundraiser in his name bc she often stated how healing her dwts journey was.

I loved the judges group dances, I like when they change things up. For as much as Len always gets on the pros for having big production dances, he really went all out with a huge production!

Of course baby powder in water make paste. Didn’t they learn anything from Ross?