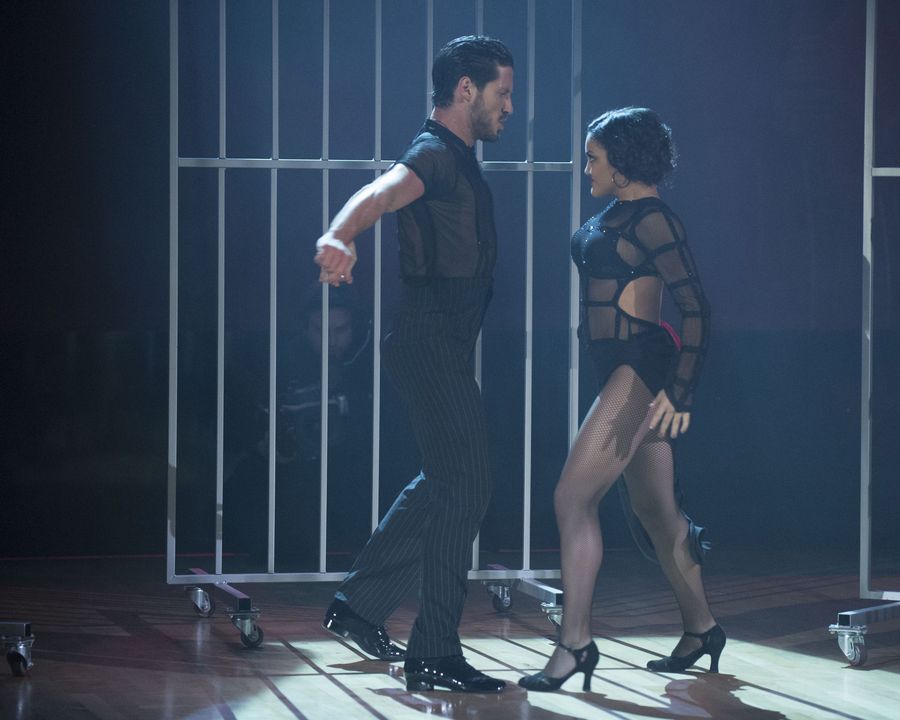 It’s show stoppers night. That’s an SAT word for Broadway. The ballroom is going FOSSEE, FOSSE, FOSSE and I loved every second. We learn that Sharna is still out for a knee injury, Calvin has a really good sense of humor and most dancers have no idea how to choreograph a jazz routine.

And what was up with my girl Idina Menzel? Elphaba was everywhere last night. It’s clear that she specified the only way she would make an appearance during Dancing with the Stars is if she got to be a judge, sing a song from her new album and have Tom Bergeron say her name no less than 16 times in 120 minutes. I understand that she’s a show stopper legend, but she didn’t really add anything to the judges’ panel. I prefer my Idina defying gravity. Or frozen.

Marilu and Derek
Samba
“Oh What a Night” from Jersey Boys
Mark Ballas is playing Frankie Valli on Broadway. Who knew? Since Derek and Marilu are dancing a samba to one of the songs from his show, he gives them all sorts of advice like, “have fun” and “you’ll do great.” Derek is secretly upset that Marilu has been messing up all over the place. He claims he’s been treating her differently because she’s the delicate age of his own mother. Well, not any more! He pushes her to greatness and, according to the judges, she really comes through with a solid samba! I have no idea. I was too busy explaining the origin of this song to my roommate Lara. Then we discussed the odd pairing of what is essentially a pop song and how it didn’t really “go” with Derek and Marilu’s traditional samba outfit. Plus, Derek didn’t button his shirt. The samba moves + Derek and Marilu + lyrics that detail the night a boy became a man = Hello Mrs. Robinson.
SCORE: 36

Calvin and Lindsay
Waltz
“Memory” from Cats
Lindsay and Calvin hop on a plane and travel to New York to enjoy head-to-toe makeovers, courtesy of the Cats makeup and wardrobe department. Other than Calvin forgetting to put on his man thong, it was a remarkable transformation. The fact that they didn’t dance in these exact same getups is a mystery to me. I guess a proper waltz doesn’t call for a feline onesie made of spandex. Instead, Lindsay wears a sparkly upper body suit with a flowing skirt trimmed with fur that matches the same fur around Calvin’s collar. I love a fur accent. And a French braid apparently, because I thought they moved beautifully. There was a twirly part in the middle that seemed clunky, but the dramatic drag, the traditional back bend ending and Leona Lewis’ Grizabella-inspired hair is a memory in and of itself.
SCORE: 37

Jenna and James
Jazz
“A Brand New Day” from The Wiz
Let’s face it: James and Jenna were ON last week. That makes it really hard to come back with something as equally astounding. This fact triples when your dance is jazz. For the second time this year, choreographers depend on the musical theater card to get them through the two minute routine. James was just okay. You can’t be “just okay” when it’s the week before semi-finals. Not only is his partner on the sidelines, but he has to stand out among scene stealers in the shape of a lion, tin man and scarecrow. He was the Wizard in a green suit and bowler hat, but I found myself wondering why James was dressed like the Riddler? Most of the time I wasn’t even watching him. In fact, I missed his mistake because I was reminiscing about how good Michael Jackson was in the movie The Wiz. It wasn’t his best night, but I have no doubt Sharna will pull this around. If she believes she can win with him, I bet she steps in the last week for the final four.
SCORE: 36

Terra and Sasha
Charleston
“If My Friends Could See Me Now” from Sweet Charity
Sasha knows that there are limitations on what Terra can do with certain steps. He depends on two things to get them through this very difficult Charleston: Terra’s confidence and a skirt made entirely of red feathers. There’s a lot of energy and fish faces. Both mouth the words to the song, which always feels distracting to me. Sasha picks Terra up and spins her and flings her and tosses her and every other type of lift you can think of in order to just get through to the last eight count. The bottom line is that even though Terra may not be able to do everything the others can do, she is a performer. No one can say she doesn’t give it her all when she’s on stage.
SCORE: 38

Jana and Gleb
Waltz
“She Used to Be Mine” from Waitress
Promos and social media made us think that Gleb was out with a knee injury too, but you can’t keep a hot Russian down. He choreographs a beautiful waltz full of emotion for Jana. She performed from the heart. Her ice blue dress with white apron and brunette hair made me think of Belle from Beauty and the Beast, only because I’ve never seen Waitress. I do remember feeling sorry for it during the Tony’s thinking, “There’s no way anything is going to be Hamilton.”  I wasn’t invested in the nostalgia of this dance, but I was most impressed with the actual dancing. They were my favorite performance of the night.
SCORE: 40

Laurie and Val
Argentine Tango
“Cell Block Tango” from Chicago
Val isn’t holding back this week. It’s time for America to embrace Laurie as a sexy woman. In order to do that, she has to fly to New York to see Chicago and have the merry murderers from the cell block teach her out to grind on Val’s lap and then kill him. I agree with Laurie when she looked at Val with wide eyes and said, “Shouldn’t we ask my mom first?” The 16-year-old mentally convinces her self that she’s just “wiping peanut butter off” of Val’s chiseled chest which is semi-covered in a mesh top. Fortunately, the dance landed in a “cheeky” category verses seductive. If we’ve learned anything from Taylor Swift, it’s that a bold red lip can make anyone look confident and sexy.
SCORE: 40

Last Men Standing Team Challenge
James and Calvin
Paso Doble
“No Good” by Kaleo
The Broadway theme was quickly ditched during the team challenge portion of our night. Calvin and James embrace their bromance and knock out a rockabilly shoot-em-out paso doble in front of a saloon. Calvin is the sheriff, James is the bandit and the girls are just hanging around so they can dramatically present their skirts to the boys who promptly fling them around for 30-seconds. This leaves Lindsay and Jenna in lacy onesies with cold shoulders and a belt that accentuates each of their tiny waists. Color me confused. It was all very Cinemax After Dark. Once again, not my favorite dance of the night. James needs to step it up big time next week.
SCORE: 37

Team Too Lazy To Look This Up Their Real Name
Marilu and Terra
Jazz
“Big Noise From Winnetka” by Bette Midler
I did not like this routine at all. Once again, no one really knows how to choreograph jazz. It felt erratic, confusing and cheesy all at once. Derek and Sasha threw everything into this routine, including the kitchen sink and the remaining cast of Dancing with the Stars. Truly. There was one part where Terra was the head and Marilu was the feet of headless/footless body. I know that doesn’t make sense to you, and it technically doesn’t to me either because I was so embarrassed for them, I had to hide behind a couch cushion. Not my favorite.
SCORE 36

Team Sisters
Laurie and Jana
Contemporary
“Bird Set Free” by Sia
The Russians know that they have two of the best dancers in the ballroom. So they choreographed another emotional piece and just let the girls do their thing. In a bird cage. Sure the interview told us they only practiced once together during camera blocking, but that didn’t stop Laurie and Jana from owning it on the stage. No one else could have danced the way these two danced. I believe they did the song justice. And I believe Val and Gleb’s see-through shirts did my heart justice. They deserved a perfect score.
SCORE: 40

With only moments left in the live show, Tom and Erin waste no time announcing who is safe. It comes down to Marilu and Jana. All of the viewing audience wait in anticipation as Jana is announced…SAFE! Marilu thanked everyone personally within a one-mile radius and hugged Derek with a death grip. I’m proud of her for lasting this long. I also want her legs.

What did you think? Is it between Laurie and Jana now? Are Calvin and James even in it anymore? Do you enjoy a mesh shirt like I do? Sound off in the comments!

Calvin is still my favorite! I hope it’s Calvin, James & Laurie in the finals. I think Terra is the weakest dancer left, and something about Jana just bugs me.

I could not agree more!

I also agree about Jana. She is very good but she was making me roll my eyes will all of the sister stuff with Laurie. A fakeness or something?

While I love Terra and think what she’s accomplished in the ballroom this season is nothing short of astounding, the final four should be Jana, Hinch, Calvin and Laurie. Laurie and Jana’s contemporary routine last night was amazing, incredible, fabulous…..you get the idea. I feel badly for Sharna as she sits on the sidelines. You can really tell that this season has meant a lot to her and that she wants so badly to be dancing with Hinch. Laurie always puts a smile on my face and makes me laugh with some of the comments she makes.

Hinch is still my favorite, even though it wasn’t his best week. Would love to see Sharna make it back next week. It seems like this season meant a lot to her. Love Laurie too. I didn’t think Idina Menzel brought anything to the show. I am so over celebrity guest judges on all of these types of shows. Terra should go home next, although Sasha has really done a great job making them look good together. She has a great spirit.

Would like to see Jana go home next, but I’m still loving Hinch, Laurie, Calvin, and Terra! I thought the guys’ Wild West dance was actually pretty cute this time around. I loved how the girls “broke” the prop beer bottles over the guys’ heads at the end and ran off with the bags of cash! LOL

I do really like Idina Menzel but sorry, if they are not dancers themselves, I am not interested in their critiques at all. It makes more sense for her to do The Voice, or some other singing competition. Just a waste of time when the other judges can actually say something of value. Bet you the pros hate it when there are guest judges and they have to pretend like they care.