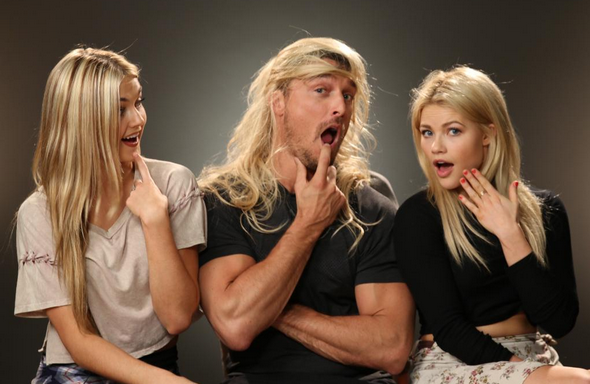 There are six couples left in the competition, yet Dancing with the Stars is still two hours long. How is this possible? And they didn’t even kick anyone off the show. We have to watch tonight to see the double elimination. Three hours of Dancing with the Stars? Who do they think they are? The Bachelor franchise?

The theme is America’s Choice. Just like the melting pot of these United States, America’s choice was pretty…eclectic. And some of the professionals decided to ditch what America wanted in lieu of keeping their shirts on.

I’m looking at you, Val.

Noah and Sharna
Tango
“Geronimo” by Sheppard
I’m quite confident that America probably didn’t vote for Noah to douse himself with tangerine-tinted spray tan solution. I also know that America asked Noah to perform in a military costume, to which he adamantly declined. Instead, he wore a white suit and held on to Sharna as she billowed around him. I was nervous he was going to fall the entire time.
Score: 31

The Farmer and Witney
Contemporary
“Lay Me Down” by Sam Smith
Witney and The Farmer decided to surprise the Twitter fan who suggested they do a sultry contemporary dance. As luck would have it, she and a dozen of her friends were all together, seated, in what looked to be a darling boutique. Yay for coincidences! During their dance, Witney tip toed around a bare chested Farmer as the audience held up their cell phones in solidarity. Upon a second glance, I noticed that they were actually fake candles like the ones my mom puts in the windows at Christmastime. Yay for free stuff! Just as I was about to mentally check out, The Farmer hoisted Witney above his head in an impressive Dirty Dancing move. I mean, he Patrick Swayze’d Witney as if she weighed nothing! The judges love him.
Score: 34

Riker and Allison
Viennese Waltz
“What Now” by Rihanna
One hilarious American suggested Riker and Allison dance in penguin suits with cactuses in the background (I believe the correct plural is cacti). Riker fought with Allison because she asked him to be vulnerable while he danced. He told her that was impossible since he’s trying to remember the steps. In the end, it was fine. Allison had enough emotion in her for the both of them. And the next couple. And the couple after that. Len was crotchety about the hold. I think he’s just ticked that America has no clue that the Viennese Waltz should never be choreographed to a Rihanna song.
Score: 39

Shark and Kym
Contemporary
“Champagne Kisses” by Jessie Ware
Kym and the Shark took to the street to ask middle-aged American women what they should do in their dance? Most of them suggested that Kym and Robert make out. Robert is all about this, and even has his chest waxed for the shirtless number on a rooftop. Well, it was a fake rooftop. There was lots of flinging and running and one very big awkward kiss somewhere in the middle. It ended with a choke hold. I was not a fan.
Score: 33 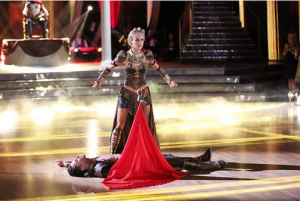 Nastia and Derek and Sasha
Pasodoble
“Centuries” by Fall Out Boy
This was a gladiator theme and Derek was the king of course. Nastia “beats” Sasha in the ring after Derek gives him the universal signal for execution—a thumbs down. She kills Sasha with a swatch of red cloth. And then Derek stands with Nastia as if he had actually danced the number. Which he did not. Derek bugs.
Score: 36

Rumer and Val
Rumba
“Perhaps, Perhaps, Perhaps” by Doris Day
This package begins with Val crying. He pushed Rumer too hard (hello whiplash) and then insisted on gimmicks to win. He is her protector and he failed since she ended up in the bottom last week. He’s throwing everything out the window and doing what he knows best—elegance. When he used Strictly Ballroom as his muse, I knew this was going to be good. She was in a sultry red dress. He was in a plunging neckline. There was an intense back light. All was as it should be.
Score: Perfect 40

Noah and Sharna with Emma
Salsa
“Mr. Put It Down” by Ricky Martin
Noah was worried about adding a third person. However, adding Emma means two extra arms and two extra legs! Sharna didn’t know what to do with all the appendages floating around. It was amazing choreography and Noah was smiling the entire time. I thought it was well executed.
Score: 32

Chris and Witney with Lindsay
Pasodoble
“Outside” by Calvin Harris
Bless his heart.
Score: 30

Riker and Allison with Brittany
Jazz
“Little Party Never Killed Nobody” by Fergie
Riker used to dance in a crew. I’ll give you a moment to digest that sentence. Are we good? Okay, imagine Riker dancing in the front with Allison and Brittany partying behind him. In a nutshell, they were his fly girls and Riker may have thrown a little Michael Jackson crotch grabbing action in there for good measure. It was non-stop.
Score: 39

Shark and Kym with Jenna
Samba
“Cinema Italiano” by Kate Hudson in the musical Nine
Robert was flustered handling two women. So they put him in some sunglasses to cover up his obvious nervousness. The dance was horrendous. And all the judges thought so too. They basically said he couldn’t dance, but he looked good trying.
Score: 29

Nastia and Derek with Sasha
Jive
“Vampire Weekend” by Diane Young
Nastia wasn’t picking up the jive at all. She became frustrated and refused to talk to the crew about what was going on. In her mind, that’s unprofessional. Never let them see you cry—no matter who “them” is. She bounced back, dancing with both the injured reserved Derek on one side of a wall and the bench warmer Sasha on the other side. If I hadn’t known better, I would have guessed it was a weirdo Mark number. The judges loved it.
Score: 40 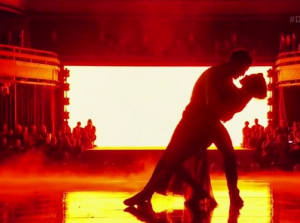 Rumer and Val with Artem
Pasodoble
Latin Music
Rumer was excited to get to dance with both Val and Artem. She wants to know if they are going to be shirtless? And excellent question. Val scoffs, annoyed that he and Artem always get exploited for their gorgeous bodies. They are more than pecs and handsome faces. Rumer reminds them that America chooses and America wants to see the abs! They do not comply. It’s a good thing he reached back into his Strictly Ballroom bag of tricks, or I would have not voted for them. It was powerful. There were no gimmicks. No tricks. Just dance. (Trademark pending until my lawyers speak to Nike.)
Score: 40

Tune in tonight to see who will be joining Tom and Erin in the semi-finals!

Tags: Dancing with the Stars

Hi Lincee! I couldn’t wait to see your recap today! I’m so ready for Chris and Shark to go; hopefully tonight?? I LOVE Riker! He is amazing and totally owned the trio dance! Is anyone else sick of Erin constantly badgering Kym and Shark to make out?? It’s so middle school; is she that fascinated by the thought of 2 adults kissing? Sad. One other thing; I love Derek’s choreography! Yes, he always gets good partners but there’s no doubt he’s the most talented person on DWTS and it would be a huge loss if he leaves the show so I’m sure there are perks when you’re as good as he is. Sorry fellow green beaners but that’s business!!

i think derek got partnered with nastia because they are both in new york during the week. he was partnered last season with bethany mota from youtube who was just ok. just saying, he doesnt always get the best partners. but yes, his fun and creative choreography and style do help his partners go far if not win.
i love to watch rumor dance! i hope she never stops dancing and after the show gets herself on broadway or someplace where she can dance. what a natural and so real on the dance floor.

What are your thoughts, LIncee, on the absence of Whitney on the last 2 episodes of DWTS? Are she and the farmer done already? To go from super supportive to not there seems like there may be trouble in paradise.

I was disappointed in Chris barely being able to hold it together when he was eliminated last night. Let’s be serious; he deserved to go home. He was light years behind the top 3 (Rumer, Nastia and Riker). Instead of being humble and acknowledging the fact that he was only on for that many weeks because of loyal Bachelor fans rather then for his dancing skills he seemed so disappointed. I think he has overestimated his popularity and its now time for him to go back to the farm and get out of the limelight if he has any hope of having a real relationship with Whitney.

It was so wonderful to hear Josh Groban on Tues.night and see Maddie doing a beautiful ballet dance and not one so frenetic she’s become know for.

I figured Shark and Farmer were going home and feel they were the right ones. On GMA this morning, Chris mentioned Witney is going to choreograph his first wedding reception dance with Whitney so I’m guessing things are ok between them…for now!

Totally loved the simplicity of Rumer’s dances on Monday and boy, did they turn things around by keeping it pure with few gimmicks.

I liked Nastia’s trio! I thought it was creative and feel bad she is being overshadowed by comments of being a cold fish. She holds her emotions in but I don’t mind that. She said she’s been judged since she was 5 years old…gotta have thick skin to grow through all that.

I think Nastia, Riker, and Rumor are all very talented and would be happy for any of them to win.

Thanks for another fun recap, Lincee!

Agreed with all your comments CO Kathleen! Love this blog for the fun and funny comments and insights! Thanks for keeping them coming Lincee!

“I’m quite confident that America probably didn’t vote for Noah to douse himself with tangerine-tinted spray tan solution.”

YES. Love it when you do that — read my mind, but make it funnier. Really looking forward to the next installment!