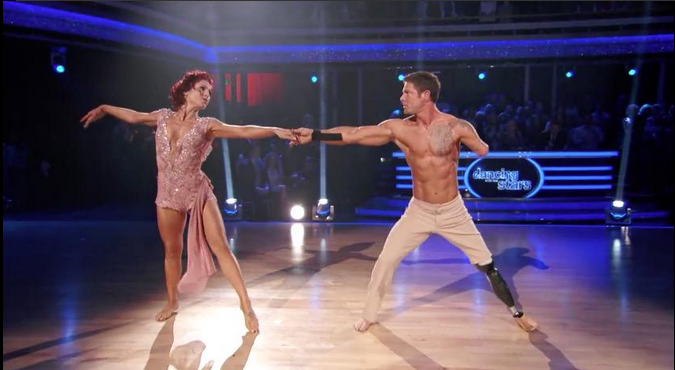 ‘Dancing with the Stars’ recap: Can I get a tissue?

This week on Dancing with the Stars, the producers do everything in their power to make you cry. Each contestant must perform a routine which symbolizes their “Most Memorable Year.” The dance is all about love, respect, honor, determination and whimsical costumes. And since most memorable moments revolved around death and loss, the entire cast, including the judging panel, found themselves fighting back tears for an entire two hours.

Of course, there were extenuating circumstances that had me scratching my head verses shedding a tear or two. I’m looking at you, Farmer. Let’s break it down, shall we?

Kym and Robert
Dance: Waltz
Song: “Last Waltz” by Engelbert Humperdink (How awesome is this name?)
Year: 2006
Memorable Event: Mother passed away from cancer
Kleenex Moment: Robert’s mom just happened to LOVE Dancing with the Stars. When he spoke about his mother in rehearsals, Kym began to cry. Then I began to cry. Then he shared with the camera, the moment she passed away. Her last words were, “I love you Robbie.” SOBBING. He dedicated the dance to her. It was an old-school waltz that was simply lovely. I liked that he wore long tails. Kym’s pink dress was perfect. I also appreciated that they weren’t sad, but rejoicing, knowing that Robert’s mom would have been so proud of her son. TEARS.
Score: 34

Riker and Allison
Dance: Tango
Song: “Shut Up and Dance With Me” by Walk the Moon
Year: 2014
Memorable Event: The year his band R5 took off—for real
Memorable Dance Moment: Riker is talented. Once again, I don’t think they need to further confuse their dance with so many stage props. This week, they started on a black and white checkerboard contraption. It looked like the eye test my grandmother has on her refrigerator. The judges admitted that this particular song was not conducive to choreography. The natural question one must ask is, “WHY WAS IT CHOSEN?” PS: That weird, distracting hair that flops in his face was back. Perhaps scissors should be the prop next week?
Score: 34

Michael and Peta
Dance: Rumba
Song: “Not My Father’s Son” from Broadway’s Kinky Boots
Year: 2014
Memorable Event: Coming out as an openly gay man in the NFL
Kleenex Moment: Michael’s dad wasn’t around growing up. Once he started playing football in college, he reached out to him to mend their relationship. Things were going well, until Michael came out on ESPN. His father did not agree with his lifestyle and is now no longer a part of his life. I’m not sure if they get to choose their dance style, but a rumba felt weird for this storyline. Rumbas are supposed to be sultry. It just didn’t translate well with the story he was trying to tell, in my opinion.
Score: 30

The Farmer and Witney
Dance: Rumba
Song: “The Book of Love” by Peter Gabriel
Year: 2014
Memorable Event: Going on The Bachelor
Memorable Dance Moment: Poor, poor Farmer. Rumba is not his gift. I’m going to go ahead and add “looking sexy” is not his gift either. He did try. Kudos to the ABC Intern for blowing up the stage with a thousand tea lights in white paper bags. The Farmer lost me when he ran off stage after his dance and tackled Whitney (the fiance, not the partner) right there by the judges table. It was a scripted moment for sure. She should have squeezed out a few more fake tears to really sell the fabricated moment. I will say that the most vulnerable I’ve ever seen him (besides the time he was talking to Becca in her hotel room once upon a time) was when he read the letter his sister sent in as an application for the show. I’d like to see more of THOSE moments.
Score: 27

Queen Patti and Artem
Dance: Jazz
Song: “Dan Swit Me” by Patti LaBelle
Year: 1973
Memorable Event: The birth of her son
Memorable Dance Moment: Patti didn’t make me cry, but she almost made me stand up during her performance! Sure she had an entourage with her on the dance floor, and that in no way is fair. But the woman can put on a show! She was all over the map, couldn’t breathe, and still killed it with her “stank” face. You know the one I’m talking about. Artem had the time of his life. The judges loved it. And she received ANOTHER standing ovation. Plenty of giggles. Plenty of wiggles. Long live Queen Patti!
Score: 30

Rumer and Val
Dance: Waltz
Song: “Turning Tables” by Adele
Year: 2014
Memorable Event: Owning who she is as a person
Kleenex Moment: Rumer shared with the audience that it’s very hard growing up with famous parents. A normal person would probably roll their eyes at this admission, assuming it’s “so hard” to grow up in such a privileged household. Rumer took it a step further, explaining that she was an extremely awkward-looking child. She has often been called “potato head” and has even been compared to a man. She got a little choked up when she reminded us that her mother is one of the most gorgeous women on the planet. She contemplated (and dare I say performed?) plastic surgery—but soon realized that was not the answer. The outpour of love that she has received on Dancing with the Stars has made her feel beautiful. She wants everyone to know that they deserve to be loved and they are valued. I cried. Julianne cried. The dance was so-so, but the message was impactful. And Val is still hot.
Score: 35

Suzanne and Tony
Dance: Foxtrot
Song: “Come and Knock On Our Door” of Three’s Company
Year: 1977
Memorable Event: Booking Three’s Company
Kleenex Dance Moment: Suzanne’s intro package was very sweet. She dedicated the dance to John Ritter and I once again tried to swallow down yet another lump in my throat. When they started dancing, there was an odd throw back to the Three’s Company set, and some awkward dialog between Tony and Suzanne. I hid behind my couch cushion. Suzanne was dressed as Chrissy, complete with purple leotard and dog ears in her hair. It had great potential, but it ended on a funky note. The judges loved it.
Score: 28

Willow and Mark
Dance: Contemporary
Song: “Atlas” by Coldplay
Year: 2011
Memorable Event: Being cast in Hunger Games
Memorable Dance Moment: Primrose needs to calm down. I know I’ve harped on her for reminding us every week that she’s only 14, but that doesn’t mean she needs to wage war against her elders. When she told the camera that “she is good, if not better than the adults,” I bristled. Then Mark choreographed a number where she kills everyone in the routine. This does not bode well if the show producers hand out a Miss Congeniality award.
Score: 39

Noah and Sharna
Dance: Contemporary
Song: “American Solider” by Toby Keith
Year: 2005
Memorable Event: Losing a leg and an arm in Iraq
Kleenex Dance Moment: Shut up. The entire thing made me cry. I had to rewind once because I couldn’t see the TV screen. We learned more about his accident (trip wire) and that everyone thought he would surely die. Noah was depressed until one day, he looked in the mirror and made himself stop thinking about what he didn’t have, and start concentrating on what he did have. His dance was full of hard lifts. At one point, he lifted Sharna over his head like a figure skater. I was amazed and astonished. By both the dance and by his abs. Heaven help me.
Score: 32

In the end, Riker, Michael and Willow were in the red spotlight. But it was Michael who didn’t secure enough votes to stick around another week.

What did you think? Did Michael deserve to go home? Do Noah’s abs and dimples make you go weak in the knees? Was it weird that Willow killed everyone in her dance? Sound off in the comments section!

Tags: Dancing with the Stars

I know folks often feel Derek is favored but boy, can he choreograph. Every time. He is creative and moves with such strength and beauty himself. Nastia – I’m memorized by her beauty in motion as well. So fun to see them dance.
I’m enjoying the Farmer and hope he stays around awhile. He such a “regular” kinda guy but holding his ground!
Noah – what an inspiration for me to never complain or make excuses again. He is really doing well and I’m impressed with how Sharna is choreographing their dances, too. Definitely standing ovation worthy every week so far.

I agree about Noah – totally makes you think twice before complaining that things are difficult, etc.

Thanks for the recap, Lincee! It’s a bright spot in my week.

Love Noah!! And Nastia!! Thanks for the recap!

I know you aren’t doing fav. quotes anymore, but I hafta say….

I agree Jennifer G! The mention of the Farmer’s obvious adoration of Becca was hilarious.

Thanks Lincee for recapping and watching DWTS with us!

Riker is a darkhorse for me. I didn’t want to like him, but his dancing is so great! He reminds me of Cody Simpson from two season ago (Whitney Carson’s first partner). Criminal he went home too early.

It’s unanimous on the fav line, because that one gets my vote, too! I thought it was very creative to use the mirror to make Noah look “whole” again. That certainly had some impact. Sharna is doing amazing things. I love her. Not as much as I love Lincee and her awesome recaps, though.