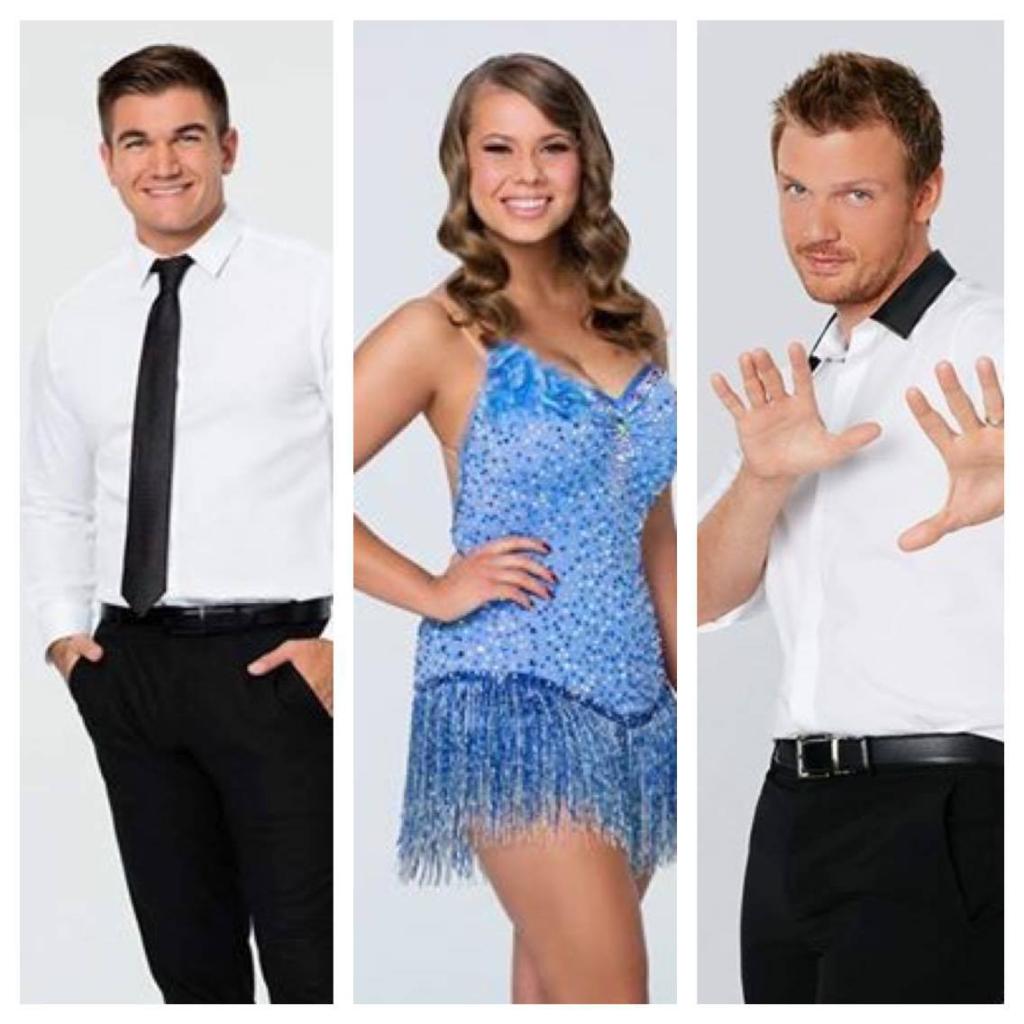 The Dancing with the Stars season 21 finale packed in a ton of entertainment in just two hours. Erin Andrews covered a huge dance extravaganza at The Grove with a cast of characters who did their best to channel their inner Rockette. Chaka rocked some serious red feathers. Hayes was adorable. Victor popped out of a present on the stage. Peta is definitely back. Allison is seriously showing and could have easily ridden in on a donkey. It was a Christmas-themed extravaganza after all. Gary Busey was wearing a Santa hat driving a trolley for goodness sake! (PS: WATCH OUT PEOPLE!)

After the first commercial break, Chaka takes the stage to sing “I’m Every Woman” with a gaggle of gold lame dancers. She is totally in her element. Then the cameras cuts to Tom in the studio where Kim dances her I Dream of Jeannie number (the one she was supposed to perform but couldn’t due to her stroke) with Tony. She was not in her element. Bless her. She did nail the shoulder shimmy and open mouth fish face/surprised look while rocking a hot pink costume which showcased her bare midriff. I think she would consider that a victory.

The pros are showcased in a dance that screams, “HEY! BUY TICKETS TO THE TOUR!” This happens three or four times during the length of the show. Erin takes the stage and introduces a blooper package featuring Tom Bergeron. What do we learn? He does a mean robot, has his own bobblehead and looks darn good in a pair of blue jeans. Nice butt Tom!

Paula and Louis perform their Gilligan’s Island number. Emma and Gary perform one too. Lord bless them both.

The producers throw together a nice package digging deeper into the Carlos/Alek bromance before Carlos’ solo. Remember his “Pony” dance from Magic Mike? Well this time, he was joined by all the pro dudes. None of them had their shirt on. Just as I was about to type, “The Santa hats bug…” they threw them into the audience. Val and Artem’s abs took center stage and the girls when nuts. Merry Christmas from Dancing with the Stars everyone!

Over at The Grove, Andy Grammer sang his hit “Good To Be Alive” and was joined by the backup guys wearing black pants and red jackets. They looked like waiters at a fancy pants restaurant. Once he hit his last note, the camera switched to the ballroom where Lindsay and Alek performed their “Don’t Stop Believing” number on the front porch of that fake house. Alek’s cheerleader stunt moves were on point.

A quick “looking back” montage (disclaimer: the entire show was a big ole recap) featured lots of tears, passion, Val booing his brother and Paula showing her butt. Thank you for that show runners! Elle King sang “Ex’s and Oh’s” right before Hayes and Emma performed their contemporary out at The Grove. I’m pretty sure he wanted to pimp out his friend’s song “Stitches” and he looked great doing it. Guess what? Hayes is joining the tour! Do you hear that? It’s the sound of sales skyrocketing for a chance to swoon at the Vine genius. Well played DWTS. Well played.

Alexa and Mark performed their Breaking Bad number. I still don’t get it. I also don’t get Mark’s man bun. What I do get is why the producers made Gary Busey recite “Twas the Night Before the Finale” using phrases like “costumes were sequined and beaded with care,” as well as “visions of mirrorball danced in their heads.” Kudos for adding Victor as an elf and Paul as a crusty Mrs. Claus.

Bindi and Derek performed their blindfold routine right before a “giving thanks” montage. Bindi, Paula, Alek, the Backstreet Boys and Santa wished everyone a Happy Thanksgiving. The camera cut to The Grove where someone sang “Where Are You Christmas” as Val and Emma twirled around in fake snow. The transition was odd, but who cares? Hobby Lobby’s had Christmas out since before Halloween. ’Tis the season people!

Chaka and Andy take the stage next to sing “Baby It’s Cold Outside.” At this point, I had caught up with my DVR and was excited to see the new Tina Fey and Amy Poehler movie trailer Sisters! Once we came back from the commercial, none other than Len Goodman had an announcement. No, he’s not joining the tour, but he IS coming back next season. Hooray for crotchety old British guys!

Tom finally announced that the contestants would be dancing their 24-Hour Fusion numbers. I know what you’re thinking and the answer is no, I didn’t have a clue as to what he was talking about either. Apparently after last night’s show, each pair was given two dances they had to fuse together with one song. And only 24-hours to choreograph and practice. The pressure is on.

Nick and Sharna
Salsa and Tango Fusion
“Turn Up the Music” by Chris Brown
Sharna is in a fabulous red dress. Nick is in all black. They salsa the crap out of the routine. At one point, he takes off his jacket and she discards the bottom portion of her dress. Then he flings her around his neck in something I’m calling “The Superman.” He really did leave it all out on the dance floor.
Score: 30

Alek and Lindsay
Rumba and Tango Fusion
“A Sky Full of Stars” by Coldplay
Poor Alek didn’t stand a chance. He looked horrified the entire number. Even during the Dirty Dancing slide (trademark pending) which is a no-brainer move. It wasn’t great. I think it’s mean that they gave him the rumba, knowing that it’s his weakest dance. It’s a good thing he’s going to be on the tour so he can really work on his hip action with Emma.
Score: 27

Derek and Bindi
Cha-Cha and Argentine Tango Fusion
“Timeflies” by All the Way (not a typo)
I think Bindi has lost at least 10 pounds during this season. She looks great. Derek said it best when he thanked her for teaching him how to struggle well. He said that she looks at a challenge and smiles. I believe that. The choreography was fast, fun and clean. She deserved to win. All the judges told her that season 21 was their favorite season because of her. What a compliment.
Score: 30

Tom makes Bindi and Derek get in a golf cart with him so a light tech guy can run them over to The Grove for the third-place results. But before Alek gets the bad news, Nick Carter serenades the masses with his new single “I Will Wait.” Sharna looks on longingly at her partner, while the other contestants feel weird standing there. Fortunately, the slow motion recap montage begins playing and all is well. At the end of the number, Tom announces Alek as the third-place winner. And then everyone hopped a golf cart to go back to the ballroom.

Back inside, a solid minute passes before Bindi is announced as the season 21 winner. Happiness rains from the ceiling as she smiles. Her mother’s reaction was precious. Ever the true sports reporter, Erin pulls Nick aside to have a quick second-place talk. He graciously announces that Bindi deserved to win. And he was right.

What a great ending to a pretty solid season. Now bring on The Bachelor!

Agreed! Bindi all the way! Thanks for your DWTS recaps this season. I looked forward to them every week!

Great recap Lincee and kudos for posting so quickly. It was a great show, lots of fun, and lots of abs. Excited to hear Len is coming back next season, missed his cranky self this time.
Happy for Bindi, she is a sweetheart and a joy to watch.
Bachelor is only weeks away, can’t wait.
Happy Thanksgiving!!

Thank you for your recaps this season! Ive really enjoyed them!

My fave part of the season was watching Bindi heal. She stated tonight she hadnt expected to have this type of platform to open up about her loss, but it seemed to come at the best time for her. She seemed to just blossom over the three months.

To echo the other comments– Thank you, Lincee, for recapping this season! All of your posts are a joy to read. Really looking forward to The Bachelor 🙂

And I’m SO happy for Bindi! I love Derek, but in my heart, I wanted Sharna to get a win….yet at the end of the day, it’s about the stars themselves, and Bindi was the clear standout– both in dance and in how much joy she brought to the rest of the cast and the viewers!

With you all the way, Shannon. Sharna seems like not only a great pro, but also kind of a therapist. I think I’d like to know her (and I also love Derek). But Bindi deserved to win.

It was fun, Lincee, thanks for recapping the show! Can’t wait to see what you punch out for The Bachelor.

I loved your sly comment that Alek is going on the DWTS tour so he can work on his hip action with Emma!
Thanks for the recaps every week. I always look forward to them.

Nick was such a good sport and gracious in his loss.

I really, really wanted to see Sharna get a win. I feel like I’d be friends with her if I knew her. Girl’s got talent for days, seems like she is an excellent teacher, and her choreography is outstanding (remember last year with Noah Galloway?). Derek is amazing, yes, but I feel for Sharna to keep getting so far only to never have her partner get first.

Excited for another season of the Bachlor, but I have to say, I’ve already started calling him “Boring Ben”. I hope I’m wrong!

On this official holiday of giving thanks, I want to thank YOU Lincee for all the ways you brighten so many lives. Through your wit, your observations and mostly your faith – you live it with true grace.

I loved this season and am sorry to see it end. BIndi was that rare individual who touched many, many lives. I think she was meant to be with Derek for him to learn a bit more humility (I’ve always liked him but did think he was getting a little big for his britches.) I hope Sharna will have her day but more than that I hope they keep pairing her with dancers that keep her on to the end – she is so fun to watch (her choreography is some of the best.)

Many blessing to you Lincee – and again thank you for all you do and who you are.