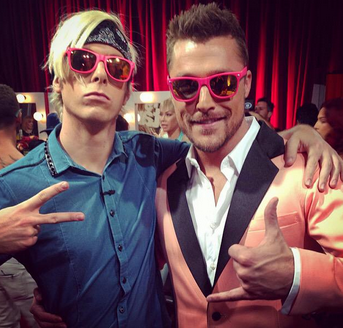 As Tom Bergeron announced that this week’s Dancing with the Stars theme was “Spring Break,” several things went through my mind.

The night was mediocre for me. And it wasn’t just because Val was NOT shirtless (really Dancing with the Stars costume department?). Noah’s bare torso sort of canceled out that mishap. The night was boring for me because the dances were meh. It’s obvious that the contestants are tired. Their lack of energy translated onto the screen.

But there was a bright star in the middle of a lackluster group of contestants. That star is Riker.

Patti Artem
Quickstep
“Heat Wave” by Martha & The Vandellas
Queen Patti told us she would be wearing a bikini during her number. Then she giggle and said, “Psyche!” 1.) Let’s bring “psyche” back and 2.) This lady is delightful. I don’t care that she wore a white caftan as the JV girls pranced around her in bikinis. The woman accidentally flung her own shoe (aimed at the head of that one backup dancer for sure) and then danced the QUICKSTEP lopsided. Tom rushing to retrieve the shoe after the performance and then announcing he was going to sell it on E-Bay was the best line of the night. Gotta love The Berge.
Score: 29

Derek and Nastia
Tango
“Summer” by Calvin Harris
In case you didn’t know, Derek and Nastia are the busiest people on the planet. You should feel sorry instead of punishing them by not voting because she is an Olympic champion and she can’t help but be naturally talented. Their dance was blah to me. I’m not a huge fan of techno music. Dancing to low bass beats while tangoing around the floor seemed odd. I did enjoy when Derek whipped her down on the ground and Nastia twirled in plank position like a helicopter blade. Excuse me while I go work on my core by doing a few thousands pushups.
Score: 34

Willow and Mark
Salsa
“Tequila” by The Champs
Newsflash—Primrose has an extra rib. We’re unsure if this is true or if the Dancing with the Stars doctor is trying to score some sympathy votes because the “I’m on 14” bit has run its course. Willow and Mark danced with 90 extras. You can imagine the duck faces with that many teenagers on stage. (GET OFF MY LAWN.) Willow’s fluffy yellow skirt was fun, but you could tell she was tired. Must be that extra rib weighing her down.
Score: 34

Kym and Robert
Jive
“Surfin’ Safari” by The Beach Boys
Robert isn’t used to being at the bottom. Fortunately, his last place status has made his connection with Kym so much stronger. Fear of not making out behind the scenes will do that to a person. They placed an entire car on the dance floor for 10 seconds of choreography. Kudos to the ABC Intern for securing that Thunderbird. Robert was on the beat, but his timing was off the entire dance. With that said, they looked like they were having a ball. She was dressed like Barbie’s older sister. He looked like Ken’s dad.
Score: 28

Noah and Sharna
Rumba
“Waves” by Mr Probz
In the intro package, Sharna and Noah get into a “you’re not respecting me” fight. Then the camera cuts to the two of them preparing to dance. The intro package haunted Noah the entire time he performed. Some say he was off. I wouldn’t know because I focused on his abs. They were definitely ON.
Score: 29

Rumer and Val
Jazz
“Bootylicious” by Destiny’s Child
Sweet Val is not bootylicious. It’s not in his Russian heritage. Rumer, on the other hand, has plenty to go around. So much so, that I saw more of her inner butt cheeks than I care to admit. And there was some seductive floor crawling by Rumer, flanked by her all female entourage. I think it’s a travesty that I could probably sketch out the inner undercarriage workings of these young women. YOU ARE A PRIME TIME NETWORK, ABC.
Score: 32

The Farmer and Witney
Vienese Waltz
“Hopelessly Devoted To You” by Olivia Newton-John
Nothing says “Happy Hour at Senior Frogs” like the most popular ballad of 1978 where a girl wanders around a Pink Lady’s backyard in her nightgown. That random song choice aside, I did enjoy the montage where Witney is teaching The Farmer how to feel the beat. He roams around banging things, clapping his hands and stepping in time with the music a la Footloose. After all that, I had high expectations of him performing as Willard did at the prom. And to be honest? It wasn’t that far off. You go Farmer!
Score: 31

Riker and Allison
Samba
“Work It” by Missy Elliott – JUST KIDDING
“Want To Want Me” by Jason Derulo
Due to Riker’s convictions of dancing to a rather sexual song, he and Allison lost a day waiting for producers to secure a substitute. Then he went on tour with his music group. Allison basically made up the dance and taught him at the same time. And it was really fun. Allison’s earrings were flying. Riker’s hair was flying. There was enthusiasm. You can’t teach that. I want him to win!
Score: 37

Team Yolo
“Wipeout” by the Surfaris
First of all, you know how I feel about the term YOLO. 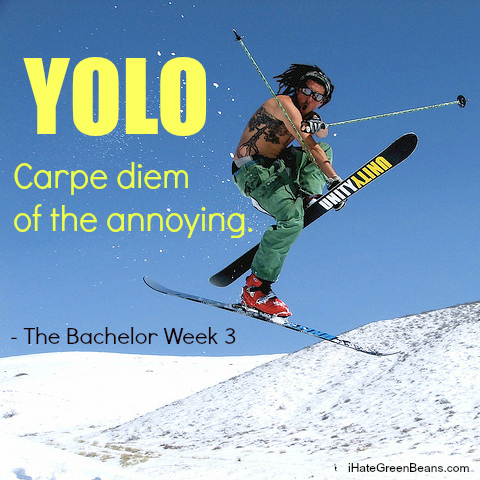 Nastia is the group captain. She gives everyone a pep talk and then she and Derek leave for New York. “Good luck teammates!  We’ll learn the dance in five seconds when we get back!” In a nutshell, there were a lot of beach balls, colorful towels, Noah flung Sharna around, lots of “o” mouths and the entire catalog of Beach Blanket Bingo choreography. I considered it a hot mess. The judges loved the chaos.
Score: 39

Team Trouble
“Trouble” by Someone I’m Too Lazy To Research
As team captain, Rumer explains that she wants Breakfast Club to meet Grease. I was nervous that Witney was going to show up in her pink nightgown again, but the “Grease” part of the performance remained a mystery. There were jocks, nerds, bad boys and a teacher’s pet maybe? Queen Patti bounced along pretending to write on a chalkboard. That was the extent of her participation. Riker rocked it nerd style. Chris wore a letter jacket without a shirt. And Rumer kept her butt secured in tight leather pants. That was a victory in itself.
Score: 39

Noah, Riker, Robert and Queen Patti were left in the red light of doom. But it was Patti who was sent home with nothing but a South Padre spring break 2015 t-shirt and some sketchy pictures on her phone she doesn’t remember taking.

Who do you want to win? Is Riker going to take it all? Or will he have to fight with a bootylicious spawn of Bruce Willis? Sound off in the comments!

Tags: Dancing with the Stars, DWTS

I pick Rumor vs. Ryker for the final two….

Enjoying your DWTS recaps each week. I love Val and look forward to his shirtless performances. If Ryker wasn’t there I would be voting for Val to go all the way to the mirror ball trophy. It’s just that Ryker has such energy and zest that he has stolen my heart (in a totally platonic way). He has the longest, slim legs ever. Have you noticed? Voting for him and hoping he makes it to the finals.

I am pulling for Ryker all the way. Our farmer actually didn’t do as bad as I thought he would, and I loved him in rehearsals trying to keep the beat. It totally reminded me of Footloose!!!

I agree. The Footloose montage was adorable.

I am sooo enchanted with Riker! What a surprise to find him so likable (and he’s almost half my age). He has such a great attitude and a unique personal edge in the way he moves. Just love him!!

I still feel like Nastia is darn near perfect and I don’t really see a disconnect with her and Derek. Feel bad for her because she has strong, beautiful lines in every move yet most of her feed-back from the judges begins with, “Sorry, there’s a connection missing.”

Rumor can definitely dance but a tad more length to the hem of her costume and slight modifications to a couple of her moves would have made her dance more appropriate for a prime-time audience.

I smiled through The Farmer’s whole dance. He did so much better this week that he’s actually looking like a dancer now!

You crack me up Lincee…Queen Patti aiming her shoe flick at the youngin’s dancing around her! I’ve loved everything about Patti each week. She may have had a minimalist style about her but she also had the “cool” part the whole way and I enjoyed her attitude. What a great spirit she has – I hope I can be like her (in my own little world) when I’m her age.

Thank you for taking the time to recap DWTS, Lincee. Always enjoy your insight!

So true CO Kathleen. Rumer needs a longer hem! And Nastia is perfect, so they have to talk about her lack of emotion. Which is normal for someone who was trained their entire life to not show it!

I LOVE RYKER!!! If he gets booted, I will flip.my.lid.

CO Kathleen…I agree with you!!!! Queen Patti may not have the same skill level but she is incredibly classy, polished, endearing, grateful for life, softly elegant in attitude. She just oozes contentment and who doesn’t want to be around that? It is easy peasy with her. I too hope I can be that way when I am her age and not be a crabby and bitter all around pain in the a$$.

Thanks Lincee for recapping DWTS, so glad you are!
You rock.

Yes! Love all your descriptive words for Patti! She really was all that.

Put me also in the camp of Patti’s fans – she is class personified! She just looks like she would be a very calming presence and I bet that Artem really enjoyed working with her, little drama.

Speaking of which, wouldn’t you just love to know who the worst “star” partners of all time were? I bet Kate Gosselin ranks pretty high, if not the highest…

That’s an interesting thought. You know some of these stars had high demands.

Where was the black modesty box during Rumer’s dance??

Indeed! ABC totally has access to it. I’m going to make a call…

Lincee, thank you for recapping DWTS! I always love your comments, even though this week I’m so late getting to them! I’m team Riker all the way! He and Alison can DANCE! Enthusiasm, humility, talent galore! I love those two! I like Patti but it was definitely her time to go. Rumor’s dance was vulgar. I hope she doesn’t win.

I LOVE your recaps of anything and everything, so I don’t want to criticize. However, Val and Max (and Karina) are Ukrainian, not Russian. 🙂

I’m late to the party, but…the lines that made me decide to forego my ab workout tonight are:

“I did enjoy when Derek whipped her down on the ground and Nastia twirled in plank position like a helicopter blade.”

“Nothing says “Happy Hour at Senior Frogs” like the most popular ballad of 1978 where a girl wanders around a Pink Lady’s backyard in her nightgown.”