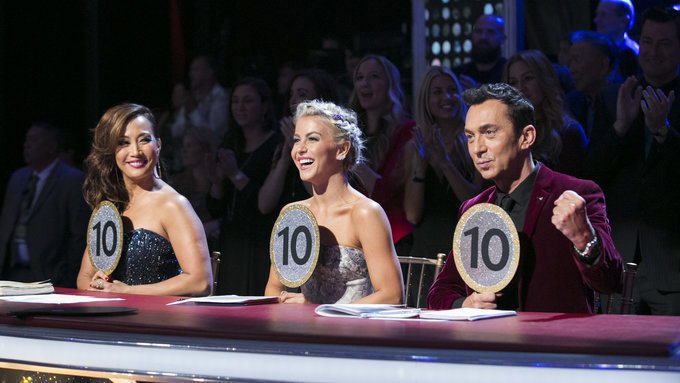 ‘Dancing with the Stars’ recap: The Finals

It’s the Dancing with the Stars finals and everyone is in major inspirational catch phrase mode. Contestants have “nothing to lose and everything to gain,” while pros are “in it to win it.” The producers decide to celebrate the last few days of season 21 with a party vibe. Meghan Trainor is obviously invited to be a guest performer.

She opens the show with the kicky song “I’m Better When I’m Dancin’” wearing a black lycra number with fun latin-feathery fringe. Then a bunch of boys in white suits with tails take the stage and I’m confused. They are followed by a gaggle of girls who are in the same outfit I wore when trying out for drill team in 1992. Once a group of random non-pro dancers pop up in shorty shorts and t-shirts, I decided that ABC was going for an eclectic thing. At least Meghan didn’t Marvin Gaye and get it on with any of the contestants…

Tom explains that the contestants will be dancing a Judge’s Choice and Freestyle this week. First up? Carlos and Witney. Raise your hand if you knew they were doomed based on the dancing lineup alone? Was that just me?

Carlos and Witney
Judge’s Choice: Bruno
Dance: Foxtrot
“The Hills” by The Weekend
Carlos has never received a perfect score and he is determined to get one this week. Bruno helps him pull back his shoulders and present dainty fingers while in rehearsal. Witney tells him that the foxtrot is the hardest dance and she’s glad that Bruno picked it because she doesn’t back down from a challenge. Noted. She also says, “Nothing worth having comes easy. Will Smith said that.” Will Smith…Teddy Roosevelt…who cares about correctly crediting inspirational quotes when they are getting the job done? Carlos swirls through his foxtrot. It was dramatic, smoky and extremely sexy. There was some questionable between-the-leg choreography at the end, but the judges still loved it.
Score: 30

Alek and Lindsay
Judge’s Choice: Carrie Ann
Dance: Rumba
“The Pieces Don’t Fit Anymore” by James Morrison
Lindsay and Carrie Ann tried with all their might to get Alek’s hips to sway and move, but they were as stagnant as his stern face. Even the lavender silky pajamas with the extra rhinestone bling resulted in exactly zero chemistry. Sure he can twirl Lindsay around like nobody’s business, but the passion was not there. When the only compliment you get is, “You really applied yourself,” you know things are not good.
Score: 27

Nick and Sharna
Judge’s Choice: Juliane
Dance: Jive
“Runaway Baby” by Bruno Mars
Julianne picked the jive to give Nick a chance at redemption. You may remember in week two, he slipped on the floor and never really recovered. Julianne taught Nick how to pretend the floor was hot lava. This entire exchange made me miss her being IN the show, rather than ON the show. Nick finally gets the lava trick and kills the jive. No one could have been more proud of him than his brother who was sitting in the audience. Nick was so excited that he picked Sharna up (carrying over the threshold style) and we saw her bare butt. Yes she had briefs on, but they were so far up her crack that I could draw her cheeks if I had to. No one should ever have to type that sentence in a recap.
Score: 30

Bindi and Derek
Judge’s Choice: Carrie Ann
Dance: Quickstep
Song: “Dr. Bones” by Cherry Poppin Daddies
Carrie Ann reminds Derek not to break the rules like he did the last time he was in the finals. He listens and promises to never break hold with Bindi. He brings in a nice entourage of JV dancers to dance (quickly) around Bindi who is in a rather fabulous silver, glittery dress that I desperately need even though I have no occasion with which to wear it. Derek mouths the words. We all know how I feel about that. My favorite part was when Bindi rolled under all the dudes and they hopped over her as she passed by. Everyone was exhausted at the end. The audience went nuts.
Score: 30

Carlos and Witney
Dance: Hip Hop Salsa
Song: “MTF” by Missy Elliott
Witney invited every random dancer in the opening number to join her and Carlos for their freestyle. Just as she’s instructing the cute one to do this really cool move, Carlos wisely asks her if the entourage is getting a bigger spotlight than them? Shouldn’t they be the ones to have the epic moment? Instead of crying or complaining that he doesn’t know what he’s talking about, Witney actually listens. She ditches featuring the randos in lieu of an epic moment that includes Hayes, Alexa and Paula of all people. Why not? Let’s grab Gary Busey while we’re at it. Everyone dresses in football jerseys. Carlos and Witney hip hop in a round, dancing with different randoms and past contestants. It was as awkward as you are imagining. They threw in some salsa for good measure in the middle. It was more of an “E” for effort on the creative front.
Score: 30

Alek and Lindsay
Dance: I’m going to call this contemporary?
Song: “Marching On” by ONEREPUBLIC
Lindsay is brilliant when it comes to choreography. She knows that Alek’s biggest strength is his physical strength. She also plays the military card without playing the already twice played patriotic card. An obstacle course is designed, complete with big wall and steep incline. Alek basically picks her up and puts her where she needs to be the entire time when they aren’t dancing or climbing over things. It was actually very cool and you should watch it on YouTube. At one point, he bench presses her like he loves to do. Their military JV peeps did just enough background dancing to not pull focus, except the part where Lindsay climbs over a huddle of them to launch herself into Alek’s big strong arms. At the end, they climbed up the big wall and executed a trust fall backwards — looking at each other and holding hands. Nice move Lindsay.
Score: 30

Bindi and Derek
Dance: Contemporary
“Footprints in the Sand” by Leona Lewis
Remember how I said Lindsay was able to pull the military heartstrings without going full-blown patriotic? Derek did the opposite of that. He wanted one more dance where he choreographed something featuring Steve Irwin which will inevitably bring the audience to tears. He wanted it to be stripped down. No backup dancers. No smoke. Just dance. She’s in a white dress. He’s in white pajamas. There are shadows everywhere. They dance and twirl and look very pained when they stare at one another. The stage is huge and it confuses me for a moment and then I decide I don’t care. The CGI team makes the floor look like sand as Bindi and Derek walk down the center of the performance area. You can see a set of footprints walking with them. And it ends with a picture of Steve and Bindi. And then we all cried. Including Bindi’s mom. And her brother. And that Asian girl in the audience. And the judges. And me. Carrie Ann said it best: “You dance in the moment. That’s what we love.”
Score: 30

Nick and Sharna
Dance: Hip Hop / Jazz
Song: “Larger Than Life” by the Backstreet Boys
I’m sure Nick LOVED performing right after Bindi’s tribute, but these are the breaks. He wants to go out with a bang and in order to do that, he must dance to one of the BSB’s biggest songs. Sharna invites the jilted pros to come dance with them on stage. It’s basically a Backstreet Boys’ concert, but with just Nick as the headline. I imagine he felt just like Justin Timberlake. Sharna rocks a metallic grey leotard. The dance progresses onto that round stage where all the audience members are gathered at the edge. It was a bunch of old white people clapping along. And Hayes. Nick had a ball dancing it. And that made him larger than life.
Score: 30

Not everybody can move on to the results show. Sadly, it was Carlos who got the boot. I don’t think anyone was surprised. He thanked God, his partner, his new friends and his wife. I think Carlos is going to be just fine. Witney, on the other hand, looked TICKED! Hell hath no fury like a pro dancer scorned.

Will Smith…Teddy Roosevelt..Who cares about correctly crediting inspirational quotes as long as its getting the job done? Best Line!! Lincee thank you for pointing out the mish-mash of costumes{ word used loosely} in the opening number. I also thought Witney and Carlos were doomed with the first slot. Other notes: Witney said the Foxtrot was the hardest dance, then Carrie Ann and Derek said the quickstep was the hardest. Not being a dancer, which is it? How did Carlos decide to pick Paula? Was anyone else feeling old and rate G when Meghan Trainor, Arianna Grande and Who is Fancy? all lusted after the same set of boys?? Derek should nt have trotted out dead_father photos AGAIN. Andy Grammar looked miffed. He only had one shot to dance for Mama. I thought Derek shouldve left well-enough-alone. We HAd that week.

” Nick was so excited that he picked Sharna up (carrying over the threshold style) and we saw her bare butt. Yes she had briefs on, but they were so far up her crack that I could draw her cheeks if I had to. No one should ever have to type that sentence in a recap.”
Lincee…YOU are the QUEEN of RECAPS!!! Thank you, thank you, THANK YOU!!!!

Bindi is a good dancer and cute and all, but Jeez! She’s not the first person to lose a parent. Enough with tugging the heartstrings already.

Have to agree that Bindi is not the first contestant to lose a parent and Derek should have dropped that theme several weeks ago. Love the girl, she is cute and a good dancer but enough pulling at the heart strings.
Have you noticed how her costumes are always so matronly? She is a teenager and they dress her so frumpy. Also, her hairdos week after week are the fugliest ever? Why?

“She also says, “Nothing worth having comes easy. Will Smith said that.” Will Smith…Teddy Roosevelt…who cares about correctly crediting inspirational quotes when they are getting the job done?”

Liana, I agree that the hairdos they give Bindi are terrible, but as a fellow big-busted girl, sometimes you gotta go frumpy to get the support. In Bindi’s costumes, I recognize the plate armor of super support. I’m guessing she’s also a fairly modest girl.

I really, really like Sharna. A LOT. She is a great choreographer, a fantastic teacher, and a really talented dancer. She also looks great in red, which I think is why she wears it so often.

Lincee – I agree, I miss Julianne being a pro on the show. My husband said that her lava bit was “the most adorable thing he’d ever seen on the show.” Of course, he’s seen exactly 2/3 of one season, so his threshold is pretty low.