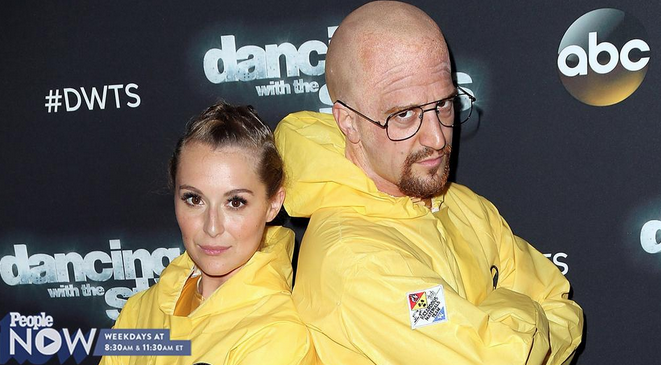 In one week, certain members of the Dancing with the Stars cast have managed to shake things up on the competition. Kim had a mini-stroke (whaaat??!!) and documents her three-day stay in the hospital. Not being able to fly + not being able to practice + not being able to perform = elimination. Tom Bergeron recites the official rules that were created in 2005 and they are unflinchingly rigid. If a contestant’s health is at risk, he or she must drop out. Kim demands a recall through Skype. She does not get it.

This makes Bindi nervous because her foot is hurting. She smiles through the pain, fearful that ABC lawyers will come busting through the door waving legal documents. She’ll be okay because BINDI HAS A BOYFRIEND who can take care of her. How did we not know this? What about Alek? Should I fully support Lindsay’s decision to pimp him out to other rhinestone-clad divas of the ballroom? Do we even know Jenna? Can she be trusted?

It’s a good thing we have Alfonso Ribeiro as a guest judge and The Muppets as special directors of the show. Did I need to see Miss Piggy kissing Derek’s bare torso? No. No I did not. But I do love TV and am proficient in theme song karaoke. Bring on the dancers!

Carlos and Witney
Jazz
Theme Song: Golden Girls
I don’t know what it is about Carlos and Witney, but their chemistry is off. Or maybe it’s non-existent. She complained about Carlos’ need to be right the entire opening package. I felt uncomfortable and have little interest in their partnership. They dressed as old people who whipped and nae-nae’d across the floor. I may have enjoyed it more had I not been worried that Witney is going to be mad if Carlos makes a mistake. Carrie Ann hated it, of course.
Score: 31

Paula and Louis
Samba
Theme Song: Gilligan’s Island
Paula is miffed that she’s been cast as the millionaire’s wife instead of Mary Ann. Then she started crying because she is mentally and physically exhausted. Louis gives her permission to take a nap. Then he grabs other JV dancers to teach them the routine so Paula can stand in the middle as the rest of the crew act out an elaborate musical theater sequence of a shipwrecked Minnow. At dress rehearsal, Louis promises that he will never abandon Paula like everyone else in her life. The judges thought the storyline got away with them a little bit (you think?) but no one cared because the REAL Mary Ann was in the audience accidentally pulling focus. She’s still adorable.
Score: 20

Tamar and Val
Tango
Theme Song: Mad Men
Once again, Tamara challenges Val on his “In this dance, you seduce me at work” bit and tries to flip the scenario. Why can’t the boss be a woman with a male secretary? Val holds his ground with one very good point: because it’s the 60s! Tamar concedes and uses her long legs to seduce Val. It was a pretty good tango. I think Peggy Olson would be proud.

Bruno thought it was dirty — in a good way. Carrie Ann called Lift Police and the audience boo’d her. Julianne appreciated that Tamar showed her innocence. And Alfonso instructed her to allow Val to take her to the mirrorball trophy.
Score: 33

Alexa and Mark
Jazz
Theme Song: Breaking Bad
I’ll be honest: I don’t watch this show, therefore I am not emotionally invested in the characters. I work in the land of TV, so I do know the actual show. But I’m afraid that there are a ton of people out there who won’t appreciate what’s going on. As I typically am with Mark, I appreciate his effort to really go for something so bizarre. With that said, I rarely love what he does and am always puzzled by the judges’ glowing reactions. Then my butt clenched when Alfonso told Alexa that she and Carlos BOTH can not win this competition. She needs to focus on Mark and Mark alone. That made me sad. I love when the contestants show camaraderie and I think it’s sweet that her husband’s biggest fan is Alexa. I hope she doesn’t listen to him.
Score: 36

Andy and Allison
Quickstep
Theme Song: American Bandstand
Allison and Andy would like to remind you that Andy is still on tour. They travel the world trying to fit in rehearsals here and there when hey can. I could tell that Allison stuck to the basics with this routine, but there’s still something missing between this duo. Everyone sees it and I think the more it’s brought up, the more it freaks Allison and Andy out. Allison’s dress was hot pink and fabulous. So there’s that…
Score: 29

Anna and Gary
Tango
Theme Song: The Addams Family
This was Gary’s best dance to date. All he had to do was look menacing and stand there as Anna looked just as menacing while flicking her feet between his legs. It was slow, sharp, direct and focused. Gary had time to think about which direction to move. It gave Anna a break from pretending to be enjoying herself. Did we need to know that Gary wasn’t wearing any underwear? No. Did he need to tell the producer in the pre-package that his question was stupid? Absolutely not. But thanks to Kim’s illness, Gary will live to see another week and Anna gets to water down another bit of choreography. Hooray!
Score: 25

Alek and Lindsay
Tango
Theme Song: True Blood
Lindsay explains to Alek that the tango is all about passion. America has not seen his sexy side. It’s time to put it on display while wearing plastic fangs. Alek’s sweet face and adorable giggles don’t help matters, so Lindsay makes him practice by trolling for digits during rehearsal. She sends him to JV dancer Brittany first. He’s doing okay until Hayes comes in with his stupid half shell and turtle blocks Alek. He tries again with Karina and Emma. Then it’s JV dancer Jenna who asks HIM out and Alek accepts. This gives him enough confidence to twirl a scantily clad Lindsay around a smoking car and abandoned pay phone. He executes the Dirty Dancing drag and bites Lindsay at the end of the performance. Everyone goes nuts.
Score: 33

We interrupt this competition to bring you Kim and Tony’s dance performed by the possible love of Alek’s life Jenna and Tony. Jenna was Jeannie and Tony is her master. They samba their way across the floor, delighting everyone.

Bindi and Derek
Quickstep
Theme Song: The Jeffersons
Not only was Bindi’s foot on the fritz, but mid-way through the week, the producers call Derek to let them know that they did not receive clearance to use their original idea — The Jetsons. Derek switches one George for another and he starts choreographing to the theme for The Jeffersons. It wasn’t the best performance and seemed a bit bland. Even their costumes were unforgettable.
Score: 32

Nick and Sharna
Viennese Waltz
Theme Song: Downton Abbey
Sharna wants to portray Lady Mary dancing with Matthew. (Don’t we all Sharna?) Nick has trouble getting the steps and the emotions on the same page, but he pulls it together in the end. I had to suppress my natural instinct to mumble, “Oh Edith.” And we didn’t see a single person from downstairs. Alfonso continues to dole out the advice, encouraging Nick that “rehearsals are marathons” and that he needs to relax. Deep thoughts by Carlton.
Score: 36 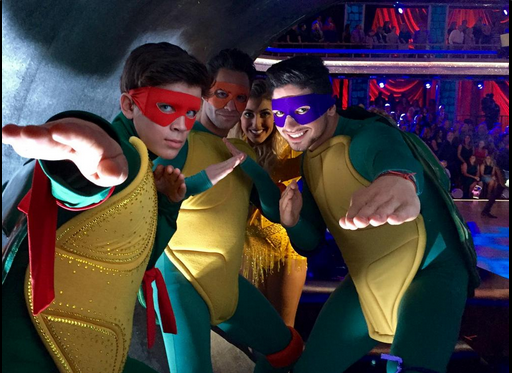 At the end of the night, Andy and Allison were in jeopardy along with Paula and Louis. But since Kim was let go earlier in the show, no one had to leave. I think Paula may have been disappointed that she had another week of practice instead of cooking biscuits and gravy in her kitchen.

Who were your favorites? Did you like the Breaking Bad number? Are you said that Bindi has a boyfriend? Will Jenna and Alek get married on the White House lawn? Sound off in the comments section!

Have you seen Bindi’s boyfriend? He’s just as adorable as she is.

As for the American Bandstand routine–that should have been a jive. I couldn’t get past that

I actually felt bad for Tony–not because he has a terrible partner, but because she thinks everyone loves her and would want her to have another chance. Uh no, Kim, that mini stroke was a warning. You have terrible habits (she smokes heavily) and this competition might kill you. Literally.

I really don’t like tv theme week because it is bad. Look at Bristol Palin’s season. And for the record, Lincee, her partner was MARK BALLAS. They danced to the theme from The Monkees. In gorilla suits. What I would really like to see is someone dancing to the theme from Hawaii 5-0!

There’s so much going on in TV theme week where I feel like they try too hard to make it work with the song they are given. It never really meshes.

I suppose the ‘injury’ rule doesn’t apply to the professionals? They certainly made allowances for Derek and Nastia!

Yes…I believe Tom specifically said “contestant” when he was reading the rules. And they can (and have) substitute other pros from time to time for various reasons including injuries and scheduling conflicts. I remember Derek doing some kind of show in NYC for a few weeks and another pro (Sasha?) took his place while he was out.

“Once again, Tamara challenges Val…” And once again, it rankled. If this is her real personality, heaven help any men trying to provide guidance in her life. And if her in-your-face attitude is just for the show, I’m thinking it will appeal to only a small slice of the viewing audience. I’m not looking for barely suppressed hostility when I’m watching DWTS. There are so many more engaging emotions.

She’s playing a role for sure. That’s her DWTS schtick. Don’t you think heartpursuer?

I hope for her sake you’re right, Lincee, but then again, what does that say about her strategic sense? I suppose there’s a faction of the audience who applauds her swagger, but I find it disrespectful and very off-putting.

By the way, how does one add a photo to one’s profile, or is that an option reserved for the site hostess? 🙂

Alfonso’s harsh critiques were driving me insane. He sounded knowledgeable but didn’t have the discretion to balance a helpful critique with brash observation.

I think he’s hunting for a full-time gig!