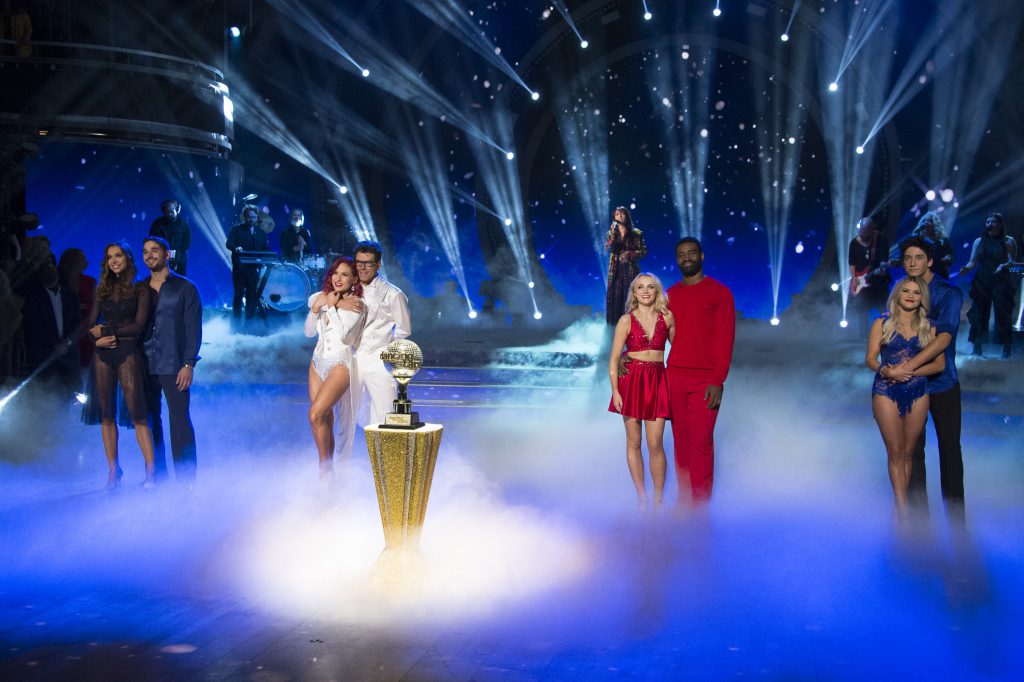 Well, here we are. Some of you are still in shock that Bobby Bones managed to win season 27 of Dancing with the Stars. These are the same folks who are still mad that Juan Pablo was kicked off two weeks ago. But reality has it home and the rumors are true:

Dancing with the Stars has officially crossed over to a full-blown popularity vote.

In twenty-seven seasons, there have been a handful of questionable dancers make the finals. Not one lifted the coveted Mirror Ball Trophy at the end, although many came close. I believe this is why Bobby Bones is under fire this morning. I also believe that’s why all the judges, Tom Bergeron, and ABC’s social media team kept reminding us that Bobby Bones is “America’s favorite” and that he “won the hearts of the viewers.”

It seems they want us to remember that he’s in the number one slot because we put him there.

Who cares if we think the system is broken. The question remains, does ABC think it’s broken and if so, will they do anything about it? Plus, what CAN they do about it?

I’m sure ABC is loving all of the attention, but they have to understand that true fans are mad. Even if they want to continue down the path of hiring stars with incredible fan power (verses eight count power), I think they still need to offer something to appease the barrage of viewers who have threatened to stop watching the show. There are too many to ignore.

My friend Amy, who has followed Bobby Bones for years, mentioned that there is a petition to change the voting algorithm. I’m not sure that is necessarily the best solution, but it is a start. She also told me that some want to implement a “safe card” that allows the judges to green light any contestant who may be in the red light of doom. It’s a free pass from elimination.

What I find interesting is that Amy garnered this information from Bobby Bones, which means he’s talking about it and concerned enough (or smart enough) to know this is a major topic among true DWTS fans.

It will be interesting to see how ABC responds in the next few days, as well as next season. Until then, let’s take a quick look at the highlights and lowlights from last night’s finale!

WATCH BEHIND A COUCH CUSHION

Should have been Milo or Ivanna. They were fantastic. And Juan Pablo should NOT have been eliminated last week before the finals. Bobby didn’t really dance in the finals as much as strut around throwing his arms in the air. I don’t even care about Alexis and Alan. Their supposed “love story” is bs. It took me a minute or two to figure out that those were actually Bachelor cast offs, and once again, Joe didn’t do much. This is worse than the first season–although I was really rooting for Kelly Monaco–she actually could dance by the end of the… Read more »

Oh Kevin, I always enjoy your perspective. I look forward to reading your reactions to the next Bachelor season.
And I wish Milo would have won. Oh well.

Kevin called it! Ugh. The results this season with Bobby taking home the Mirror Ball trophy were truly terrible. Although, I do have to say I enjoyed the “wild card”-ness of it all. You never knew what was happening each week!!!

Where to begin? The moment the show started last night I had a gut feeling Bobby was going to walk away with the mirror ball but kept hoping Milo would win. Yes, I saw Alan and Keo’s faces when the winner was announced. I think they were more shocked than Bobby and not in a good way. There have been other finals I didn’t agree with, Emmet Smith? Donny Osmond? At least they could dance just not as well as the runner up. Sharna and Hinch (race car driver) should have won, he was amazing but the deaf guy won… Read more »

I think Laurie won the year that James and Sharna were partners. Laurie is a doll and was obviously very deserving of the title, but James, as someone with zero dance experience, was incredible. I’d like to see him come back for an All-Stars show!

I said the same thing as Lara! She should have won with james hinchcliffe ! The best thing about Bobby winning is Sharna finally winning .

It IS nice to finally see Sharna get the recognition she so obviously deserves!

Oh all the comments above me: YES. JUST YES. Couldn’t agree more with everyone. Yes, Sharna should have won with Hitch for sure so maybe this is the world’s way of rectifying that (in a terrible way). Bobbie was entertaining. Winner he should not have been. This is my first season I haven’t voted; doubt it woulda mattered, but at least I could be legit angry because I voted. Milo or Evanna shoulda won. My heart was set on Milo winning. I didn’t like a final 4 for the trophy. It should have come down to the top 2. I… Read more »

Even though deep down I knew he was going to win, I think I’m still in shock. All I can think is what a farce this show has become and that makes me sad. I’m in the group that may boycott the show in the spring. The fact that Bobby Bones won makes a mockery of this show. Things need to change in a big way!

I’m still in shock!! I want a redo!! I completely agree with you! Things need to change! I feel like its mocking the hard work that Milo, Evanna & Juan Pablo put in. I am sure Bobby Bones worked really hard and did his absolute best and I am even ok with him even being in the finals but I am not ok with him winning. I really wanted Juan Pablo to win after I saw that Salsa he did with Cheryl. That might have been one of my favorite salsas of all time and they just looked like they… Read more »

I’m actually happy Bobby won. I would have also been happy to see Milo and Evanna win– and yes, they were obviously better dancers. But when it comes down to it, most of Bobby’s dances and packages were the ones I genuinely loved watching. Especially his freestyle. I know he wasn’t doing anything amazing, but Sharna choreographed something so perfect for him that I just smiled the entire time. I’m fine if they change the judges scores to count for more in the future, or give them one save but I’m genuinely happy for Bobby because I think he really… Read more »

This has been the most unsatisfying season of DWTS for me, and I’ve been a loyal fan since Day One. If what happened this season is the new norm for the show, then I’m OUT. I will have no interest in watching the show (even though I think the pro dancers are AWESOME!!) I was never charmed into jumping on the Bobby Bandwagon. I just wanted him GONE each week. I really wanted Milo to win (what an incredible young man!) or Evanna (she really came into her own over the course of the season). But when Bobby was announced… Read more »

I’ve been with Lincee (and others) all along: bogus romance to gin up publicity. Too bad. They’re kind of a cute couple.

As far as the outcome, my disappointment has settled into indifference. ABC broke faith with its dance fans, so I’m probably out. At least Bachelor in Paradise stays true to its calling. haha

Wasn’t it odd that Sharna and Bobby stepped away from each other when the announcement was made? Just an observation…

The judges were complicit in the outcome. They gave their mess of a freestyle a perfect score! Obviously they couldn’t see Bobby through all of Sharna’s chaotic choreography. I’m sure that was her intent.

After the mini season this past Spring and this season I think I can confidently say DWTS has officially jumped the shark. Very disappointing.

Milo should have won. It’s hard to believe he is only 17. What a star! Loved his freestyle.
The judges were way too generous with Bobby’s scores. That freestyle did not deserve 10s. It was entertaining, and Sharna did a great job considering what she had to work with, but Bobby didn’t really dance.
I thought Evanna’s freestyle was kinda weird.
I wanted to know who came in 2nd, 3rd and 4th, too.
I am ready for an all-star season. Bring back the mayor of Hinchtown! Juan Pablo deserves another chance too.

I wanted to know the order of finish for all the 4 contestants too. It was odd that they didn’t name 4th place and 3rd place finishers before getting down to the final two. That’s what they’ve always done in the past. After the results, I thought a lot about dancing vs entertainment. For me, the winner doesn’t have to be the best dancer, but needs to be a decent dancer along with being very entertaining. But as this is “DANCING” with the stars, I don’t think being a great entertainer is enough. I think you need to be fairly… Read more »

According to this article, Milo came in 2nd, Evanna came in 3rd, and Alexis came in 4th. https://www.tvinsider.com/732681/dwts-season-27-winner-bobby-bones-sharna-burgess-reaction/

I quit watching after Grocery Store Joe wasn’t eliminated by the third time. Instead, I just read Lincee’s recaps and then fast-forwarded my recordings to watch the dances she liked.

This was truly ridiculous. I agree with the ideas Lincee mentions in her recap: the Judges’ scores need to be given more weight and there needs to be a Judges’ save or free card, or something.

I probably won’t actually watch a season again. Too silly. I also think Bobby Bones is on something. He’s exhausting.

I was also really disappointed with how the show ended this season. I took a break during the season and didn’t watch much, but I decided to tune in to the finale. Based on the finale alone, I wanted Milo and Whitney to win. Their freestyle was amazing! Evanna was my runner up. I am not sure about Alexis and Alan’s relationship as I didn’t pay attention, but in general, those publicity stunts are see through. However, I did love when Kym Johnson and Robert Herjavec fell in love. You could see it! They have twins now, which I think… Read more »

Thank you for another great season of recaps and hilarity! I’m so impressed with the clips, observations, pop culture references, wit…this is a fantastic blog. SO glad I found it. I’m sorry Juan Pablo didn’t win, but this clearly helped his career…and he’s on tour now, so there’s that. (Also — he sings?? That man won the human race.)

Juan Pablo has truly been amazing this season!! I’m hoping that this experience will really help his career along-I’d like to see him in more stuff!