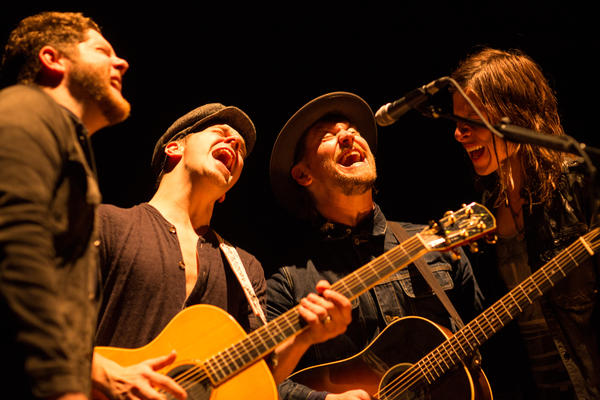 I’m one of those people who allows a song to take me on a journey. I’ve been on this planet for almost four decades, and there are a handful of bands and musicians who have permanent places in my heart because their music is the soundtrack of my life. These include the Annie soundtrack, Disco Mickey Mouse, New Kids on the Block, Michael Jackson, Bon Jovi, Reba McEntire, Garth Brooks (not Chris Gaines), Point of Grace, Michael Buble, Amos Lee, Mumford & Sons and the entire Kenny Rogers and Dolly Parton Christmas album.

And now there’s a new one to add to the list.

I remember hearing about NEEDTOBREATHE years ago. I enjoyed them for the most part, but I really didn’t pay attention to their work until they were featured on my beloved Hart of Dixie. You know a band is doing something right when their song is able to pull my focus from this handsome fella:

I have never whipped out Shazam on my phone as fast as I did that day. These lyrics flew over Wade Kinsella’s head and through my TV:

It was exactly what I needed to hear at that exact moment. The song is called “The Heart” and is my 2014 theme song. I dare you not to sing along when you hear it. May I also recommend “Multiplied,” “Wasteland” and “Difference Maker” from their Rivers in the Wasteland album.

Pay careful attention to the lyrics. They are deeper than you think.

You love Kenny and Dolly’s Christmas album too? Oh my I LOVE that album! Do you remember their tv special?
that was a journey too!

thank you so much for sharing!
God bless you Lincee.

I love, love, love NEEDTOBREATHE! I won tickets to their show at Warehouse Live a couple years ago and introduced more friends to them. Great band.

I’m a huge needtobreathe fan. At first listen this song seems like a rah-rah “I can do great things for God” kind of song. But I think it’s really about false prophets who exploit others in the name of God. Beware of anyone who claims to have special access to God or who gets exclusive messages from Him.

My daughter and I love this song. We sing it together in the car all the time. She loves to sing the backup whoos which is missing in this version but they are both great. Awesome band and song!!!

Girl! You know Needtobreathe is my FAVORITE all time band. And they put on one HECK of a live show. Rivers in the Wasteland is by far the best album I have ever heard. And the story behind it makes it even more special. Plus, they are good ole Southern boys!!!

I’m glad to hear you have finally discovered the magic of Needtobreathe. Their live shows do NOT disappoint, but make their music even more magical (I’m sure that’s all kind of grammatical madness but you get my drift). My husband and I got to start our marriage as husband and wife walking down the aisle to “The Heart” and into our new life.