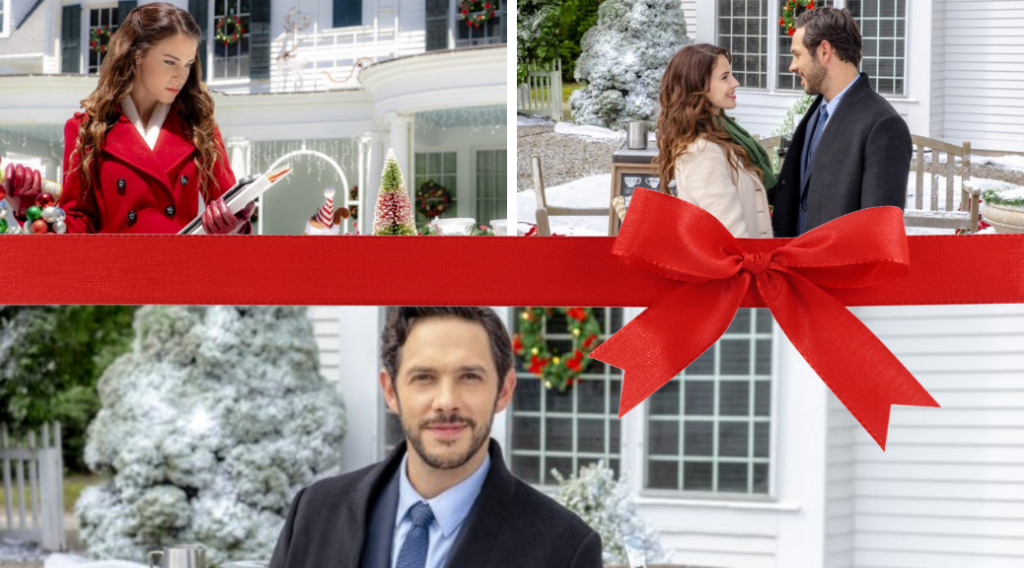 Straight out of the gate, Hallmark tries to woo us with character names taken from our beloved Pride and Prejudice — the root from which all romance movies have blossomed. Elizabeth Bennett is a party planner who loves white coats, green scarves, and matching project binders.

Her college friend George, who is the young handsome mayor of a quaint small town in Connecticut, has asked Elizabeth to come down and help with the Christmas festival. Although he’s not as much of a rascal as Austen’s Mr. Wickham, Georgey Boy does have an ulterior motive.

He likes Elizabeth! And his assistant Jane can totally tell. Elizabeth, of course, has no clue and babbles on about how George once asked her out by writing something in the front cover of a Jane Eyre novel. How darling. Then a dude named Travis cuts the line to get coffee in the outdoor kiosk by the courthouse. Elizabeth is irritated to learn that this kid, whose name should have been Charles, is getting coffee for his boss and thinks that it’s totally fine to disrespect others in line.

Elizabeth is not having it. She marches over to the vehicle they call a limo, but is clearly an SUV, and tells the man inside that he needs to calm down and get a little Christmas cheer.

The next day, all hell breaks loose. Can I say “hell” in a Hallmark Christmas movie review?

Anyway, the town gazebo falls into a sink hole thanks to a main water line break. QUEL DOMMAGE! What will the citizens of Lambton do? Where will they serve the coffee now and who will light the tree for heaven’s sake?

Elizabeth to the rescue. Of course they should use Pemberley Manor. She drove by it on the way into town and it’s perfect. It’s just like a Hallmark card (wink, wink, nudge, nudge)!

Sadly, the manor is set to be torn down and turned into dumb old condos. But that doesn’t stop Elizabeth from knocking on the front door and nearly swallowing her tongue when Darcy answers. He’s not interested, thankyouverymuch, and shuts the door. Elizabeth works her magic and “complains” to the people who will be purchasing the manor, assuring them that her aggravation will be assuaged if they just let the town put on the Christmas Festival at the manor.

Calm, cool, collected, and dressed totally in navy to prove he has zero Christmas spirit, Darcy offers to help Elizabeth, but only if she keeps his name out of the publicity. Then the billionaire gives her a few dozen Benjamins to purchase every candy cane, sparkly ornament, and roles of glittery wrapping paper this side of Hertfordshire.

When they return to Pemberley to set up Santa’s workshop in Darcy’s front yard, Elizabeth is shocked to learn that he doesn’t have a tree inside his home. Shouldn’t there be some sort of holiday cheer on every vertical surface? Elizabeth to the rescue again!

Thankfully, the caretaker of Pemberley Manor painstakingly preserved all seventy-five boxes of Balsam Hill decorations, even though no one has lived in the home for years. Elizabeth and Darcy enjoy a lovely montage of tree decorating, cookie frosting, sleigh riding, and general merriment. By the end of the two-minute rendition of “Joy to the World,” Darcy is in a red sweater. Mission accomplished.

Flames are further fanned with the official festival soloist gets the flu. Luckily, Elizabeth is a proficient singer and can bust out “O Holy Night’ with ease. Darcy finds this super attractive. So much so that he leaves his house to stand on the front porch to listen. They find each other after and exchange pleasantries.

A local reporter takes a picture of Elizabeth and Darcy shaking hands and it makes the paper. Elizabeth’s boss sees it and books the first flight into Lambton so she can hand hold the billionaire herself. She puts Elizabeth in the background (where she belongs) and takes over the entire event, replacing atrocious hay bales with silver tables and chairs like a civilized person. Oh, and her last name is Bingley of course.

Woe to Elizabeth. George sees his opportunity to strike while she’s vulnerable and asks her to dinner. Then he walks her back to the charming Lambton Inn located just downtown, east of the sink hole. He halfway professes his love and Elizabeth lets him down gently, as only a Hallmark Christmas movie leading lady can. She’s in love with Darcy. They hug it out and George goes about his merry way, glad that his friend has found true love.

An accurate reaction, don’t you think?

Across town, Christopher the caretaker, who looks amazingly like Santa Claus, encourages Darcy to go after Elizabeth. He can tell that she loves him! Also, she sent Santa a wish that she would find true love this Christmas season and he wants it to come true!

When Darcy rolls up to the inn, he sees George and Elizabeth in what he believes is a loving embrace. He decides right then and there that he will leave town because bah humbug.

The next morning, Elizabeth is concerned. The Christmas Festival extravaganza is being packed away and it’s the day before Christmas Eve. WHAT?! Caroline explains that the manor has been sold and the new owners don’t want the liability of all the people traipsing around a tree. PS: Darcy is gone.

George, Jane, and Elizabeth are determined to save Christmas. In a business detail that is too boring to explain, the team learns that the deal isn’t technically done until the board approves. That won’t happen for days. The festival is back on!

Darcy is at the airport with Travis, who has known him for five days, but he listens to his young squire when Travis explains that Elizabeth is in love with him and is determined to give the people of Lambton the festival they deserve. Darcy is all in, thanks to that thirty second speech.

But now he’s snowed in and he can’t get to Elizabeth to tell her he loves her. Christopher to the rescue! He just happened to be passing by in his sleigh and gives Darcy a ride. They leave Travis and the driver in the snow to freeze.

They finally arrive back at Pemberley. Darcy is able to step in to recite The Night Before Christmas when the local news anchorman’s wife goes into labor. It’s Elizabeth’s turn to swoon. Darcy makes his way over to her and they share a kiss in front of the manor door, all decked out with lights. Then they share ANOTHER one. TWO KISSES!

Okay I never knew how much I needed to see the Hallmark cinematic love child of Pride and Prejudice and Gilmore Girls. Sold!

My gosh I think you need to recap all Hallmark movies from now on! This was amazing and I can’t stop giggling!

Got to love those cheesy, predictable Hallmark movies! 🙂

I do love me a good Hallmark Christmas movie! However the background scenery in this movie drove me crazy! There were trees with green leaves covered in snow and you could tell where they stopped putting snow in the background. I did still enjoy the movie!

I agree, recap all of the hallmark movies! 🙂

I thouroughly enjoyed this movie 100%! Besides the ones with Candace Bure this one is my favorite. Actors had tons of chemistry and mayor George needs a sequel. Some parts just cracked me up with the cheesiness but I LOVED IT! The mansion was gorgeous! Note to autor, they refer to the suv as a towncar not a limo

I liked this charming movie, “Christmas at Pemberley Manor.”. Sure, it has all the Hallmark movie Christmas themes. If you watch Hallmark movies, you should know that! The Hallmark Channel movies are not trying to be “Citizen Kane,” “Rear Window,” “Forrest Gump,” “Hamlet,” or slavish adherence to “Pride & Prejudice”! True, there’s a formula most Hallmark Channel movies have adopted and “Christmas at Pemberley Manor” has done that with this movie. That is what Hallmark & Hallmark Movies & Mysteries promise their audiences.
Many of these reviewers are whiners. Michael Rady (who gains points for his facial hair – which makes him look more mature) & Jessica Lowndes (whose huge eyes bring out an exuberant quality that suits this movie) have a cozy chemistry. She is wonderfully perky & he is appropriately somber. Everything works out for the lead couple and for the assistant leads blossoming relationship. The snow/non-snow issue is a fair complaint. The prop masters & set decorators apparently do not understand the nature of snow.” A hint of Santa and/or magic? That’s a Hallmark tradition! I do get annoyed with the snowball fights, but I’ve come to feel that is a simple way to bring light-heartedness to even the most cynical Scrooge. Please note: snowball fights are the most violent aspects of the Christmas movies.

OK, since so many folks are asking for something new & different, I have a few suggestions for the Hallmark-haters to consider: “Christmas at Jurassic Park,” “Fast & Furious for Christmas,” “ET Brings Rudolph Home,” “Transformers Save Christmas,” “Star Wars: Episode 10, The Power of the Elves,” or “Pirates of the North Pole.”

I love watching Hallmark movies because they are not filled with violence, car chases, shootouts, sex, foul language, or bullying.

I have chosen to watch Hallmark’s Christmas movies since October. I’ve watched some of those movies two or three times! I can comfortably tune my TV to watch wholesome, family movies. Hallmark has not broken the promise they have made their audience.

You forgot to mention that “Mr. Darcy” is smoking hot Micheal Rady, and that he is flawless in this role. His mannerisms and facial expressions are fun to watch…this is a favorite!!