He finally got the monkey off his back

As many of you have emailed, tragedy has struck The Bachelor again with news of a Monkey/Matty breakup. 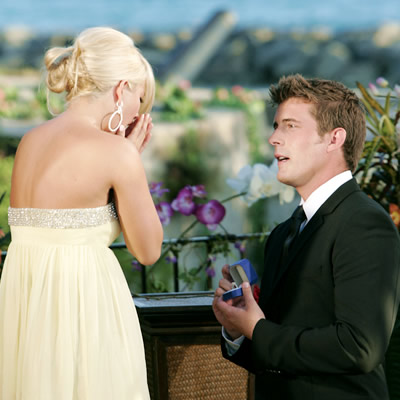 Lamas reportedly called off the relationship after the allegations surfaced, and insiders say Shayne is currently planning a trip to visit Weneger.

Grant presented his final rose and a marriage proposal to Lamas in May, which she accepted in the finale of the ABC reality dating series. Matt reportedly moved to L.A. to be closer to Shayne, an aspiring actress — and he is said to be heartbroken.”

He’s heartbroken, huh? Maybe I should plan a trip to the UK.

Nah. It’s easier to go down the road to Austin and eat sandwiches with Hotter than Crap Brad. That makes more sense economically. Because economics and logstics are the things that keep him from falling head over heels for me. Yeah…that’s it.

Big shock….as if didn’t all see the writing on the wall from the beginning….

I’m actually pretty surprised they made it as long as they did.

Lincee- your recaps are pretty much the only reason I keep watching this show! There are NO surprises anymore. This season’s big twist is both bachelors are at DDah’s house at the same time?! Big woop. Congrats to Monkey and British Boy for getting some publicity, free vacations and and ABC-furnished piece of bling. See you on the pages of US Weekly!

Nice…as if we didn’t see THIS one coming! Honestly, I’m surprised it lasted as long as it did!!!

Let’s be honest…from the way they were interacting with each other at the ATFR show we all knew something was up. And that was taped a few weeks ago. I guess it’s up to the bachelorettes to make it work…and so far there’s only been one who has.

Looks like they’re really pushing for Jason to be the next bachelor…would even tape the show in Seattle apparently. Should be interesting to see if that pans out.

Of course… who didn’t see this coming… It is good to know I was right thinking she was slimey and conniving on the show, though. Don’t you just love to be right!?

Definitely saw this one coming on the ATFR show…did you notice how upset Matt seemed to be? And Shayne’s comments about her being able to go out with ‘friends’ and not be a big deal seemed a little far fetched. Matt should have known something was up in Las Vegas when Shayne threw her infamous tantrum. Move On, Matt, move on.

Did anyone else see that Chelsea is now dating Jeremy from DD’s season? What an odd couple. I guess they met at the men tell all show when they were all hanging out together. He confirmed it in some article a week or two ago.

HA! Oh, I mean Awwww…but seriously, your title cracks me up.

Here’s the link to the article about Chelsea and Jeremy. Just down past the first section.

I’m a little sad to hear this. They did seem like the odd couple, but I really liked both of them, and I thought they were kind of charming together. Poor Matty. With his handsome face and that accent, he’ll have the ladies lining up in no time!

I didn’t watch the Matt Monkey season, except for the finale. Glad I did not waste my time.

I am a big fan of Jesse and Deanna even though the general consensus seems to be that they won’t make it. The Ohio papers ran a story that they were in Cedar Point OH (home of 16 plus roller coasters) and had a tiff about riding one of them. (She bailed at the last minute). All I can say is, if it was the Millennium Force, I do not blame her. Cedar Point is a blast, with lots of fun coasters, but not that one. It has a super high, almost vertical drop. I hope people give the girl a break.

Matt should really thank her for sparing him all of the future plastic surgery bills and recovery periods…like mother, like daughter!