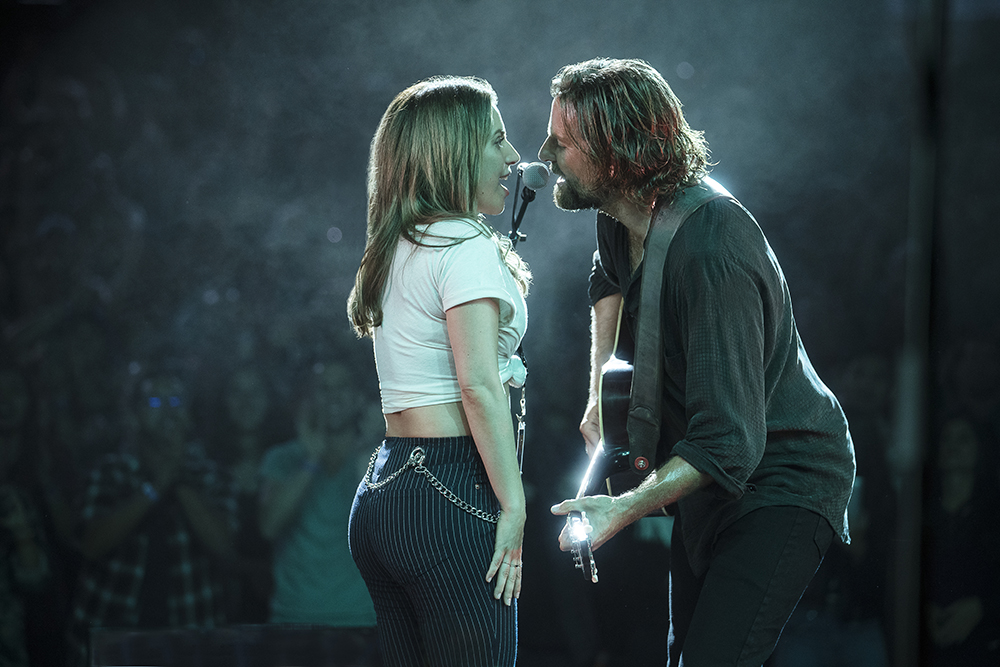 The Gist: Greasy haired pretty boy musician takes a liking to newbie singer with a wicked set of pipes.

Survey Says:
Hey, if music and drama is your thing, you need to experience this movie in a theater. The subject matter is weighty, but it’s worth the heaviness. Cooper sucks you in with his brooding personality. Gaga sucks you in when she opens her mouth to sing. People will be talking about this film for weeks and you’ll want to have an opinion at the water cooler.

Can’t win to see it! We tried to watch the Judy Garland version but it was all weird and would have still photos every once in a while. Didn’t see what the fuss was with Barbara’s version although…her voice is amazing.

I agree with everything you said! Both Lady Gaga and Bradley Cooper (and his electric blue eyes) were phenomenal. I didn’t cry either, but did have a lump in my throat. My friend that I saw it with cried quite a bit. I was wondering if there was something wrong with me, so I’m glad to hear you didn’t cry either. I had actually never seen any of the previous versions, so I didn’t know what was coming. Such a good movie!

I CAN’T BELIEVE YOU DIDN’T CRY. If I lived in Texas I would say I might have been the person sitting behind you hyperventilating. So so good.

I loved this movie! I never pay to see a movie twice, but I’m ready to see it again this weekend. Bradley Cooper and Lady Gaga were mesmerizing as was the music. I did cry and l probably will each time I watch it.

Just FYI, the soundtrack is on Spotify, too!

I agree about the hair–not a fan of greasy hair, but I’d still hit that for sure. Of course Gaga’s singing was the bomb, but I was surprised at how much I liked Bradley’s songs too. I didn’t cry either, but I’ve seen the other versions, so I was expecting it to be sad. I enjoyed it, a lot.

Substance abuse is terrible…but I also realized how devastating our words to another can be. That’s what I took away from the movie. Words (spoken and un) led to giving up on dreams, alcoholism, fractured family relationships and even suicide. Powerful reminder to always think before speaking…

I ENJOYED THE MOVIE AND I CRIED…
I cried like a BIG Headed BABY.. I had never seen any previous A Star is Born movies, I was drawn by the previews. I am not even a Lady GaGa fan. All I know about her was her meat outfit. But I saw a preview at the movies months ago, and I said Is that Bradley Cooper singing… Then I was like WOW!

Overall the movie made me laugh, made me cry, and made me think… I really enjoyed the music. I listened to the soundtrack and it made me cry all over again, a little less than in the movie. But still I was crying. The song “I’ll never Love again” was so powerful, especially the version with Bradley Cooper singing in it.

Certainly lots of Oscars to win with this movie, Best Director, Best Original Song (Shallow, or I’ll never Love again) and best costume for the change in Ally’s character from the drag club performance to the SNL performance. I bet she can walk around town with no make up and nobody recognizes her.

The story was so compelling. I’ve never had a whirlwind relationship before.. BUT I did wonder if there would have been a different outcome if she would have told him she loved him.

I want to watch this but my wife claims that Lady Gaga is “a disgrace to humanity.” This is a minor point of disagreement in our marriage. I think Gaga is awesome, especially after she CRUSHED the National Anthem at the Super Bowl. Only Whitney Houston did that better. Anyhow, I am glad Lincee liked it. Her taste in pop culture is impeccable – that is the entire premise of this blog! Love ya, cuz.

I was not a Lady Gaga fan but most certainly am now. She was incredible. Bradley’s singing was good too. I loved this movie that made me laugh, ugly cry & think.