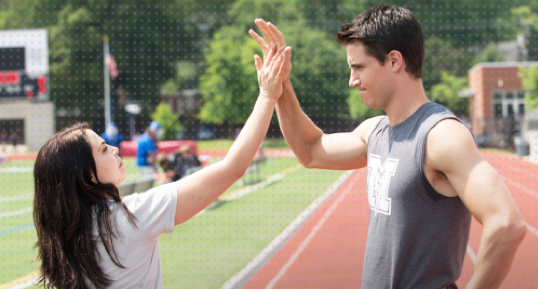 The Gist:
Bianca (Whitman) is used to the entire high school swooning over her two best friends. It isn’t until her obnoxiously cute neighbor Wesley Rush tells her that she is the Designated Ugly Fat Friend (DUFF) that things begin to unravel around her. Since Wesley is a well-known womanizer on campus, she enlists his help to de-DUFF her, so she can land the uber cool guitar-playing guy who could easily be an extra on Glee.

Survey Says
Watch it on a plane to Toledo or rent it on Redbox.

I’ll just wait to rent this one, but also wanted to say that it looks like “She’s All That” for this generation. I also just looked up the year when “She’s All That” came out and it turns out that it was in 1999 when I was a junior in college. That movie could be going for its driver’s license this year. I feel so old!

You are so right! It does seem like a “She’s All That” of this generation. But ours was SO MUCH BETTER!

Thanks for the warning about the differences between the book and movie. I will definitely wait for Redbox. I really liked the book and could not believe it when I saw the author was only 17 when she wrote it.

P.S. My sister turned me on to your blog for the Bachelor/Bachelorette recaps. I am happy I stuck around for the rest. 🙂

Thanks so much Melissa! I appreciate it!

Am I the ONLY one who thinks that she is neither U nor F? I mean, she is adorable!!! It strikes me as weird that they put pretty girls in these ugly duckling roles. Hollywood is weird!!

Totally Natalia. Thank you for saying that. I agree completely.

I hate that this is called DUFF… do we really need another mean word to call girls who aren’t perfect looking? Plus, she isn’t anything close to ugly or fat. I hate that this is what we tell our kids…. this cute girl who maybe wears a size 4 instead of a 0 is “fat”? Thanks Hollywood.

Exactly. The good news is that by the end of the movie, everyone embraced their DUFF-ness…

I saw this movie. I fully agree with your recap, I wanted it to be better than it was but alas it was just ok. I also realized that I am so not the target market for this film and I am old as dirt. But hey, Wesley was pretty hot (that is if he is over 18, I don’t want to be creepy or anything!)

I took my 30 yr old daughter and 14 yr old grand daughter. We loved the movie. I was busting a gut at some of the things “Wesley” said. Both girls said that the mom reminded them of me when she did the duck face!

This article offers clear idea in favor of the new visitors of blogging, that truly how to do blogging.