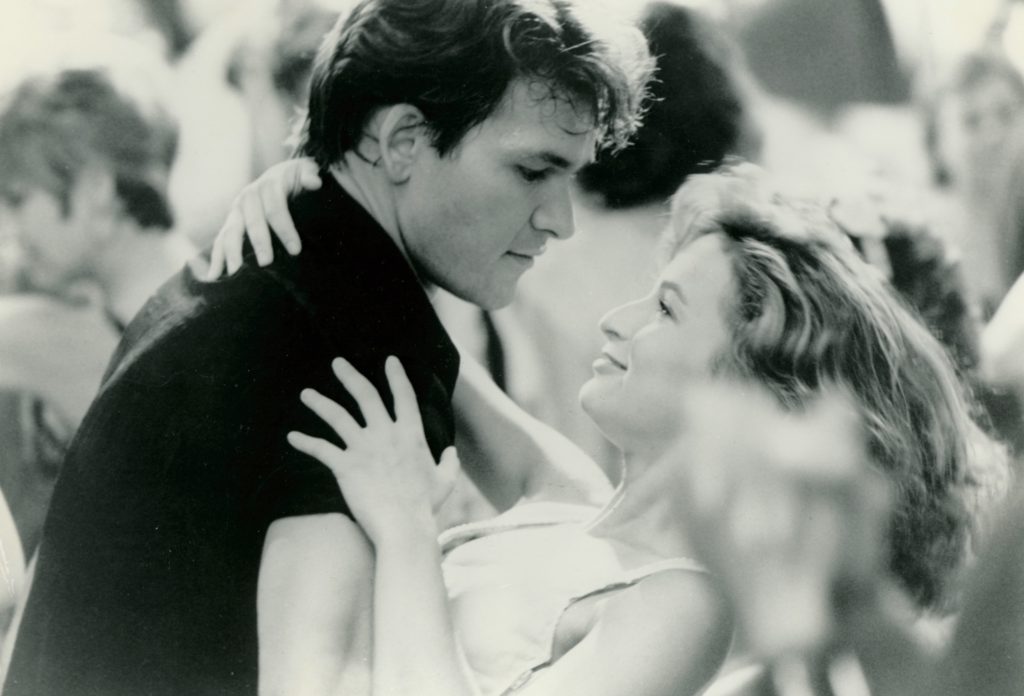 I was 12-years-old when Dirty Dancing debuted. It was perfect timing due to the fact that I had recently announced to my family that I was going to either dance on Broadway or be a Dallas Cowboy Cheerleader when I grew up. I was infatuated with MGM musicals, going to the theater and the Mickey Mouse Club on the Disney Channel.

Clearly, Mama saw the word “dirty” in the title of this movie I HAD TO SEE and decided it was not fit for a young girl.

Annoyingly, my older sister saw the movie about fifty-eight times and would come home and tell me about the music, the moves, and the beauty of Patrick Swayze. Little did she know that Tiffany Tutt’s birthday party was that weekend and we watched the entire thing four times on BETA.

I have to tell you, I was hooked. It was a pivotal movie for me. Sure, there was a ton of sexual related stuff, but I only saw the dancing and heard the music. I would try to figure out ways to sit in a corner, longing for a tall, handsome fella in a leather bomber jacket to come and proclaim that nobody puts me in a corner.

Who didn’t do that?

For years, I mean YEARS, my sister and I couldn’t figure out how Johnny responded to him. It was awful, because we had the dialog from the entire movie memorized except for that part. I think it wasn’t until the Internet took over our lives that we were able to Ask Jeeves (before Google) what he said. And it was a glorious day when we found out:

“You just put your pickle on everybody’s plate college boy and leave the hard stuff to me.”

I loved when Penny and Johnny danced. I loved when Johnny bit his lower lip and gave Baby the “come here” gesture with his finger when they first met after she carried a watermelon. Then he proceeds to lovingly teach her how to dirty dance. I love the entire “Hungry Eyes” montage.

I owned two VHS tapes of the movie. I own the DVD. I own the soundtracks, including, More Dirty Dancing. I performed the move that Johnny executes down the center aisle with the other instructors in a high school pep rally number. I fell in love with the mambo. And I saw the 30th anniversary screening last month on the big screen.

My sister was right. There’s nothing like Johnny Castle 22 feet up in the air.

Spot on, Lincee. I can watch this movie anytime anywhere. Also, I really wanted to go to Kellerman’s after DD. Thanks for the fun memories!

I had to sneak and watch it at a slumber party too! My mother thought it was too risque. I also had the Dirty Dancing AND More Dirty Dancing soundtracks on tape. I will not ever see the new version of this or another classic ‘Footloose”. There is no need. Nothing can top the wonderment of Patrick Swayze and Kevin Bacon.

My sisters and I still quote the movie but the quotes we say the most are really obscure:

“I Feel Pretty…or What do the Simple Folk Do? Or I Feel Pretty” is one of them. The other is ‘I Think she gets this from me”.

I had the Dirty Dancing soundtrack on tape and would listen to it every night to go to sleep. And if one side finished before I was asleep I would get up and turn it over.

And I never had trouble with the pickle line. The one that I could NEVER figure out was when Robby said, ” You know if tips keep up I’ll have enough for my Alfa Romeo”. I still say that in my head sometimes. Ridiculous, I know.

My mom took me to the movies to see it, I’m the same age as you! We went with my best friend and her mom. Then my best friend moved and every time we went to visit for YEARS after that, our moms would watch it over and over, and rewind some of those pelvic thrusting parts. Somehow I was not completely traumatized and still love it too!!

You covered all of my favorite parts!

Kellerman’s anthem is also my college alma mater’s tune, which can get confusing. I find myself singing both, and quote the beige iridescent lipstick quote on the reg. Thanks for the stroll down memory lane!

Kellerman’s Anthem is on the first soundtrack, I thought?

Yes to all of this. I had both soundtracks memorized and choreographed dances to them. I even managed to do a book report dance to “Do You Love Me.” I was in 4th grade when it came out and remember rewinding and pausing the part where Johnny gets out of the bed with Baby with my sleepover friends. We were convinced we could see his penis. Oh what a skin-colored blur did for us. Great post,

The summer between my sophomore and junior year, I watched this movie every single day of my break. Literally EVERY. SINGLE. DAY. I’ve gone on to watch it a couple hundred times since, easily. Used to listen to the soundtrack on my Sony Walkman while riding the bus to school. Was obsessed with having Baby’s hair and every single outfit she wore. I recite many of the lines subconsciously, much to my moms amusement, the favorite being “Me? I’m scared of EVERYTHING. I’m scared of what I saw, of what I did, of who I am. And…most of all, I’m scared of walking out of this room and never feeling the rest of my whole life the way I feel when I’m with you.” (And yes, I just typed that out…not copy and paste!) the scene that follows with the little swoop of the hand around Johnny’s butt?! HELLO!!! I did watch an anniversary release though I can’t remember, maybe 20 years? Proceeded to get in an accident on the way home from the theater. Then hang time in the back of the ambulance was worth it! So much I could say about this movie. It’s my all-time favorite that I never grow tired of watching!!

“Cry to Me” should be on that song list! Been in love with Swayze since 1st grade when I was inexplicably allowed to watch this movie.

Love that photo! And the music. And Patrick Swayze. Funny I can remember the first time I heard about this movie (high school library) but cannot place where or how I first saw it. I’m sure my Mom would have like you mentioned seen the word “dirty” and said “nobody puts my baby in a theater with that movie”. My next favorite line (right after “I carried a watermelon”… ha ha) “you probably have a great room” and her response “this is a great room” (of course she would say that to any room he was in at that moment). Also like your “lessons” :-).

This is a “go to” movie for my daughter and I, along with Titanic, Ever After, and several Disney movies! ❤️

Such a great movie. So funny I was just thinking about it. I was probably in 5th grade when it came out. My mom was older–she had me when she was 42. In that sexy dance scene where Baby is carrying the watermelon– my mom said “Yeah that’s how we all danced. We called it the Dirty Bop”. I was like, Mom!!?!?! So funny.

I grew up in Houston and actually took a dance class from Patsy Swayze, Patrick’s mom. She was a well known dance teacher. He never showed up around the studio (sigh). He grew up dancing because of his mom.

And Penny is way too skinny lol.

Lincee, I love your posts. We had parallel childhoods in Texas with drill team and all that!