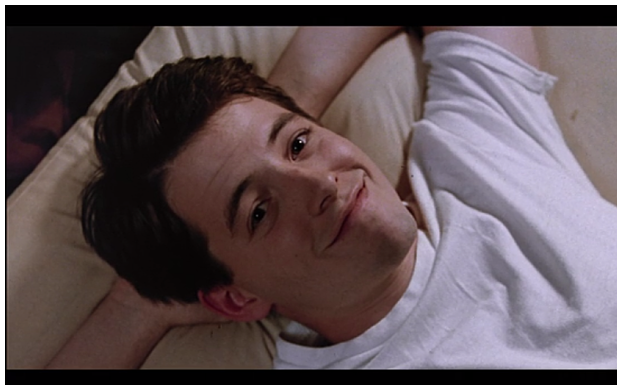 Four months ago we celebrated Pretty in Pink’s 30th anniversary and now it’s Ferris Bueller’s Day Off’s turn. Once again, my friend Stephanie rallied the troops so we could all enjoy one of our favorite flicks at an actual movie theater. Look! There’s Abe Froman on the big screen! It was glorious. It also proves that 1986 was a stellar year.

Even though I once had a legitimate crush on Ferris, I always wrestled with the fact that he was ditching school. As a strict rule follower, I never could embrace the day off as fully as the characters in our story. Every time our trio almost got caught by Mr. Bueller or Mr. Rooney, I developed heartburn. But I pressed on for several reasons:

I love a parade.

“Gummy bear? They’ve been in my pocket. They’re real warm and soft.” OMG! That’s my favorite line to recite and no one every gets it. Thank you for getting it!!!

I just said this one the other day!

I heard the secretary’s voice when I read “They think he’s a righteous dude.” Another classic quote is “Do you have a kiss for daddy?” (“So that’s how it is in their family”.) Hahahaha. Thanks for sharing. I usually only read your Bachelor/ette posts but I’ll keep an eye out for other good stuff.

Whenever my husband or I hear the word “nine”, we have to follow it with, “NINE TIMES”…and another line is “GRACE!” Unfortunately for me, this movie only legitimized the necessity of ditching school…but that was a long time ago. 🙂