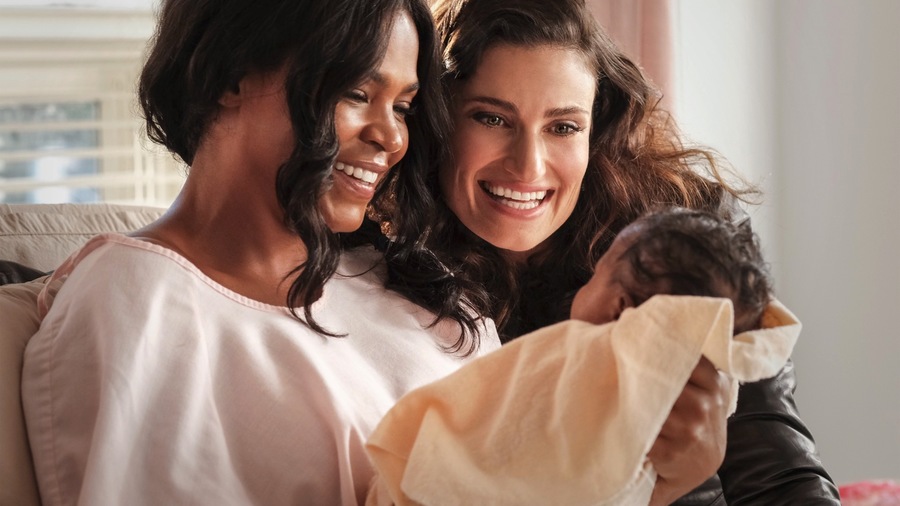 5 times the Lifetime Beaches movie made me laugh or cry

I felt a touch of heartburn when my friend Emily asked me if I was going to watch the Lifetime Beaches movie. I typically fall into the camp of shaking my fist while shouting, “WHY ARE YOU TRYING TO REMAKE A CLASSIC THAT EVERYONE LOVES, HOLLYWOOD? LIGHTNING WILL NOT STRIKE TWICE!”

These feelings that bubble up call for all caps.

With that said, the news of an upcoming Lifetime Beaches movie was a flickering flame of irritation. Unlike the time L.A. execs who decided it would be a good idea to remake Footloose into a big screen movie, (Julianne Hough is taking over the world, people. Watch out.) the simple fact that this was a Lifetime reboot calmed my nerves. I placed it squarely in the Hallmark Movie Channel category and happily set my DVR to record.

I was mentally prepared going in that nothing would ever compare to the original Beaches.

I applaud Idina Menzel (CC) and Nia Long (Hilary) for giving it their all. And I applaud the writers and director for finding new and interesting ways to make me laugh and cry at a movie that debuted twenty-nine years ago.

What’s His Face
There’s a running joke throughout the movie where CC nicknames Hillary’s boyfriend (and future husband), What’s His Face. It was a nice through line that tied a rushed backstory together. During a series of emails (no snail mail!) CC asks about What’s His Face and Hillary asks about CC’s stagnant career. It’s a good day when CC meets John Pearce at a bar mitzvah (not as a singing bunny rabbit) and books her first gig.

I’m going to work “I booked a gig” into my everyday vernacular. I think I’ll sound cooler, don’t you?

Her mother’s hands
Hillary’s divorce and pregnancy announcement come fast. Victoria’s birth is two minutes long. The next thing you know, “Tori” is a little girl playing at the beach house and her sick mom recruits crazy Aunt CC to spend the summer with them. Nia nailed the “mother’s hands” performance. I cried like a baby. Nia’s tears were real. My tears were real. We felt all the feels.

“Not all strength is loud.”
What a brilliant piece of dialog. Hillary puts CC in her place when she gently reminds her friend that she will be making all her own medical decisions. CC will not be buying her a new heart. She is not going to spend her last days in a hospital. Hillary will fight her terminal condition gracefully. CC can join her or watch from afar. Either way, this is happening. Things got a little snotty on my end.

Glory of Love
“Glory of Love” and “Wind Beneath My Wings” were the only two songs repeated from the original soundtrack. Although I didn’t immediately delight in Idina’s version of “Wind Beneath My Wings,” I straight out balled when Hillary DIES IN HER ARMS while the song plays. This moment is followed by Tori and CC scattering Hillary’s ashes. Someone hand me a Kleenex.

In the Bette Midler version, we see CC standing beside her best friend’s tombstone. She takes a moment, collects herself, and then walks over to Victoria. She takes the little girl’s hand to lead her away from a very sad day. There was a strength in that scene that I admired compared to Idina and Tori looking peaceful and ready to take on the world. It was a different approach. Both were impactful.

I’m glad Idina kept the good-bye wave at the end of “Glory of Love.” I’m also glad they kept the part where CC tells Tori about the first day she met her mom. We did get a flashback to the girls in the photo booth, but I didn’t feel the pull of the original little girls, probably because we didn’t get as much of a history with the Lifetime version.

That didn’t keep me from crying all the same.

Did you watch? What did you think? Was it everything you thought it would be? Can you fly higher than an eagle now?

hmmm. I’ve been wondering if this is worth seeing. I love Bette Midler in the original so much when I was a kid…. come to think of it… It’s possible I was a little young to be mimicking CC’s rendition of Wind Beneath My Wings in my bedroom. Ahh the 80s.

I watched with my teenage daughters. They gave it a “meh” and compared it to the movies that are shown on the Disney channel, but just a little more grown up. I wanted to cry, but every time, there would be a moment, another commercial would come on! The last hour of the movie was like 20 minutes of movie and 40 minutes of commercials. Hard to feel all the feels when you keep getting interrupted by KY Jelly ads. 🙂

welllll, I’m not sure how I felt about this new movie, I kind of felt like it was too rushed, I wanted to cry, but didn’t, I kept comparing it to the original. I did love the banter between cc and hillary, I think they had great chemisty, but I just didn’t feel as invested in their characters as much. It was OK, but not as good as I thought or wished it would be.

is there going to be another beaches?
this movie is so awesome

I didn’t make it even halfway through, my disappointment was so great. Instead, I put the original on and delighted in THE REAL THING. This movie just CANNOT be remade. Bette and Barbara, Miyam and Marcie and even Grace had off the charts chemistry that made this a non-starter from the get go! Better luck next time. This one was a bad apple.

I started crying when she said you are always tired Mommy. Knowing what is coming doesn’t make it easier.