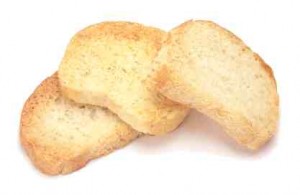 That’s what I think the next installment (lucky 13) of the Bachelor will be with Jason as our fearless leader. Melba toast. And I’m not talking about the seasoned kind you find in Gardetto’s either. I mean the melba toast that my Mimi eats with tuna fish.

It’s not that I didn’t like Jason. He was alright. He had a few annoying habits, like bouncing on the balls of his feet when DD was in a three mile radius. But for the most part he was an okay guy. He was borderline “needy,” but I do believe he wanted to be married. Probably for his kid’s sake more than anything. And I’m not worried about Ty being forced in the spotlight. I’m sure there’s already a contract in the works for the Spring launch at Baby Gap. Ty’s going to be just fine.

I just think Jason is going to be boring. And let’s hope he doesn’t full-out chach on us with tokens of affection for every girl he takes on a one-on-one date. I can see it now: a homemade frame with twigs glued on the outside representing their picnic in the woods; shells that he made into earrings from when they went horseback riding on the beach; a mix CD that includes theme songs such as, “Fly Me to the Moon,” and “Blue Skies” symbolizing a hot air balloon ride over Seattle.

I’m sure ABC will try and throw him a bone with some normal girls, but you know they are going to do their best to bring on the crazies. And let’s hope he has to sign a contract that says he will keep the ones that have escaped from the asylum for at least four weeks. We have to get some drama from somewhere.

I have to agree with all the IHGB posters that ABC should have picked a new face. This jilted altar thing is getting old. However, I felt the exact same way when I learned that DD was going to be the next Bachelorette, and look how great this season turned out to be!

I’d be willing to bet that the following will occur:
1. There will be two single mothers that can relate to Jason’s life

2. Some sort of reference to Sleepless in Seattle

3. Our Host Chris Harrison will constantly remind us that Jason’s proposal was REJECTED and that ABC had to help a brother out because HUNDREDS of you wrote in to say you would marry Jason

4. There will be gifts for Ty, including but not limited to: golf balls, ducks, teddy bears, Space Needles, Hannah Montana pillow cases and a board game that recalls the life of Jason (as described on Wikipedia) so Ty won’t forget his Daddy while he is in the Grand Bahamas.

Of course, Ty will only be able to play this board game between Baby Gap photo shoots.

So what do you think? Melba toast Mimi or Gardetto style? What moments do you predict will happen this season? Discuss below and let the countdown begin!

Melba Toast Mimi….Sounds like a sooze-fest to me – come on ABC… You have a sea full of hotties like Travis that we would love for their eye candy factor and you go with wimpy little man Jason? What gives?

hahahah, i love the sleepless in seattle reference. I think it will be during the “opening ceremonies” (sorry, too soon after the olympics). Jason meets single mom #1 and her quote is, “And all I could say…..was Hello” muuaahahaha

i do heart jason. I hope he’ll surprise us with a more than G rated season. Can we request that OHCH brings Drunk Amber back? Jason seems like he’s be an Olive Garden guy!

I’m sure I’ll watch… but I have a feeling it will be a major snoozefest. Jason seems like a nice guy, but I want to watch a smokin’ hot bachelor. And Jason is too silly to be smokin’ hot! I wanted Jeremy… wah.

Will obviously get sucked in this season…and will wonder why the crap it happens every time! 😉 I will be optimistic and vote Gardetto style.

He’s obviously “marriage material” because he has been married before, so there’s that…

The girls are always crazy, so it will be entertaining. Which makes me wish they had chosen someone that I wouldn’t mind seeing embroiled in insanity. I want more than that for Jason and Ty.

Plus, now that I’m married…it’s pushing it to get my husband to watch THE BACHELOR. I still have IHGB, no matter what!

Pretty sure it’ll be an interesting season – only because of the crazies it’s bound to bring out! Hopefully there will be some normal girls, but that’ll probably mean the first episodes will be awesome, then it’ll get supremely boring.

Here’s hoping its Gardetto or at least Melba toast w/ jam. I think Jason is a genuine guy and I hope he finds a nice girl. Perhaps watching too many Jane Austen movies lately have left me a hopeless romantic but I’d like to see it work out for him. Plus I’m excited with the idea that it may be filmed in Seattle!

I’ll be the odd chick out and just say I was THRILLED Jason was picked to be the next Bachelor. In my opinion, they could not have picked anyone any better. He is charming, genuine, caring, handsome, intelligent. He may not be the “typical Bachelor”, but look at what losers the “typical Bachlors” have turned out to be in the past. I’m WAY excited about this season!

I predict bouncing…lots and lots of bouncing. And even worse than the bouncing – that way he would grab DD’s face every single time he kissed her. I swear I have to breath into a paper bag when I think about it. The claustrophobia! It’s closing in on me!

This season will manage to completely whip us and be entertaining at the same time. It will mostly be a whip, but between your excellent posts and the total nut-jobs they will have on the show there will be some nuggets.

I agree with AJ. I love Jason, and I’m glad he’s getting another chance. I do hope he doesn’t end up totally screwed by one of the nutjobs ABC will bring on the show though.

P.S. I heart Melba toast of any variety 🙂

AJ #8 I am completely on board with you girl. Jason is as cute as a button and he’ll be a breath of fresh air amongst the past bachelors. I believe he’s trying to fall in love and I actually am hopeful it might work out if he finds someone he clicks with!

I’m hoping for Melba toast Gardetto style. I really liked Jason and was bummed when Deanna didn’t choose him. He seemed sincere, but then how sincere can you be when you are on a reality tv show and have cameras in your face all the time. I’m really looking forward to your interpretations of the show again. They always bring a smile to my face. =)

I’m thinking Mimi Melba Toast, after someone spills water on it and it gets all soggy. I can’t imagine anything worse than soggy old melba toast for a whole season. EGAD!!

You see, Jason is a rare breed. He is cute on the outside and dopey/dweeby on the inside. You would see him from afar and expect confident and sexy, but his inner geek oozes out (like his little hoplets of happiness, or his Mr. Potato Head expressions). Poor baby.

But, finding his match might make good TV. Remember that cute screwball who made the orange po-dunk teeth for McSteamy? She was geeky but cute. Maybe he’ll meet the female version of himself.