You know how some people keep the corks from their wine bottles in a fancy bowl or huge jar in their kitchen?

What I do keep are ticket stubs from when I go to the movies.  I even have a handy little book specifically made for said ticket stubs.  I just added my latest entry from my Thursday movie screening LIFE AS WE KNOW IT. 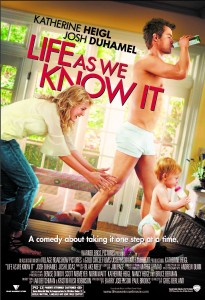 Did you miss out on Thursday?  Never fear!  I’m hosting another one TONIGHT!  Click HERE if you are in Houston and want to go see the adorable Josh Duhamel play with a darling baby girl for an hour and a half.  It’s worth it!

So.   Back to my movie stubs.  I was shoving my ticket into it’s protective sleeve when I decided to count how many movies I’ve seen so far in 2010.  That number is a respectable 26.

I tell you dear reader…none have blown me away.   It’s about time someone polished up the silver screen because it’s been a “meh” year for this movie-goer.

Every year, I write a Thanksgiving letter to friends and family and tell them what I’m thankful for instead of sending a holiday card.   The back of that letter consists of a collage of photos, clip art and pictures of things that helped shape me into the Lincee you all know and love.

This year, among the snapshots of me with Cord McCoy and Ronnie Milsap, I will (as tradition) include the three best movies of 2010.  Unfortunately, there is nothing that stands out as significant front runner.  If you held a gun to my head and made me choose this second, I would have to go with “It’s Complicated,” “Date Night” and “Kick Ass.”

1.  I don’t own any of the movies.  That’s how I know a movie is Thanksgiving letter worthy.  If there is a countdown to the DVD release on my calendar, then it will more than likely make an appearance between the pictorial representation of the three best TV shows on my DVR and favorite live music concert scanned stubs.  “It’s Complicated” had funny parts, but you won’t find it between “Incredibles” and “Knight’s Tale” in my alphabetized DVD collection.

2.  I Netflixed “Date Night” and I didn’t laugh hysterically, rolling on the floor in front of my couch, as I did in the movie theater earlier this year.  It’s probably due to the fact that I had a daiquiri before seeing it the first time.  And anyone over the legal drinking age knows that rum makes everything funnier than it really is.  Oh…and it makes your arms heavy too.

3.  My Mimi gets my Thanksgiving letter.  I might send her spry 93-year-old self into an early grave if she sees the words “Kick Ass” on the page.  I treasure her too much to take that chance.

I know what you’re thinking: “Lincee.   For the love of all things Taylor Lautner, what about “Eclipse?”

I know.  I KNOW!  I just can’t put it down as a favorite.   I will forever be Team Jacob and probably include some sort of homage to my favorite wolf, but the letter is sacred and will go down as a time capsule portraying my adventurous life on this planet.  Anthropologists decades from now will need to know that I took my movies seriously.

Plus, have you seen the werewolf on Vampire Diaries?  He’s my age.  Someone might be taking a back seat until “Breaking Dawn” comes out.  I’m just sayin’.

I have to be honest with myself.  When it comes down to it, we all know what will be the rising star this year.

The Deathly Hallows movie poster will reside alone, next to a playbill for Wicked, one of those dancing iPod people, 2 Timothy 1:7 and my new IHGB logo.

All of which I am thankful for.

Was there an awesome movie that came out this year that I have missed?  Was I supposed to feel like Tim Burton was tripped out on whatever the caterpillar was smoking as I watched Alice in Wonderland?   If so…not so list-worthy.  Is it sad that I couldn’t remember what The Switch was about and then felt bad when I Googled it because I love Jason Bateman so much? What do you guys think?

The A-Team!!! If I wrote a Thanksgiving letter.. that movie would definitely be included, along with HP7(a) and the next Narnia movie..

I’ve heard The Town is good (althought I’ve been told the language is pretty bad). And I don’t know about you… but I sort of want to see The Social Network and Ramona and Beezus(but that’s because I’m a bit of a nerd)

Did you not like Inception? That was the most creative, original movie I’ve seen thus far this year!

I loved The Town. If you are looking for something small and a bit interesting try One Week…Josh Jackson (yes, Pacy from Dawson’s Creek), a motocycle and Canada…quirky, funny and a wee bit black. It came out last year and made it to my DVD collection. Also saw The King’s Speech at TIFF (Toronto International Film Festival) a few weeks ago and it was AWESOME…and had Colin Firth. It is not out in theatres yet, but I think you will be pleased with it when it is.

I agree with you Lauren – I really liked Inception. There were a few “Oh come on. Really?!” points that you just had to let go, but it was such an original story. Although I’ve only seen it once, it seems like it’s also one of those that you could watch ten times and see something new each time.

I totally agree with you Lincee. There has not really been any movies that I can think of that have gotten me really excited, made me want to buy, or even see in the theater! We usually just wait till it comes to the Redbox and then are glad that we didn’t waste any more money. It’s a sad movie year…

I kind of enjoyed The Other Guys with Will Ferrell and Mark Wahlberg but I really like stupid humor. My husband forced me to see The Girl With the Dragon Tattoo, in Swedish, with sutitles, because he’s totally hooked on the books. It was actually very interesting and kept me thinking about it for a long time after. I’ve spent some enjoyable nights at the movies this year but I probably would have been just as happy staying home and continuing through the complete series of The Gilmore Girls with my daughter. I would have to agree with you Lincee, nothing so far that I would want to own.

Lolly…you had me at Pacey.

So is that an endorsement of Life as We Know it? I can’t tell. LOL

Ok my husband and I LOVED Going the Distance with Drew Barrymore and Justin Long. We laughed hysterically and enjoyed the romantic parts too. If you haven’t seen this and like either of those two actors, I highly recommend it.

Totally agree Lincee….I’m normally a Sunday morning (when the theatre’s empty cos in my old age I can’t stand the rattle of chip packets, slurpees being sucked, phones being answered, people talking – c’mon I didn’t pay $13 bucks to hear YOU talk!) avid movie goer…but this year nothing’s grabbed me enough to make me want to make the 10 min journey to my local Reading’s Cinema! Don’t know how the Academy Awards are going to go next year for a pretty average year of film making!

The Town and Inception were both really great movies and should be included in your 2010 Thanksgiving gratefulness letter! 🙂

I loved Toy Story 3 (but then again, I haven’t seen a Pixar movie I didn’t like). That and Iron Man 2 were the only movies I’ve bothered to go see this year – there hasn’t been anything else that I couldn’t just wait and Netflix…

Saw Social Network this past weekend & it’s a worthwhile flick. Go see.
Only prob – saw it in a MEGA theater – MEGA screen – MEGA bucks to see it and MEGA SOUND and my ears are still ringing. Movie didn’t justify MEGA anything … it would be just fine on a smaller screen.

I thought Inception was not only the best movie of the year so far, but one of the best I’ve seen in a long time. It was smart, interesting, and held me completely captive right up to the mind-boggling end.

“Life as We Know It” is a great flick. I won’t own it though. Inception seems to be winning this argument and I totally forgot about Toy Story 3! Thanks guys!