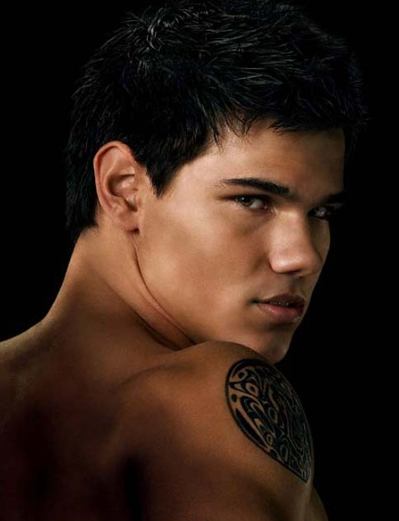 Not only is the werewolf literally hotter than Edward (from a blood perspective), the feedback from the majority of audience members during the 7:30 showing of Eclipse at my local multiplex last night was inexplicably TEAM JACOB.  For every 20 Jacob t-shirts, sweat shirts and homemade water bottles (what?), there was only one Edward representation.

Let’s put the evidence of said paraphernalia aside for a moment and examine the REAL facts…audience reactions during the film.

1.  The scene opens with Edward and Bella in their special meadow.  There was no woo-hooing for Edward.

2.  The first time Jacob enters the picture, we see him waaay in the distance near his motorcycle.  A murmur spread across the audience.  We knew we were about to see him.  And then the camera gets a close up as he walks with determination up to Bella.  The tweens went WILD!  And when I say tweens, I mean the 30-somethings because I was whistling like I was a construction worker on a busy street next to a modeling agency.

3.  The first time Jacob is shirtless was epic.  I pulled out my vuvuzela horn and started chanting with the entire stadium.  The buzz died down long enough for Edward to deliver his line, “Doesn’t he ever wear a shirt?”

Here’s hoping NOT!  And the screaming resumed.

4.  Edward bends down on bended knee to to ask Bella for the 50th time if she will be his wife.  Maybe four people in the audience answered yes for her.  The rest of us rolled our eyes.

5.  Charlie comes out of the house to step between Edward and Jake asking, “What’s the problem guys?”  Jake slowly and meticulously answers, “I kissed Bella.  And she punched me.  And broke her hand.”  Charlie grins.  Audience cheers.

6.  Jacob enters the tent where Bella is freezing to death.  He convinces Edward to let him wiggle in Bella’s sleeping bag because he’s hotter than him (Amen) and then tells Edward this process would speed up if Bella had her clothes off.

7.  Jacob tricks Bella into shouting, “KISS ME” before he runs off to battle.  He whips around, storms up to her, grabs her face, looks hard and then gently kisses her for a good 30 seconds.  There were high fives, blatant requests to REWIND THAT PART and girls fainting in the aisles.

I think we are experiencing a shift in power my dear readers.  The Wolf Pack is on the rise.  And I am declaring myself the unofficial Houston Pack President.  Team Jacob.  Who’s with me?

I had the same reaction at the theater I went to… How ’bout team Carlisle?

He has to trick a girl into kissing him! How does that make him hot? Team Edward!

Amy I agree with you one hundred percent.
SGT Cole I am loving that you used the word butterface.
Lincee, my all-time biggest blog-writer crush, I nearly peed myself at work when you referenced your vuvuzela.
I love being an “old” in a theatre of the recently untweened. Whooping, hollerin’, salivating. And those young girls ’caused quite a ruckus as well.

TEAM EMMETT! Just sayin! If you’re talking who is actually hottest, it would be Emmett and I don’t feel so bad liking him since he’s at least older than 18! 🙂

I have not read a book or seen a movie from this series but even I, an uninterested bystander, do not understand why anyone would choose the milquetoasty Edward over Jacob. They keep showing clips of Bella kissing Edward on previews and I have to look away – he is so pasty and he looks like he has consumption or some other disease that would cause him to waste away.

but i want to hold that vampire kid down and forcibly shampoo his hair. And then shave it. Those aren’t my usual romantic feelings, so I’ll assume that means i’m not on his “team”.

Also, I’ll generally choose “muscle-y” and “alive” over “consumptive” (thank you barchbo! that’s exactly the word i’ve been looking for!) and “dead”. also, i don’t like being cold.

I’ll completely Team Edward… Except when Jacob is shirtless!

Someone please tell me that Mr. Lautner is no longer jail bait. I know I should be horrified to oogle a kid young enough to be my son…but holy cow that kid is HOT!!!! As for Edward…blech…I suppose he’s ok if you like cold blooded, glitter boys.

While reading the books , I was always Team Edward but this movie has made me move on over to Team Jacob. It isn’t just because he is a hottie he also has more personality. Edward is so pathetic in this movie.

I totally agree with all who say Team Edward in the books and Team Jacob in the movie. I never once wished Bella would choose Jacob (or even thought she might) when I read the books. Edward is WAY sexier. But that Taylor Lautner makes Jake adorable. I also agree with Jess, that Emmett is by far the hottest in the movies. I would take him over Rob or Taylor any day!

I’m just an old granny but it’s Team Jacob all the way. I may be old but I know hotness when I see it!