One of these things is cooler than the others

When I received this awesome picture from IHGB reader/triathlete Kari, it took me a while to process what I was seeing with my very own eyes.  Take a look for yourself: 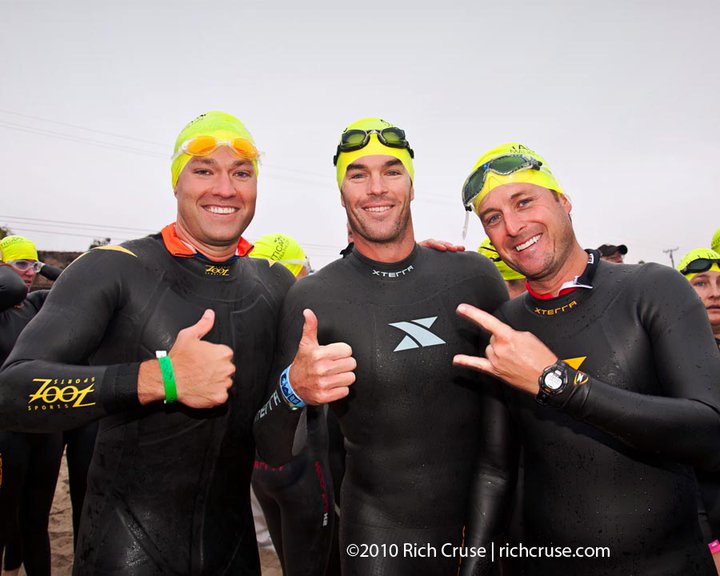 1.  I’m convinced that Lieutenant Doctor Andy Baldwin shot at least four rounds of Botox into his forehead before the triathlon.  Does anyone else feel that he is wearing waterproof mascara?  The eyes are popping a little too much for me.  And I get that swim caps are supposed to be tight, but surely he should re-think the elasticity if he appears to be an Asian drag version of himself.  Am I wrong here?

2.  Ah.  Trista’s Husband Ryan…you are so pretty.  It’s a special sight to behold when you can count a man’s six pack through his wet suit.

3.  And then there’s Harrison.  I’d be willing to bet that he’s pulling back on the charm because he feels sorry for the other two.  His teeth are gleaming white.  His goggles are über stylish.  And when Asian Lieutenant Doctor Baldwin suggested they “thumbs up” for the camera, Harrison schooled our former Bachelors on what constitutes an appropriate manly hand gesture.  It’s either “rock on,” a reverse hook ’em horns or a secret LA gang sign he’s flashing to his fellow boyz in the hood.

wow and wow. this is motivation enough to start training for a triathlon! woot.

Hare – he’s so awesome on so many levels. I agree with you about Andy Baldwin. ewwwwwww. The Asian tranny line is perfect and hilarious.

OMG! I was looking at the picture thinking that Andy Baldwin must be your friend, Kari. Please forgive me, Kari!!!!!!!!!! What is wrong with AB? He’s a freak show!!

Ryan and OHCH are absolute dolls! They must ditch the “chick” in this pic!!

Absolutely made me LAUGH OUT LOUD!!!
You are right on about AndyB.
I thought before reading your caption: Who IS that Asian guy? Looks familiar, but NOT.
And isn’t Ryan STUNNING?!

PS: And poor AndyB’s NECK. What’s with that? Sorry, mine’s not anything to write home about, but that’s precisely why I don’t wear really tight wetsuits.

At first I thought Lt. Andy Baldwin was Firestone that had gained a few pounds… anyone else see the odd resemblance?

I’m still not sure I believe that is the same guy I watched ditch Bevin the ankle faker, but if you say so.
Trista’s Ryan is HOTT!

This just made me so happy. Can’t wait for the season to start and for your recaps!!!

so happy to share – no one writes a caption like lincee! just sorry i wasnt one of the wetsuit strippers at this race.. 🙂

I totally thought AB was an asian guy before I read your post!

oh Andy Baldwin time has NOT been kind to you lol Ryan just a little more manly than poetry reciting yum…..and Hare totally rockin’ the Let’s Rock and being wayyyyyyyyyyyyyyyyy too cool for former reality show contestants! lol

This picture is great!
OHCH is pure awesomeness, of course!

Ryan – the six pack is beyond impressive. He’d make a better Batman than Christian Bale because he wouldn’t even need fake Batsuit abs – he rocks his own amazing abs!! WOW!

Then… there’s Andy Baldwin. Oh Lincee, you made me laugh with your waterproof mascara making his eyes pop. Poor Andy! He’s just a mere wallflower next to the other two guys in the picture.