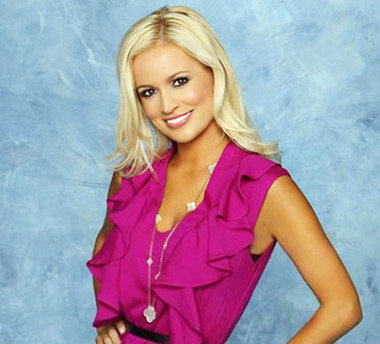 Many of you emailed, Facebooked and tweeted me the big news that People Magazine announced on Wednesday that Hotter Than Crap Brad’s former fiance Emily is the next Bachelorette. (Click HERE for story.)   I’m not surprised at all that ABC is recycling due t the fact that the Bachelorette’s entire franchise is built on a foundation of former contestants.  Emily and her tiny white shorts will be number eight in a line of women who didn’t find love at the mansion, starting way back in 2003 with their golden child Trista.

I think what’s more surprising is that she’s actually going through with it.  I think Emily is darling.  And for a young girl, she’s certainly lived a very dramatic life.  She seems to have a pretty good head on her shoulders and from what I’ve read, the entire experience was something that she didn’t really enjoy the first go around.  I’m sure a certain hot guy with a ridiculous back tattoo promised her the final rose from the very beginning and all she had to do was sit back, relax, go on exotic vacations and try not to miss her little girl too much.  But then reality sets in and you find yourself on Sixth Street wondering how you got from the African safari to here?

Based on the fact that she’s 25-years-old and her house is bigger than most people I know, I doubt she needs the money.  I understand also that the show is setting up shop in North Carolina so she doesn’t have to be away from Little Ricki.  I’m sure the in-laws love that.  She was loved by every Bachelor contestant in Ashley’s season and the rest of the nation.  Why is she going through such ridiculous lengths to land a man?

Also, I found her ridiculously normal.  Normal people have a tendency to make the ratings stale because they aren’t willing to make complete fools of themselves.  (See: Firestone, Jesse Palmer and our current Groban.)

The only thing I can come up with is that she’s vying for the open spot in The Bachelor Pad as co-host since Melissa Rycroft is no longer the Cher to Harrison’s Sonny.  The Hollywood bug has bitten and Mike Fleiss probably moved mountains and sold his soul to get America’s favorite single Mom as his next Bachelorette, promising her fame and fortune, or a gig as an Entertainment Tonight correspondent at the very least.

Am I totally off?  Why do you think Emily is diving into this game again?  Do you think it’s really love?  Or is the paycheck just too good to pass up?  Do you think Brad is going to get another tattoo to ease his pain as he watches her make out with other dudes?  Sound off in the comments section!

Emily is in it for the paycheck and more “fame”.

On Brad’s season I liked her but she still wasn’t my favorite. Then when her and Brad were on after the show was over, I saw Emily’s b*tchy, insecure side and didn’t like her at all. The writing was on the wall that her and Brad were not going to last the long haul.

I don’t see why the show can’t bring in one of the gals from the current Groban season Lincee. There are a couple of really good ones who would make for a great Bachelorette season, but alas, Fleiss wants to bring in “old news”. I’ll watch, but I don’t like her. Her overly white veneers, fake sincerity/sweetness and overly processed fake blonde hair always distract.

(We all know SGIA will be excited for her white short shorts. lol…..)…It would be better with someone else.

That said, I do look forward to all your blogs. You make any season very enjoyable Lincee! 🙂

I wholeheartedly agree with every word you typed. I am befuddled…if that is the right word…over this news and very curious to find out her motives (if that can be done).

I bet they are going for someone from an earlier season so they can tape it earlier. I just don’t understand why SHE agreed to do it.

I am so tired of them recycling people!

And after the fallout with Brad, I heard and read stuff about her that makes me dislike her. (only dating wealthy & somewhat famous guys, loving the attention from when she was on Bachelor, etc)

I like to get to know the new people on each show, but not too much, ya know?

I really didn’t like Emily. I felt that she was fake and wonder how she will keep it up for another season.

Boredom? She probably has enough money that she doesn’t have to work and has nothing else to do?

I enjoy watching the “Girl next door” types more than the drop-dead gorgeous ones. Even though I would never go on this, it still makes you feel like it Could be you. But I could never be Emily…

Clearly, Emily can’t be as sweet or normal as she once seemed. As for shooting in NC, can’t decide if that is legit out of concern for Ricky, or if it’s going the extra mile on ABCs part to solidify the angelic Emily image they have crafted…

Totally off topic, are you as psyched as I am to hear that Cape Cod Chris has his own show on HGTV premiering in April?!

How about this for a “fresh approach”? A new series called “The Mature Bachelorette”. I am a “somewhat older” bachelorette who has never married, independent, and have a “real job”. I would love to have 25 bachelors drooling over me!

I agree with Lincee that Emily is in this for a TV career. She did host some show dealing with Nascar after Ricky’s death…even though the show made it seem as if she had not set a foot on the race track after his death.

For a woman who carried on so much about how all the publicity and press took a horrible toll on her relationship with Brad (which I call bull on since she was so not into that poor lovestruck fool at any point during that show) and disrupted her daughters life and she just wanted to have a normal life, there is just no reason to come back. And if you value your privacy so much, do what other people did…see Chantel O’Brian, Cape Cod Chris, Reid…and go back to your regular life.

I also agree with Nancy, I think they are filming it in NC because they want to maintain that angelic, MotherTeresa image they crafted for her. How can that be when she is dating 25-30 guys. She will have to make out with more than just one and she can’t keep saying we’ll just talk…and if she does…it will be even more boring than I already think she is.

On a positive note…hopefully all the guys that were raving about her over bleached blonde hair, fake teeth and boobs, will beat a path to the door of Mike Fliess and we will have some serious eye candy…and hopefully some fake skiing in shorts with many butt shots and six abs for us ladies to enjoy!!!

Emily sure had issues with Brad “dating” other women on the show. Now the tables are turned. Will Emily kiss other guys even if she found love with someone else? hmmmm

Some Guy in Austin

Lets just hope she has several pairs of those white shorts in her suitcase. DP

I think you are awesome Lincee but the best part of this post for me is seeing Nancy’s comment that CCC is getting his own show!!! 🙂

I think I’ll pass on Emily’s season just as I am on Groban’s, but your post are still my laugh medicine!

Saggleo -SO glad you saw my comment about CCC – you were one of the people I thought of when I saw the news!! “Going Yard” will be added to my DVR list in April – even though I have zero interest in landscaping!

OMG does this mean Bentley will also make a return..because as we all know..he was SO not into Ashley and only went on Bachelorette because he thought Emily was it lol

Nancy-I hear that and I Thank UUUUU!! 🙂

I would love to see a show with some girls who are size six or larger…girls who have more pride in their self-worth than they do in a bikini. I don’t think ABC/Bachelor would do it, but I think it would be more relateable to America.