The Men of May

I have to say readers…the May finalists for the Dr Pepper contest are not playing around. These guys have come to win! Take a look below and vote for the one who you think deserves a year supply of the good stuff. Trust me…it’s going to be HARD to decide! Have fun! 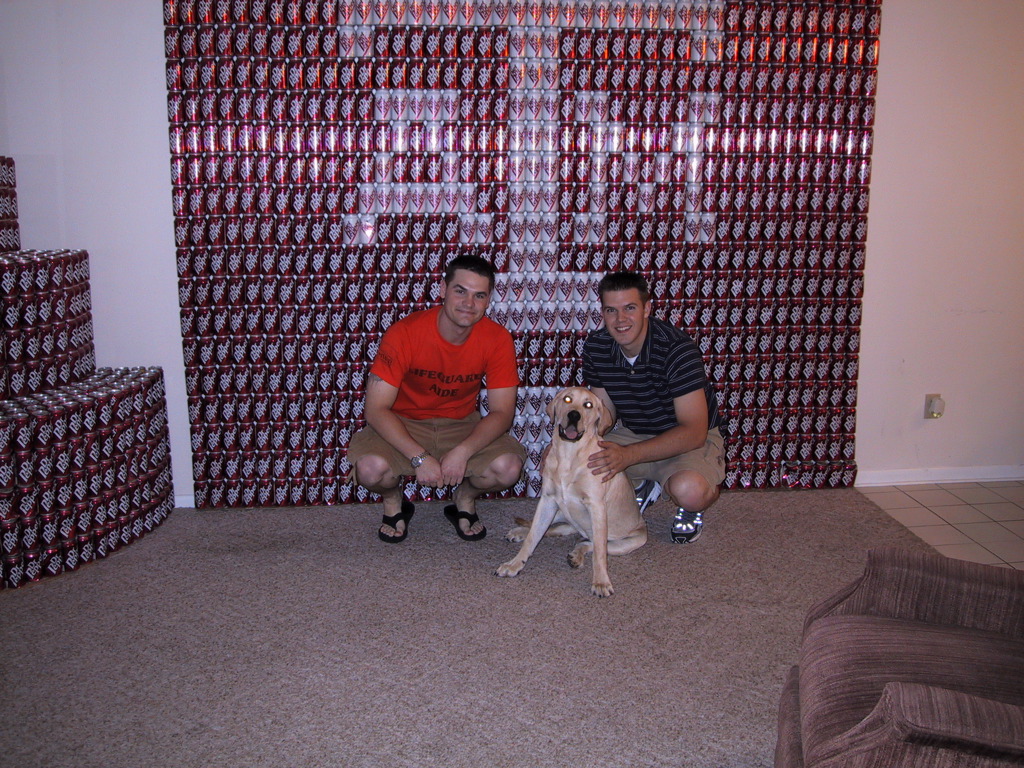 This photo was taken 10 years ago in an apartment near the Texas A&M campus. Here we have Chad, Seth and Jaxon the dog posing in front of a wall of Dr Pepper cans, representing both the original and diet flavors. The structure on the left is the bonfire the school is known for, also made of DP cans. This is our first cute boy submission that is both art AND vintage. Reader Courtney has asked me to include the small detail that her boyfriend Kevin (at the time…now he’s her husband) was the one to actually build the work of art behind his college roommates. If they win, good luck splitting the prize four ways. 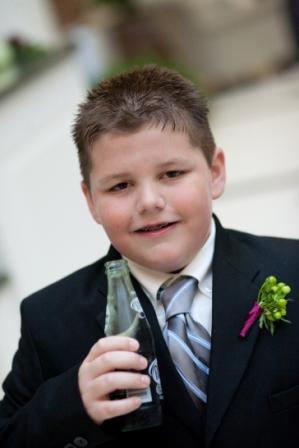 I would have loved to have been invited to IHGB reader Karen’s wedding. She served Dr Pepper IN A BOTTLE at the reception. And luckily, the photographer captured her darling nephew in a teeny tuxedo drinking the glorious beverage. A-D-O-R-A-B-L-E! 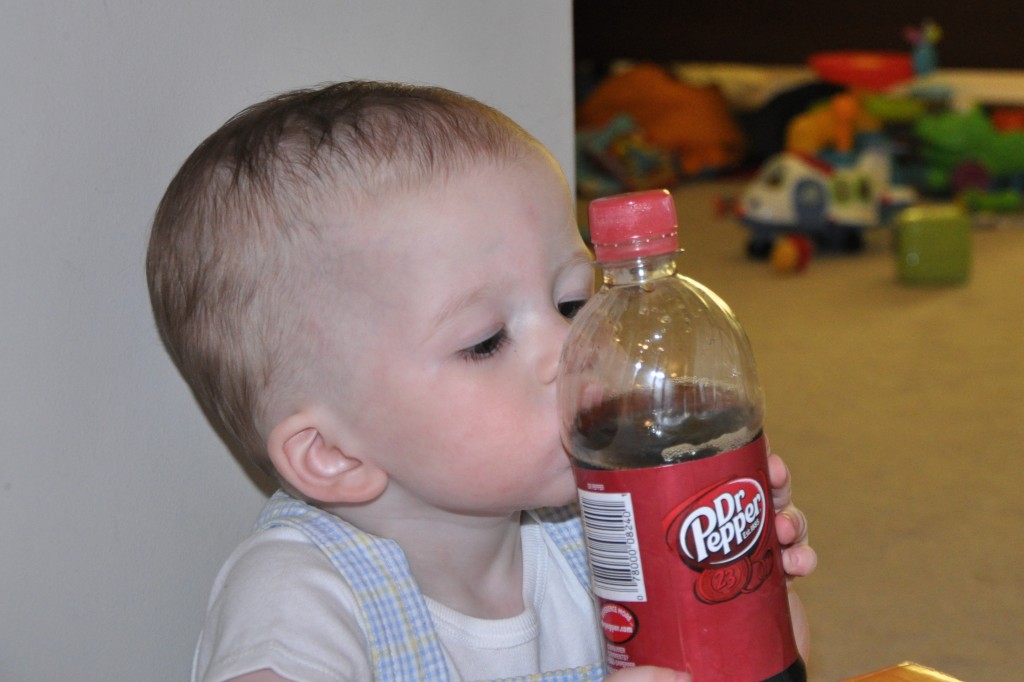 This is directly from the email Jim Beau’s mom Mary sent me: “Jim Beau was born with Congenital Diaphragmatic Hernia (CDH). I drank a Dr Pepper almost every day for the 43 days that he was in the NICU! Now, every once in a while I have one and it not only reminds me of those days in the hospital, but it reminds me of how precious Jim Beau’s life is!” What a sweet boy. I’ve kissed a DP bottle a few times in my life. I totally get his affection. 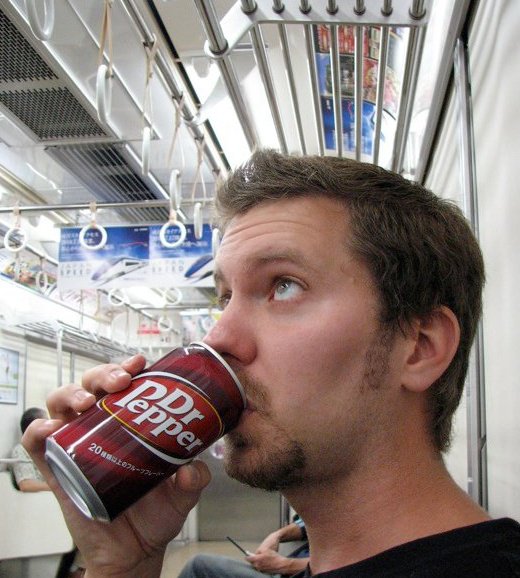 Mike has a fabulous hobby…he seeks out Dr Pepper when he is traveling the world. How cool is that? Here, Mike is drinking Dr Pepper from Japan. He’s visited 40 countries in total and has found DP in Mexico, Canada, England, Ireland and Wales. Not only does Mike’s wife who submitted the photo confirm that he is a huge fan, I can see Dr Pepper putting Mike on some committee that FINALLY gets Dr Pepper in more countries across the globe. I’m with you Mike…we can only hope. 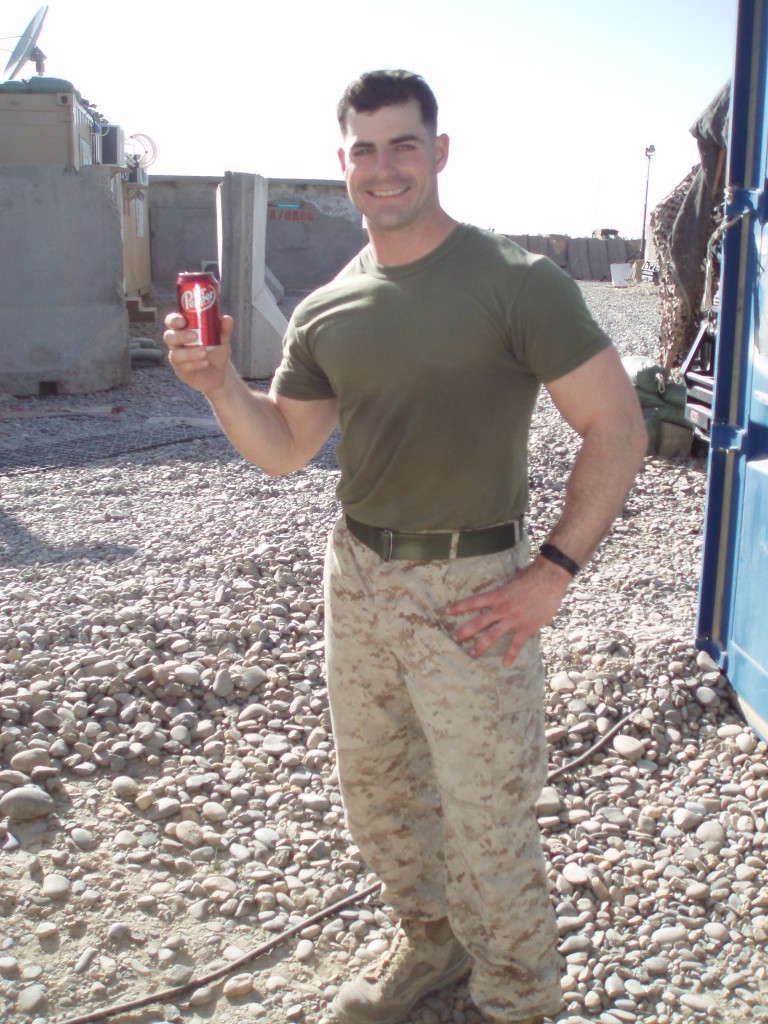 Josh just got back from Afghanistan, but will be returning for one last tour and then he’s done. His friend Kodi sent me three photos from which to choose, but sadly I can only post one. Enjoy responsibly.

Now it’s time to vote! I will post the winner late SUNDAY night. That gives you a little more than 24-hours to be heard. Good luck!

Woo! This really was a tough one… I love the work done by the A&M boys, but I will have to go with Studly Josh!

I’m voting for Josh the Marine and thanking him for his service.

The A&M boys’ work is impressive, but my vote totally goes to Josh the Marine!

Whoa! Tough one. Jim Beau is so precious, but Josh gets my vote.

Wow… Lincee, I don’t think it fair to us to jam pack so many great submissions into one month. 🙂 In my mind they would all be winners.
I have to give my vote to Josh the Marine. He’s such a cutie, and he’s serving our country.

semper fi all the way…

all are great, but i gotta go with Josh too!

JOSH THE MARINE!! And thanks Josh 🙂

Gotta give it to the man in uniform…Josh

I, too, cast my vote for Josh, the Marine.

I vote for Josh as the next bachelor!
I mean, for the Dr. Pepper calendar.
But I did notice there wasn’t a wring on that muscular finger.

I meant ring. I’m not a total idiot.