My thoughts on the Golden Globes 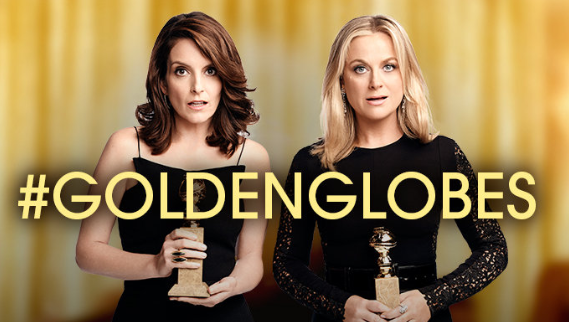 Each year, celebrities gather together in a hotel ballroom and wait patiently for the next commercial break so they can run over to chat with Oprah, pitch their script to Rob Marshall and fill up on more booze. The Hollywood Foreign Press calls this The Golden Globes.

Inevitably, I settle in for three hours of, “What is she wearing?” and “Why have I never heard of any of these movies?” Here are some of my favorite highlights from the night:

1. Tina and Amy’s “Would You Rather”
Tina: Colin Farrel or Colin Firth?
Amy: Farrel. All day.
Tina: Firth for a polite amount of time.

Amy: Ed Norton or Mark Ruffalo?
Tina: Oh. Which one was The Hulk?
Amy: Both of them.
Tina: Shoot. Okay, I’ll take Norton because he’s “method” and he can act like he was into it.
Amy: I’ll take Mark because everyone knows I like it Ruffalo.

Amy: Chris Pine or…
Tina: CHRIS PINE! I’m sorry. Was that too loud?
Lincee: Not at all Tina. I’m right there with you.

2. I Don’t Get It
Was the exchange between Jennifer Aniston and my beloved Cumberbatch a bit? She did not look happy if it was an unplanned schtick. It’s like they were on a break or something.

4. Funniest Quote at the Expense of Jenny 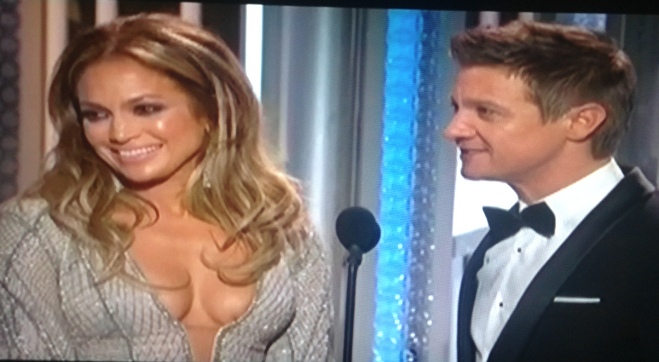 JLo: I can open the envelope. I’ve got the fingernails.
Jeremy: You’ve also got the globes. 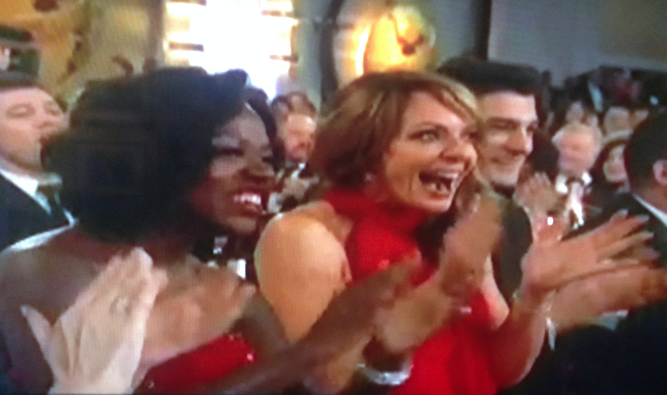 Allison Janney and Viola Davis freaking out over Prince. I would totally geek out too.

7. Matthew Bomer
His hair may look off, but he’s still hot.

8. Big Eyes
I think Amy Adams and I would be friends if given the opportunity.

9. Golden Arches
Since when do McDonald commercials make me cry? 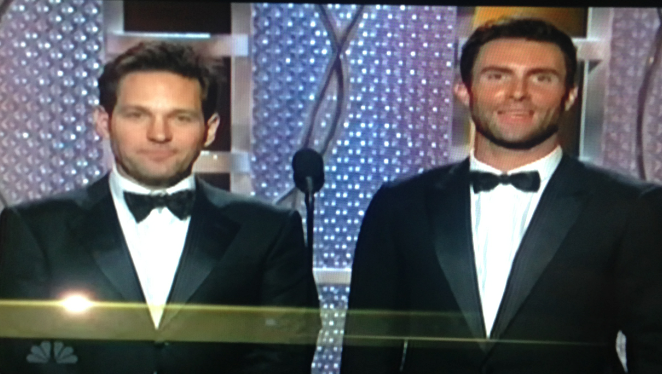 12. $#$@
Kevin Spacey dropped an f-bomb in his acceptance speech and still manages to be classy.

13. Cecil B. DeMille Award
Clooney is epic. So is his wife.

14. CBS vs. NBC
My dream is that one day, Chris Pratt and Anna Faris will adopt me.

15. Batman
Michael Keaton’s acceptance speech and tribute to his son made me experience all sorts of feels.

16. Hair Today, Gone Tomorrow
Matthew McConaughey’s beard is about to take a life of its own. It will, no doubt, drive a Lincoln.

How do you think Tina and Amy performed? Do you think Boyhood was Best Picture worthy? Did you feel that McConaughey’s beard was an epic feat of engineering? Why was everyone so orange? Sound off in the comments section!

Love your 1st paragraph(s)! You captured my mentality of Hollywood award shows to a “t”. Because I have small children, I saw very little of the show, other than j-lo’s globes. I appreciate your blog for filling me in on the highlights.

Lincee
Reply to  amy a

Thanks Amy! I’m glad you enjoyed it. You didn’t miss much!

My IMDB app got a workout last night as I tried to figure out what/where half of those TV shows were! And talk about feeling lots of feels – wouldn’t any woman want to have George Clooney say those things to her? Swoon…

I know Debby! Most of time I’ve at least heard of the movies, but this time was VERY different.

And the end of George’s speech was completely lovely.

Hi! New to your blog, but not for long. Great re-cap of the awards. You didn’t miss a beat. As Arnold would say…I’ll be back!!

Welcome, welcome Katie! Thanks for stopping by.

Wonderful recap. Great show. The “who would you rather?” schtick was hilarious, and when Tina said CHRIS PINE so loudly into the mic, I thought of you, Lincee. lol 🙂

I was right there with Tina. I would have interrupted Amy and everything. He’s adorable in “Into the Woods” too. The “Agony” song is HILARIOUS.

What *was* up with Bomer’s hair? It looked painted on or something! I was very confused by that.

I. Love. Kevin. Spacey. And when his first words were in Frank Underwood’s voice, I may have licked the TV.

CZJ looked great, but Jane Fonda beats everyone in the “I either have amazing genes or the best doctors money can buy” dept. She looks ridiculous! Better at 77 than most women look at 47. I want to be her when I grow up.

Totally forgot about Jane Fonda. She was flawless. I want her genes.

I think Bomer is either losing his hair, going grey, or it has been dyed for another role and he wanted to be brunette for the show. It was definitely off.

I thought they all looked orange too. In fact I thought George’s head looked more orange than the rest of his face. Overall I thought it was a tad boring, not enough Tina and Amy. And the actors didn’t seem drunk. Except Michael Keeton, he seemed drunk.

I loved Michael. He will forever be my Batman.

Oh and I thought that Julianna Marqueles (I know that isn’t how you spell it) looked a little boyish with her hair pulled back like that, strange. I loved Lupita’s dress.

I loved Lupita’s everything. But especially her glasses.

Why is everyone so orange? Because it’s the new black.

And that beard…beards shouldn’t be wandering around on their own. Like a German shepherd, a beard is a thing of beauty, strength, and power until you give it a bit too much freedom and result in fearing for your life. That said, I do think Mr. Lincoln and his wife exuded a bit more moxie than anyone else, thanks in part to the facial hair and resolute acceptance thereof.

Oh Laura. You slay me. Please comment all the time.

They all have that “sculptured” fake tan spray, that’s why!!

Hey now, I have a German Shepherd and your biggest fear with her would be that she would lick you to death. LOL

Great show, but I was begging whoever ran maintenance on that ballroom to crank up the AC! Why was everyone so sweaty? Nerves? Free booze? My husband watched with me and laughed the rest of the night about the crack at JLo globes!

I think the AC was broken. There was a ton of fanning going on! And waxy looking skin!

What a BORING awards show! YAWN! I adore Michael Keaton. I have seen “Nightshift” over 50 times and laugh every single time. He was classic! What he said about his son being his best friend makes me love him even more. George and his wife are strange. You can’t say you don’t see it! I am really wondering if this was an “arranged” marriage as some people say it is. She looked like a mannequin. His behavior has changed. They hardly knew each other. Something is so so off about this union, trust me! Colin Firth and Collen Farrell- PUH… Read more »

I think the most cringe worthy moment was when Juliana Rancic, who looked scary skinny, offered a shot to George Clooney and his bride. The look on their faces was priceless, like you’ve got to be kidding. So she said something like “well you can’t drink before the awards so I’ll have one for you”. So tacky; so inappropriate and so obvious they thought she was ridiculous.

Loved Michael Keaton’s shout out to his son! Can’t wait to see Birdman. What was UP with Matthew McConoghay’s over-the-top southern accent?? I mean…we get it, dude, you’re from Texas. So am I. We don’t sound quite like this. He sounded like an actor PRETENDING to be from Texas.

Ha,I am convinced that he plays up the accent too – it’s so old! I know he’s from East Texas but come ON, you haven’t lived there in like 20 years. For the record, I’m a Texas too. 🙂

@Pumpkincakes–ditto to everything you said!! Clooney and wife are just weird. No contest–always Firth over Farrell. Mark Darcy…duh!!!

I know Mothercita! It is just so strange. George is reminding me of a “Stepford Wife” these days. HA…
I can hardly think of any guy who can make me swoon like Colin Firth as Mr. Darcy! Thankfully, I have it on video so that if I go through withdrawals- I can get a fix!

Great series of shares, Lincee — and all spot on! Tackiest series of comments of the night were on the red carpet when J. Rancid brought up doing shots of tequila to the Clooneys. First, as a person of Druze/Muslim descent it is entirely likely that Mrs. does not drink alcohol. Indeed, she said she “tasted” Mr.’s tequila; the comment itself suggests she does not in general imbibe. Second, Kelly Osborne’s challenge to Rancid that she propose “body shots” to Mr. — tasteless in the extreme. Personally I respect Clooney’s decision to marry a woman outside of the industry, a… Read more »

I loved all the comments made here-its was a equally boring and fun show-I agree that Jennifer Anniston got her nose out of joint for having to share the presenting duties. please get over yourself! Loved Jeremy’s comment about Jlo Globes and she seems so surprised-it you put it out there, expect them to be noticed 🙂