Turn on the air conditioner

Because Hotter Than Crap Brad is back! 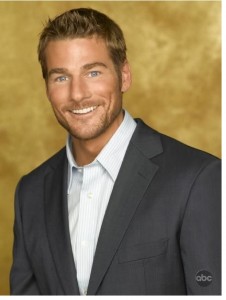 I heard that the new Bachelor would be announced on Dancing with the “Stars” tonight.  Of course, I got sucked into the awesomeness that is “Chuck” and totally forgot to tune in.  You can imagine my surprise when I received a Facebook message from IHGB reader Kodi that THE WEATHERMAN was the new Bachelor.  Then my Blackberry really started to blow up with messages like, “NOOOOO!” and “I thought he liked guys?”

Clearly, something fishy was going on and it had Our Host Chris Harrison’s name written all over it.

Apparently, Harrison shared via Twitter that the man sitting beside him in the audience was the new Bachelor.  One quick pan of the audience before a commercial break revealed Our Host next to our favorite ambiguously gay friend.  Three commercials later, Tom Bergeron announced Hot Brad as the next Bachelor.

I’m telling you.  Harrison rocks.  And he lives to mess with people.  Only Hare could convince ABC to fly Weatherman out for the night to sit beside him for a five-second quick shot of the audience.  In one word?  Brilliant.

The Hare has talents.  I implore you ABC…PLEASE USE THEM MORE OFTEN.

It doesn’t bother me that Hotter Than Crap Brad has been given a mulligan.  Some of you think he was boring.  Some of you hate the fact that he didn’t pick anyone at the Home Depot proposal pedestal during his original season.

As I told another IHGB reader:  “Kellie.  Concentrate on his abs.”

Let’s face it.  It would be great to have someone new, but ABC experienced its highest numbers when HTCB was the Bachelor.  If we are going to recycle unsuccessful Bachelors of past seasons, I think we are looking at the best case scenario.

But this is just my opinion.  Feel free to sound off in the comment section and let me know what you think.  Will you be tuning in?  Is it fair that HTCB got a do over?  Will he and Harrison become best friends forever and share bourbon and cigars in the Pier  One Bureau room?

Works for me – bring on the eye candy!

Filling out my application now!!!

The pressure for him to pick will be huge … and so many woman will know him it may bring out more crazies. That makes for great trainwreck tv and I can’t wait! And he’s HTC Brad … that alone is good for me.

My hubby got hold of the remote & was switching from football to DWTS and I missed the announcement from Tom. I was really frightened for a moment there. Can’t wait to see HTC Brad…..especially since we were all jipped out of Kiptyn’s abs during Bachelor Pad!!!!

Am happy about the eye candy and the abs!! But Brad is not going to pick anyone at the end AGAIN cos he has clear commitment issues. Unless he’s made a deal with Fleiss to choose one for “appearances” (ie: so he doesn’t look like a complete goose!) only to break up with her 3 months later.

Still glad it’s NOT Jake who’s well and truly exceeded his 15 minutes..or Weatherboy….not sure I could stand that awkward awful kissing for another season!!

Woohoo!!! Bring on January and Lincee’s insightful and hilarious commentary!!

O.K. I’ll say it “At least he is not Jake”. I watched the entire show tonight because CH had been saying for days to tune in to see who the next Bach was going to be. Then the camera pans the audience and there is CH sitting next to the Weatherman. I let out a “NOOOO WAAAAY!!”, that scared my husband and the pets. I thought I had seen Brad behind them but wasn’t sure. From then on I didn’t pay attention to the dancing, just kept looking at the audience. Then at some point Tom Bergeron introduced Brad who by then was sitting next to CH.

Having the Weatherman there was the best red herring ABC could have come up with. It was in one word, brilliant!

Will I watch? Sure, just for the entertainment, but Brad was boring last time and I have a feeling he will be boring once again.

PTL!!! Let’s see some abs and thank the good Lord it is not Jake!!!

Have to say that I’m disappointed they didn’t pick someone new. We’ve already seen this guy and all of his commitment issues. Next!

Am I the only one that doesn’t like the moustache? I saw him on tv during DWTS and thought he was the twin brother who isn’t quite so hot. Did he have all that face hair (over the upper lip) last time? I’m not a fan. bleh.

Who’s coming to Austin for watch parties at HTCB’s bars on 6th Street with me?!??

I about passed out when I saw Weatherman sitting next to OHCH…THANK GOD is was a joke. I’m ready to sit back and just enjoy. 🙂

I don’t remember much about his personality. However, he is gorgeous beyond belief! And how could I forget his awesome accent? I hope he gets some decent women to choose from, but unfortunately, decent women don’t tend to cause crazy drama and drive up ratings.

LMAO….OHCH…funny! I must have missed that pan of the audience where people saw the Weatherman b/c I’m like..huh..that was OHCH next to Brad! LOL GOOD ONE ABC!!! Even though I missed that.

I’m with you Lincee…at least it’s not JAKE!