1. I received this picture (taken in Chicago) from IHGB reader Lauren. 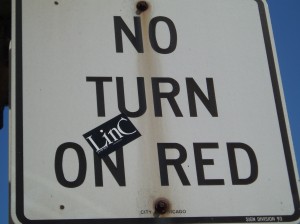 2. One of my favorite movies of all time is making a sequel. CENTER STAGE 2! According to various websites, CS is going urban, yo:

“Kate Parker, a self-taught prodigy catches Jonathan’s eye and makes it into the American Ballet Academy. Sadly things don’t go as planned and she’s booted from the school — only to meet Tommy, an ex-hockey player and unlikely new ABA student (obviously) who crushes on Kate and gets her a job at a hot NYC nightclub, The Foundry. Well, needless to say, sparks fly and I am sure there is an amazing dance-off to end all cinematic dance-offs.”

It’s going to be on the Oxygen network in November and then head straight to DVD. I hear Cooper Nielson will be making a cameo!

Now sit back, relax and enjoy the best dance piece known to man below. Michael Jackson, red ballet slippers, glitter lipstick, boys in eye liner, motorcycles, impossible costume changes, fake tattoos and a cool move by the bad guy around minute six. And who thinks the feature girl Jodi at the end looks like Jennie Garth while she executes 97 pirouettes?

thanks Lincee, I really enjoyed that!

OMG! I loved this movie. Haven’t seen it in a long time. I see a trip to blockbuster in my immediate future.

Woo hoo – to show how big of a CS fan I am – I own it on VHS!!! First time I saw it my friend and I watched it twice in a row and I was late getting home from Dallas, it was sooo worth it though!

Not only does she look like Jennie Garth, she’s all “I choose ME!” in that dance scene too.

Oh my gosh! This is the best news I have heard in a long time! I LOVE LOVE LOVE Center Stage! I have yet to own it on DVD (I know, I know, bad fan) but I often watch the YouTube clip you posted because it’s just so good!

Thank you for introducing me to CS! That was 9 minutes of greatness.

I love CS! Crazy story – I lived in Russia for a summer and on my return flight home from Moscow, I was standing in line at the airport with my roommate and I looked over my shoulder and my jaw dropped. I thought, “There’s no way – it can’t be them.” I turned to my roommate, “Are those two guys standing over there Charlie and Cooper from Center Stage or is that my imagination?” So what does she do? She waltzes over to them and asks them! Yes, indeed they were one and the same. Then to top it off, they were on our flight too, maybe 3 or 4 rows in front us. The kicker of it all – which I missed thanks to Dramamine – was that apparently one of my ridiculous friends was throwing peanuts at people and one hit ‘Charlie.’ Needless to say, he was not a happy camper. Alas, my brush with fame wasn’t much of a brush at all – I was asleep through most of it. But still – it’s a good story. 🙂

How did I never hear about this movie?

Yes on the Jennie Garth thing.

Now I have to ask: Which guy got the girl? Or neither of them?

i looooooooove it. can’t wait for the sequel
the hunk on the bike did NOT end up with the girl. sad to say. he should be with me. haha.

I just watched this movie yesterday! You’re right on with the Jennie Garth reference.

Love that movie!!!! She looks exactly like Jenny Garth. She ends up with Charlie at the end. However, I still heart Cooper Neilson. One of my friends cousins both dance in New York and are in their company in real life. She said they are both straight. Crazy!

I love this movie. Own it on VHS, DVD and the CD soundtrack. It’s the best.

Thanks for this Lincee, it’s made my ever exhausting, emotionally draining, 7 hour road trip end to the weekend better.

Lincee,
As a former ballerina who took up hip-hop this decade… I loved it! Don’t know why I never saw it, but I will. Thanks! :o)
(ad yes I thought she looked like Jennie Garth from the beginning…)

Love this movie – own it. Blond girl – morphed from Jennie Garth to Elizabeth Shue and back again… One thing I always had a problem with was “white-wife-beater-shirt-guy” always had on too much makeup – you could visibly see it in the movie – reminded me of a guy that I got rooked into going to the Great Gloomy Gathering with – who had visible Clearasil on the whole date… 🙁 Thanks for the laugh – great news! Ever try any of those moves in Jazzercise class????