I love that so many of you sent me a message or a link  containing the photo below from People Magazine’s website: 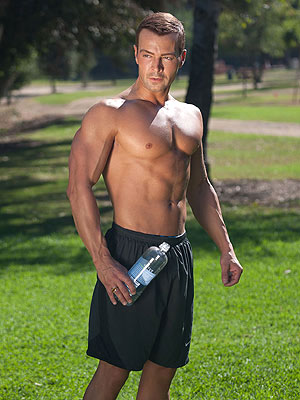 It combines both my love of the 80s and my love of a good set of abs.

With that said, I find it absolutely charming that People Magazine reported that Joey Lawrence had really “blossomed” in this random photo that was taken during his afternoon workout at a park in LA.  Random indeed.

Although I remember Joey being follically challenged during his steamy stint on Dancing with the Stars, it’s nice to see that his newly grown locks were perfectly obedient during his run.  And it was super nice of him to pause around dusk to take a sip of his electrolyte infused water while smoldering at the vast sunset just long enough for the paparazzi to take a few snaps before he went to the monkey bars to do this: 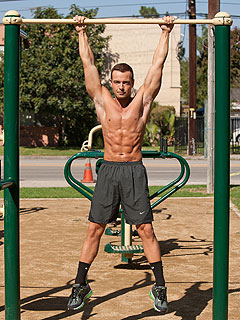 Kudos to his publicist for Tweeting Joey’s whereabouts so we could enjoy this not-at-all-planned act of physical fitness.  Next time, I’d re-think the socks and invite Six along for some see saw action.

Why does his head look Photoshopped onto his body? I don’t know…I’m all for men who take care of their bodies, but this seems a bit much.

At first glance, I thought the first pic was of Jean Claude Van Damme from back in the day!

Ah, Monday morning. This was better than a cup of coffee.

LOL…it’s the lighting Pippa….the shadows do make that look a bit waxy or something. lol

Work it out Joey! lol

From the title to Six, every single Blossom reference in this post made me giggle. Thanks … it was a fun pick-me-up on a sleepy Monday.

Hahaha. From the “Whoa” title to the “next time I’d…invite Six along for some see-saw action–so hilarious!

Wow Linsee, I can’t believe you noticed he had on socks! I sure didn’t! 🙂

Whoa indeed! He certainly has done some growing up, guys who look like that just don’t work out near where I live…..darn

The hair is killing me!

(My BFF swears that Joey is gay. But I think his chemistry with Sabrina the Teenage Witch is so convincing. Confused…)