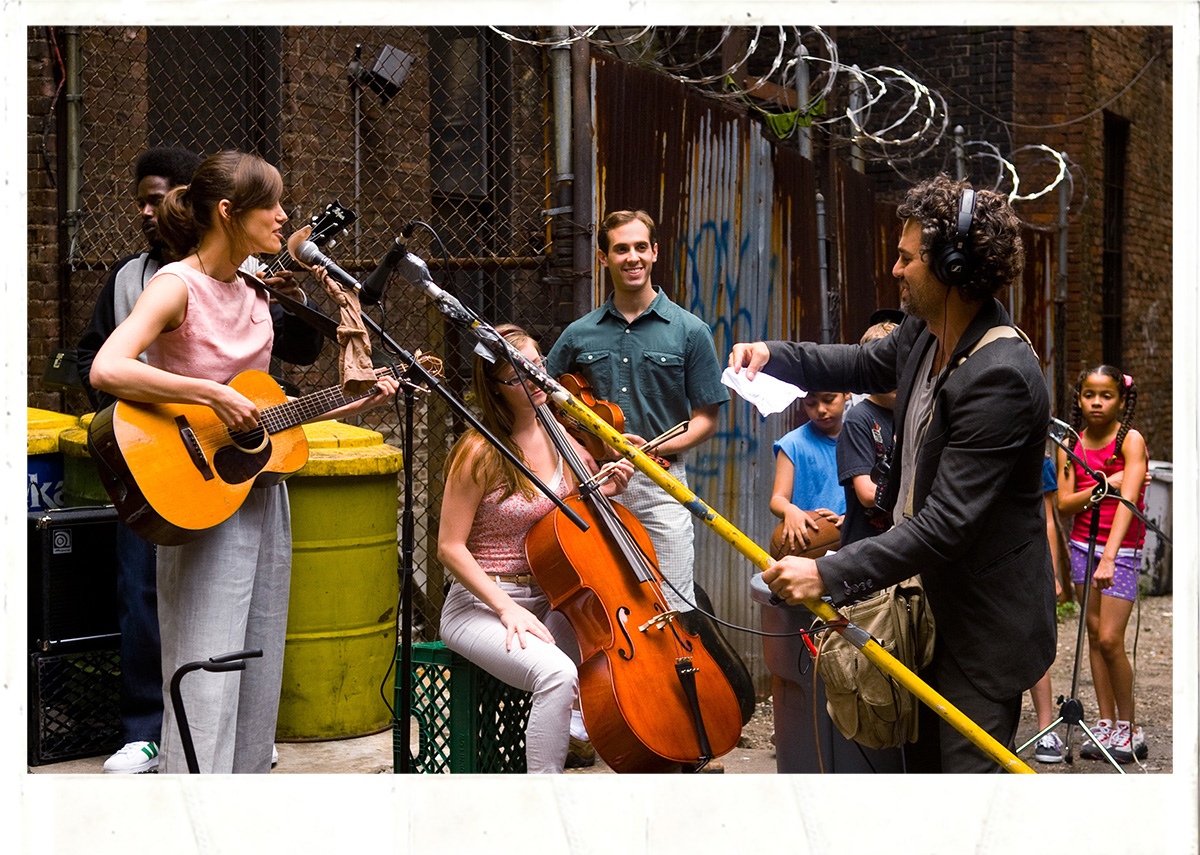 I recently received a text from my friend Blake asking if I had seen the movie Begin Again. He told me that if I had not seen the movie, I needed to stop whatever I was doing, get in my car, drive to the theater, buy a ticket and prepare to be transformed.

Blake: I don’t want to build it up too much, but you’ll thank me.

I immediately checked out the trailer.

They had me at Mark Ruffalo and Adam Levine.

Another text from Blake revealed that he had purchased the soundtrack the minute he left the theater. This was extremely valuable information since Blake is a walking deejay.

You see, Blake and I are like pen pals, but way cooler. We send mix tapes (read: burned CDs) back and forth from Dallas to Houston. In manilla envelopes. With stamps and everything. We’ve been doing this for years. You can learn a lot from a person by their thematic representation of a playlist, and I would trust Blake with my iTunes account any day of the week.

To sum up, Keira Knightly, Mark Ruffalo and Adam Levine star in a musical drama from the writer and director of Once. If that’s not enough, Blake endorsed both the movie and the soundtrack.

I was sitting alone in the theater in less than 48 hours.

As you probably gathered from the trailer, Gretta (Knightly) and Dave (Levine) are writing partners who move to New York City – the concrete jungle where dreams are made of. Dave gets a record deal and Gretta is discarded. She has resorted to singing in tiny bars in the East Village. Fortunately, washed up ex-record producer Dan (Ruffalo) discovers her around bourbon number three and offers to record her songs, her way, with New York City as their live studio. Gretta transitions from skeptical, to hesitant, into full-blown trust throughout the movie. And so does Dan.

The idea of recording a live album at various landmarks in New York City is exactly as cool and crazy as it sounds. Knightly, Ruffalo and Levine pour their emotions into each scene and I was swept up into the moment right along with them. The film has countless themes, but I believe the story is about how we must deal with choices we made in the past. We must build on the circumstances that have been handed to us, good or bad, and create something beautiful, new and exciting. And I love that Begin Again uses music to get us there.

How many of you can think of a song that immediately sparks a memory? I have dozens of them. This movie takes us through an array of human emotions and gives us a sneak peek into the healing that can come from a simple melody or a powerful guitar riff. It uses music to celebrate, mourn, escape and restore. To quote Blake, “It’s a story of recovery, freedom and forgiveness and about the life-changing ability of music.”

Clearly we both give Begin Again two enthusiastic thumbs up.

Music gives us the ability to write our own soundtrack to life. May yours be full of calming classical moments, dashes of down home gospel, flashes of hard hitting rock-n-roll, bits of soulful blues and of course, New Kids on the Block greatest hits.

I really wanted to see this but I missed it’s run in Houston theaters! 🙁 Did you see it recently, and if so, where??

Lincee, I saw it IN NYC in July, and loved it. I memorized all the songs before I got there. A step you can’t take back, Lost Stars, Like a Fool, love them all!!!!!

I caught it on the last weekend i think in north Houston, Aug 2nd I believe. Rent it on DVD this fall.

Love me some Mark Ruffalo …

Saw this six times in the theater and now that it’s left Raleigh, will be waiting for the DVD. Love, love, love!!!!!

Very handy, too, that the full soundtrack is available online through YouTube…it’s my morning musical companion :)))

Of course, I LOVE this !
This movie was such a serendipity for Blake and me !
It was a last minute excursion because his plane kept getting delayed and we had enough extra time to go !!!

I’m so glad everyone loves the movie as much as I do!

Anne…great tip! Who knew that YouTube was so cool?

I love you, Lincee, for your NKOTB references! Keep them coming!!!