How have we not talked about this?

First of all…thanks to everyone who has contributed to my song dilemma. I appreciate your insight and have narrowed it down to about four or five choices. Once I decide, I’ll let you know how the kids respond!

On to business…how have we NOT talked about the new lineup for Dancing with the Stars? Check out some of the lineup:

• Lance Bass: Lord help me if he does a robot/space themed number. His saving grace is that So You Think You Can Dance golden girl Lacey Schwimmer is he partner. She will be able to pull focus from his awkwardness.

• Cloris Leachman: She is 82-years-old and will be dancing with Mark’s Dad, Corky Ballas. I’m going to go ahead and say that I will probably love them.

• Kim Kardashian: Isn’t it ironic that Mark Ballas drew her name? And Lacey drew Lance’s name? Young hotties with young hotties seems to be the direction ABC is going.

• Maurice Green: He’s an Olympic gold medalist who has been paired with Cheryl Burke. I can only assume that he will be a dark horse competitor that Cheryl whips into shape.

• Misty May-Treanor: She’s cute, but THANK YOU LORD that Maksim Chmerkovskiy is BACK! 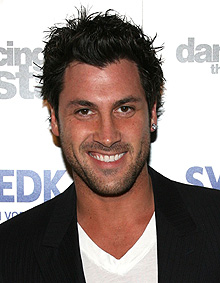 • Susan Lucci: Poor Tony. He always gets stuck with these women. Maybe it’s on purpose and he doesn’t want a bunch of heavy choreography. That HAS to be it.

• Brooke Burke: I can already see the “are they dating” packages suggesting they are secretly together. There’s one of those every year.

These are the ones I’m most excited about seeing. What do you guys think? The season before last is still my favorite. Will Julianne and Cheryl come back to win three? Will Mark repeat his win? Will Cloris have to roll around an oxygen tank at rehearsals? How many weeks will it be before Kim starts showing off her “assets?” Do you think ABC will air Misty’s “dance” moves from the beach from the Olympics even though it was on NBC? If so, do you think they will run it into the ground? Will Maksim be your new wallpaper on your computer as it is mine? Do you think Joey Fatone will be in the audience every Monday night in support of his band mate Lance? Will Lacey get in trouble with mugging with the camera instead of her partner? Who’s pumped to hear what wackiness issues forth from Tom Bergeron’s mouth? Do you think there’s something, something going on between Len and Bruno under that table? And does everyone love saying Carrie Ann Inaba like that announcer dude says every week?

It’s the IHGB Dancing With the Stars soap box. Step up and be heard!

Okay, Lincee this just makes me love you more. DWTS fan! I have to say – Mark Ballas is very very hot. Yes, there is much talent on the show but Mark – wow!

last season was ok, but this one is shaping up to be much better i think. you’ve got old, you’ve got young, you’ve got lots of sexy ….

but really …. and most importantly ….. you’ve got Max back. all is now right in the world. Are we supposed to vote for the “Star” or their partner? I have a feeling Misty May is going to do well. 🙂

I know this is off topic, but look what I found: http://www.realitytvworld.com/news/andy-baldwin-officiate-deanna-pappas-and-jesse-csincsak-wedding-7718.php

I can’t wait for DWTS to start! I’ve watched bits and pieces if I’m anxious for the bachelor to start but this season has me really interested for some reason.

Will Samantha wear a dress in another colour besides purple and varying shades of purple? If she even made the daring leap from fushia to violet I could forgive her less than witty commentary. (ie.”Are you happy that you got a high score?”) I wish they’d bring back Drew.

Can I get an AMEN that Max is back. Holy Lord, that makes me happy. It looks like it’s going to be a good season.

Oh that Mark Ballas. Yummy! Mmmmmmmmmmmm…SO happy that DWTS is back but NOT happy that KimmyCar is with my man! LOL!!!!! Wrong!!! Totally WRONG!!!! LOL!!!!

I am genuinely concerned for Cloris. Correct me if I’m wrong here, but if you are a card carrying member of AARP, don’t you owe your hips a little more vigilance?

Love that you’re going to start talking about DWTS – this show hooks me in some twisted way every year (I still have nightmares about Priscilla Presley’s botox’d-to-the-max freaky face)….

Love, love, love Cloris and genuinely hope she does well! Come on Mary Tyler Moore fans – rally behind the old gal!
Also, adore La Lucci — yes, I’m a long time All My Children fan and Susan L. is a class act!
Really want Kim K. to fall on her face — making a sex tape that hits the internet does not a ‘star’ make
None of the men really thrill me this year — a chef? who?? what?? and that comic annoys the crap out of me! Hit the road guys….
Warren Sapp is cool, but he’s awfully big, don’t know if he’ll have the moves to match what Emmit, Jason and oh, what’s his name from the 49ers???? anyway… those guys….

i’ll be tuning in!

My husband LOVES saying Carry Ann’s name.. Too much fun….

I have to say… Kim Kardashian’s participation makes me want to boycott the show. Maybe I’ll just fast-forward through her performances. Other than that, I can’t wait!

I’m a huge DWTS fan. And a long-time (almost 40 years) fan of Susan Lucci. With only one Emmy after all these years, she has plenty of room for the DWTS trophy! I get a kick out of all the personalities — dancers and stars. But I am truly in awe of all of the dances they do — and how well they do them.

I hope you will make at least a few comments each week about the show.

TexasGirlNYC, that’s so sad! She is totally the reason WHY I’m watching. I think it will be hilarious! I haven’t watched in a few seasons, but it looks like a good casting this year!
Lincee, I can’t wait for this. Also, I second Colorado Cat’s question on recapping Gossip Girl and 90210. They both look very trashy and fabulous!

MAKSIM is all my sexy dreams rolled in one……

I agree – goodbye guys – it is gonna be a girl star/guy pro kinda season….