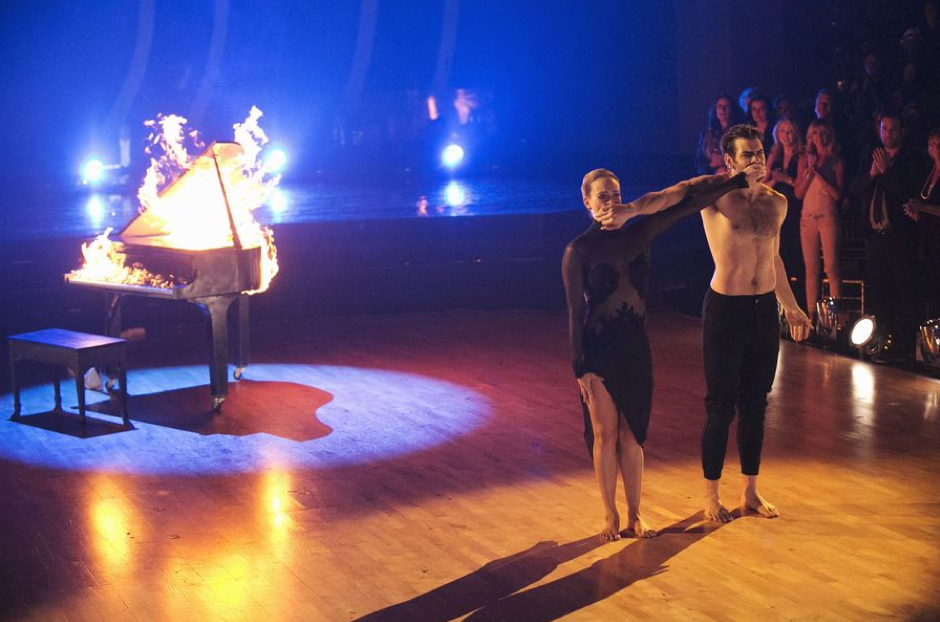 For the first time in Dancing with the Stars history, the remaining finalists of season 22 are only separated by three-percent. Tonight’s votes are crucial! Each finalist will perform two different routines — a redemption and a freestyle. And they have to do it fast, because The Bachelorette debuts in just under an hour. Let’s dance!

Ginger and Val
Redemption Dance: Contemporary
“Adventure of a Lifetime” by Coldplay
Ginger wants a redo of her sugary sweet contemporary from week 3. You remember the one about the love of her life that all the judges hated? Unfortunately, her back isn’t having it. Ginger’s entire torso section is tired of bending over and stretching and having babies. It’s boycotting. So Val choreographs a routine which incorporates set pieces of all their other dances. There’s a bench, a bunch of mirrors and the big Beauty and the Beast fountain adorned with JV dancers in billowy outfits. Val carried Ginger for most of the routine. It was evident that she was in pain. Len loved it. The other two thought Ginger was meh.
SCORE: 28

Peta and Nyle
Redemption Dance: Quickstep
“S.O.B.” by Nathaniel Rateliff & the Night Sweats
Remember when Nyle stuck his foot in his mouth the week he dressed up as Jim Carey from The Mask? He said his biggest competition was Val? Yeah. Peta wants to redo that entire week. She squishes in a lot more footwork for Nyle, slaps him in a cowboy outfit and makes him prance around to a song that shouts out “son of a b!tch” every five seconds. It lost a bit of its precision near the end and they dance in a corner for the majority of the routine for some reason, but the biggest distraction was the absence of my beloved Ramone. I don’t know where he ran off to, but I hope he’s back for part 2 of the finale!
SCORE: 27

Paige and Mark
Redemption Dance: Salsa
“Fireball” by Pitbull
Since Paige has pretty much slayed every routine she’s been given, Mark decides that redemption week is all about him. He wants to redo the salsa responsible for Paige and Alan falling in love in week 2. He enlists the help of a few JV dancers, along with Sasha and Sharna. Paige makes a quick costume change in the middle of the number and then kills it. She had a bit too much duck face, but I’ll forgive her because the entire dance was sharp, fast and on point. Crotchety Len tells her that there wasn’t enough hip action, but the others give her 10s.
SCORE: 29

Ginger and Val
Freestyle
“Orange Colored Sky” by Nat King Cole
Ginger channels her inner Ginger Rogers in an outfit that was incredibly unfortunate. I would have liked to see her in a feathery standard number dancing check-to-cheek with Val rather than  those ugly brown gaucho pants. I also didn’t care for the newspaper prop that remained in her hand the entire first half of the number. The tap dancing part in the gazebo was cute. I’ll give them that. The judges gave them a lot more!
SCORE: 30

Peta and Nyle
Freestyle
“The Sound of Silence” by Disturbed
I’ve been watching this show since its inception when the dude from 98 Degrees won with Cheryl Burke with a freestyle to “Save a Horse, Ride a Cowboy.” Never in these 22 seasons have I seen a professional call in another choreographer to create a routine. Is it fair? I don’t know. Were Peta and Nyle’s “growling” faces awkward? Absolutely. Did they perform the routine to the best of their ability? You bet. Was it necessary to ruin a perfectly good grand piano in the process by setting it on fire? Doubtful. Did this death metal version of a very popular Simon & Garfunkel song give me nightmares? Of course it did. But the final product was powerful, intense and interesting. Way to go random choreographer!
SCORE: 30

Mark and Paige
Freestyle
“Somewhere Over the Rainbow” by BC Jean (Mark’s fiance)
Mark was inspired by Paige’s video package from the week before. He wants her last dance to finish the story. She has overcome bullying and adversity and she will never be the same after her experience on Dancing with the Stars. It’s a pretty routine with soft lifts and angsty facial expressions. Paige’s toe point is divine. Her bloomers have lace around them too, which is a detail I feel is important to share. Everyone loved the routine and Mark cried like a baby.
SCORE: 30

Who do you think is going to win? Who will take home the mirrorball trophy? My vote is Paige!

Busy night and day for you! Great recap! Paige fan here…hope she wins!

Ramone was in a serious accident! Apparently Nyle almost forfeited because he was so upset but decided to dance in his honor! Poor Ramone! I don’t know how I missed that during the show but just read about it. I think the final three are all good. Ginger should not be there though, I think Wanya should be in her place. To me, Ginger is just not that interesting to watch or learn about. And, where is her baby? Paige is the best dancer. Nyle has the best story. It’s a tough call but I think Paige deserves the mirror ball.

Can’t wait for the Jojo recap!! Lots of fodder for sure 😉

Loved Peta and Nyle and their routine. The ugly brown gaucho pants? Totally agree. Why? Why, costume department???? Happy for the winners but I was rooting for Paige and Mark.

Thank you for calling out Ginger’s unfortunate gaucho pants – they were horrible. And I didn’t think their freestyle was particularly great or interesting. Compared to what Val came up with for Rumer, it was downright dull!! I missed having Wanye there, he should have been in the top 3 with Paige and Nyle. Either Paige or Nyle were deserving of the win IMO!

About the “random choreographers” – majority of the pros use outside choreographers but you just don’t hear about it. Mark used Alan Salazhar for his freestyle, Lindsay used him for a couple of her routines as well.