Okay readers. Let’s talk sexiest man alive. Everyone knows that I’m an expert on this subject. Let the record also show that I’m still waiting for my invitation from People Magazine to be a member of their selection committee. I did major in abology after all.

I’ve written about the sexiest man edition once or twice (read: four) before and have anticipated the annual reveal since its debut in 1985. Translation: I’m qualified.

Jimmy Kimmel is slated to reveal the new sexiest man on his show tonight. In the spirit of the “games,” I think we should predict who that person will be. To get you started, here is a list of the winners from the last decade:

Before I researched the list, my obvious guess would have been McConaughey. To say it’s been his year is an understatement. He won an Oscar and made a Lincoln commercial that went viral when other entities began making fun of it. He also has a movie out that needs promoting.

You may wonder if the powers that be at People would gift him with a second title so close to the first? How many years need to go by before a sexy man is deemed sexy again? To that, I give you George Clooney, Johnny Depp, Richard Gere and Brad Pitt. All have received the honor twice in less than 10 years. In Brad Pitt’s case, he won twice in five years. One would assume that McConaughey would definitely be on the list again.

Here’s another thought: In the last 28 years that this high honor has been bestowed, 26 of the recipients have been actors. That number is 29 if you count Adam Levine (last year’s honoree) as an actor. The only other recipient to not have a SAG card is John F. Kennedy, Jr. 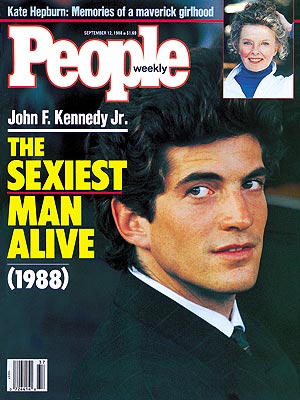 I totally get that.

Who do you think will land the coveted position of Sexiest Man Alive? Sound off in the comments section and let’s see if any of us get it right!

**There will be an actual post on my thoughts of the Sexiest Man Alive later this week.**

Here’s your Amen?
And I too majored in abology – dad was so proud!!

It will totally be Chris Pratt.

It SHOULD be Charlie Hunam!

Chris Pratt will probably get it but I’m pulling for Benedict Cumberbatch.

Thanks for that vintage cover. That was the first people magazine I ever bought. I was 16 and remember watching him speak at the Dnc and falling in love!! For this year, I agree with Robbie – Charlie Hunnam! 🙂

I thought McConaughey was a shoe-in, but he was just on the People cover. It will probably be Charlie Hunnam or Benedict Cumberbatch, but personally, I’d like to see one of the hotties from Hawaii 5-0 grace the Sexiest Man cover

Just because. My husband Pete gets my nomination. Oh, I may want new furniture, new dishwasher and new car but…

I am going with Jared Leto.

My vote for all time sexiest man alive is Ryan Reynolds. I mean just so cute!