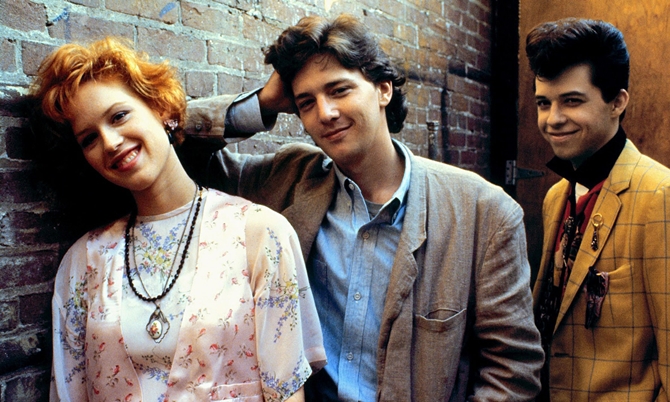 Lessons Learned from ‘Pretty in Pink’

Pretty in Pink is celebrating it’s 30th anniversary this month. Aside from feeling really, really old, I also felt really, really excited when my friend Stephanie suggested we go see the flick during a special anniversary showing at our local movie theater. Watching Ducky Dale on the big screen was everything I hoped it would be — and more.

The fashion was awesomely abysmal. The music was interestingly quirky. Molly Ringwald’s pout was on point and James Spader is one of my all-time favorite ‘80s villains next to Cobra Kai’s Johnny in his skeleton costume. Plus, we all know how I feel about John Hughes.

Pretty in Pink is one of the good ones. Here’s why:

Finally, when “Try a Little Tenderness” comes on, I think of this moment. Every time.

Great quotes! My favorite one that I still say is “I’m off like a dirty shirt!”

Oh my! I love this. These throwback movie posts make my heart beat a little faster! This is a good one. Love John Hughes.

Author
Lincee
Reply to  amy a

Thank you amy a. I love John Hughes too!

I know this is random, but how funny that I saw your post right after watching NCIS with my husband – he teased me for cracking up over watching Jon Cryer (guest staring as a doctor) say to another character (an ME nicknamed ‘Ducky’): “well, isn’t that Ducky, Ducky?” (Pause, chuckle) “I’ve always wanted to say that”. It was hilarious! Poor hubby didn’t get it!

I’m right there with you Jen!

Thank you! Ducky at 3 am! Over 60 and still loving Pretty in Pink. I want to be Iona for the younger gals in my life.

What a wonderful goal, Ann! Be Iona!

I thought the ending was so romantic in my teens, but now it just makes me mad! Blane always “believed in” Andie, but then still jilted her and went to the prom alone? And then she chases after him at the end?!! Ugh…

I know. According to the movie extras, she was supposed to end up with Ducky!

Gotta say, one of my favorites…and I got to meet Andrew McCarthy at his book signing 2 years ago. Man has aged WELL! He looks better now than he did then.