Putting her spirit sprinkles to good use 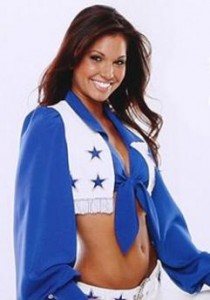 As many of you have told me today, People Magazine is confirming that our jilted Melissa is going to be taking the place of Nancy O’Dell (who suffered a knee injury late this week) on Dancing with the Stars.

My sister and I have been discussing the “breaking news” and wondered what constitutes being a “star” according to ABC.

One might guess that they are at the most…a D-list actor/actress.  Or that they had at least one hit on the radio between 1984 and 1998.  It never hurts to have been a stud athlete back in the day.  Pretty much anyone with a Screen Actor’s Guild card is certainly viable.

But we figured that poor Nancy was secretly Tonya Harding-ed by the ABC intern because Melissa was threatening to sue the network.  Or she’s going for the world record of most appearances on reality TV.

Regardless, tune in tomorrow night to see how the former Dallas Cowboys Cheerleader performs.

What do you guys think?  Will Bruno tell her that Jason is a FOOL for letting her go?  Will Carrie Ann give her a high score because she learned the dance in five seconds?  I’d give my sister’s first born to see Jason and Molly in the audience clapping and making out.  I’m just saying.

Maybe you could continue with the blog since DTWS will be Bachelor-related?

Are you kidding me?

This is becoming like a bad version of “Six Degrees of Kevin Bacon” with all these ABC Bachelor/Bachelorette rejects! WOW!! I wonder if proud mom and pop will be in the audience with her super close family?!

Who wouldn’t sign up for the bach and get your 15 minutes of fame one way or another? Lince, DWTS might be worth a blog!!

Wasn’t Trista on DWTS? So is it really that big of a stretch for Melissa to be on it?

what does this make…5 reality shows now for melissa? it’s just a slippery slope to “bret michael’s rock of love bus!”

then slipping down to Fayvah Flaves show….

I passed on buying People today because Jason and Molly were on the cover…now I will have to officially pass on watching DWTS…unless Lincee decides to blog about it since Lincee’s blog is the only reason I watch The Bachelor either.

Please, please, please, blog this for everyone! I’m watching DWTS just to see our Mel. Trista did it and no one lynched her. Let’s support our fav (other than Jillian, of course). Hope Jason and Mol crawl under the nearest rock.

So much for Mel’s “reality tv days being over”. I guess the “teacher thing” in Dallas can wait a bit. Jason isn’t the only one who can change his mind on dime (or half a million as the case may be)!!

For the record, DWTS will be Mel’s THIRD reality tv show after The Bachelor and Dallas Cowboy cheerleader reality show shown on CMT about trying out for the squad.

Please don’t judge me too harshly, but my sympathy for poor rejected Mel is quickly evaporating. I think she is where she wants to be and I expect we will be seeing more of dear Mel in the future.

it would be classic if jason and molly were in the audience and making out! Too bad amazing race is on another network, I think Jason and Molly should go on that to see if they are compatible! I wonder if jason would cry if he got lost!

Hi Lincee! Great post! I saw this about Melissa today too. It cracked me up! It’s like your world’s are colliding! LOL! 🙂

I bet DDYawna is sooo pissed about this, Mel has one upped her!

I have to agree with #10… It seems that she might be where she wants to be….

I’m not feeling quite as bad for her anymore either. Far be it from me to judge anyone’s motives (but, okay, I’ll go ahead and do it anyway!), but it just seems convenient for her to fall onto Dancing with the Stars. I guess she can’t find a teaching job in March 😉

And Jason and Molly still suck. I’ll be watching and rooting her on. Did Trista really go on DWTS?