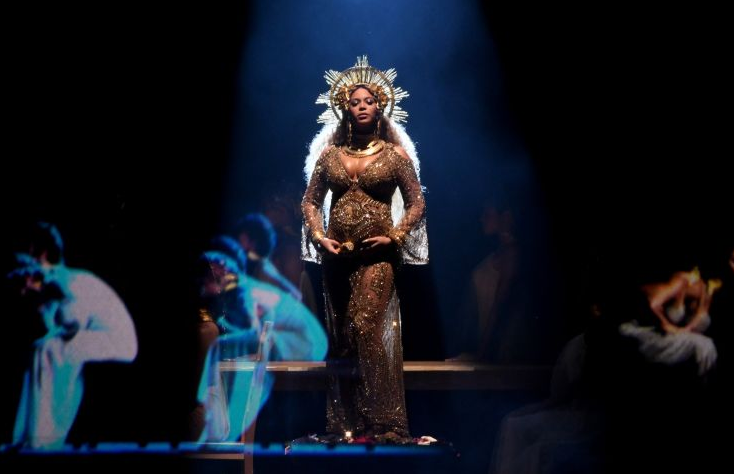 My Thoughts on the 2017 Grammy Awards

Music is a big part of my life. That’s why I watch the Grammy Awards every year. You can imagine the punch to my gut when I sit for four hours Goggling the names of most of the performers and nominees. I like to think of it as research, but most of the time I feel like I’m an old lady who is on the brink of listening to only NPR podcasts instead of the latest greatest musical stylings of award-winners like Chance the Rapper.

For those of you who feel like me, I complied a list of highlights and head scratchers from the 2017 Grammy Awards so you can participate in water cooler talk this morning. Enjoy.

Hello
The first thing you need to know is that Adele won most of the major awards last night, including Record and Album of the Year. She thanked Beyoncé for being her light, broke her own Grammy in half to share with Queen Bee, and asked if Beyoncé would be her mummy. If you listened through the cheering crowd, you could hear a collective “me too?” from the audience. 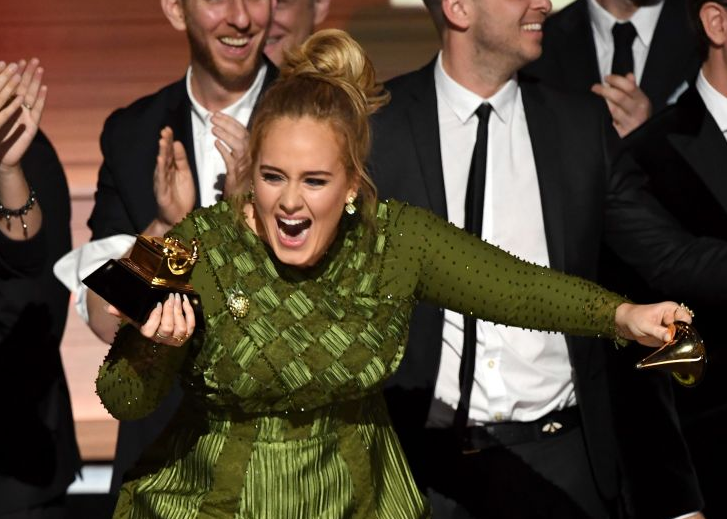 Twinning
Beyoncé performed a stunning number that lasted no less than ten minutes. I’m not completely sure what it was about. It was part video Beyoncé in a bikini, part live Beyoncé in a gold dress, and all goddess divine. There were chairs, lady dancers, rose petals galore, a long table, yards of gold lamé, and a very pregnant Beyoncé singing about womanhood/motherhood. This is why Adele and Company want Beyoncé to be their mummy. Bee later changed into a sparkly plunging red number, with a diamond necklace dripping down her shiny cleavage. She looked good.

Hello Again
Adele sang a tribute to George Michael and one minute in, she cursed into the microphone, turned to her 22-piece orchestra, apologized to the show runner, and asked the band to please start again. She apparently hit a wrong note or said a wrong verse and was MORTIFIED that she was besmirching Sir George’s memory. She began crying and the audience swelled in support for her to START OVER! After, when I was sure the camera would cut to commercial since this is a live show, the director panned over various faces who were standing and clapping for the British songbird. I may have teared up too.

Jenny From the Block
Jennifer Lopez does not age. And she can rock a slit in her skirt like nobody’s business.

Relationship Status
During The Weekend’s solo with Daft Punk, I found myself searching Google to see what Daft Punk looks like without their Star Wars helmets and if The Weekend was still dating Selena Gomez. I also wondered why The Weekend was singing in Superman’s ice fortress.

Adele Dazeem
John Travolta couldn’t read the teleprompter, which was unfortunate. Thank goodness he had the wherewithal to improvise an introduction for the next musical guest by working in Saturday Night Fever, Urban Cowboy, and Grease references. That’s talent.

She Bangs
While watching Keith Urban, I contemplated getting bangs again. I also decided I need an aggressive leg workout, thanks to Carrie Underwood’s stems.

Boxers or Briefs?
A group named Twenty One Pilots won for Best Pop Duo/Group Performance. They accepted their award in their underwear. I though it was a silly bit at first, but one part of the duo said that when they were nobodies watching the Grammys in their underwear several years ago, they agreed that if they ever won one, they would accept the award exactly like they were dressed back when they didn’t have anything. The audience LOVED it. So did I. Not enough to buy their record, but enough to file them away as adorable boys. 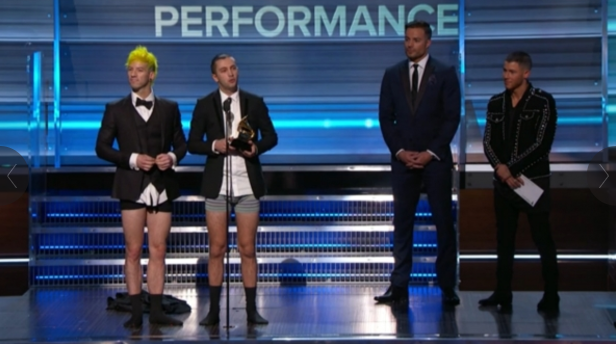 You get all sorts of information in this picture. There are Twenty One Pilots, pantsless. There’s Joe and his bedazzled jacket. And there’s a dude who brought out the Grammy award. This part is typically played by a tween-like girl. PS: I never saw this dude again during the night.

The Missing Weasley
Ed Sheeran played by himself on the Grammy stage with nothing but a guitar, keyboard, two microphones, and a machine called the Chewie II that allowed him to record himself playing all sorts of parts and then mixing it up to be a one-man show. It was really cool and I was irritated with the audience for NOT standing up and giving this guy the props he deserved.

Carpool Karaoke
James Corden did a decent job as host. I liked the carpool karaoke bit. Neil Diamond and J-Lo leading the audience singing “Sweet Caroline” with John Legend, Faith and Tim McGraw was a sight to behold. Little Blue Ivy wandering over to join the fun with her rhinestone kitty purse was the icing on the cake. This kid is musical royalty.

Cheeks I Want To Squeeze
Bruno Mars’. Especially when he pays tribute to Prince by dressing like him AND playing the guitar like him.

Things I Didn’t Expect To See
Guys in white leotards. Thanks to Katy Perry’s new song, I can scratch that off my bucket list.

Maren Morris
This is a country music name you should know. She won a Grammy and sang with Alicia Keys. Maren chose to wear a sparkly bodysuit with matching sheer robe in this epic moment. Bless her. I’m so glad she sounded good and sort of held her own against Alicia.

Taking Us To Church
Everything is better with a Gospel choir. Thanks for proving my point, Chance the Rapper.

Stayin’ Alive
Demi Lovato looked amazing on the red carpet and during her tribute to the BeeGees. Barry Gibb was having a ball in the audience. Demi out sang everyone else on the stage. I may have to start listening to her music…

People To Spotify
Chance the Rapper and Sturgill Simpson.

People Whose Hearts We Need To Bless from the 2017 Grammy Awards: Cee Lo Green 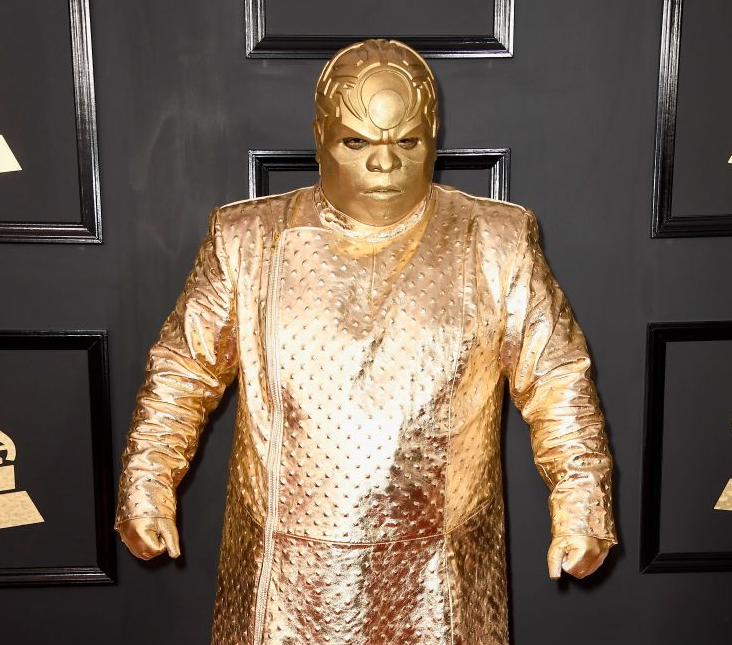 I was shocked by the number of cold sternum dresses on the red carpet. Perhaps this is a trend we will be seeing in the next season of The Bachelor!

If you are curious about what Beyoncé’s performance was all about… look up Oshun (pagan Goddess of beauty/ motherhood/fertility etc..) it’s weird. She’s all in with lliuminati with Jay-Z and all their references and symbols have significant calculated meaning… People are so mesmerized… some are worshipping her – not a coincidence. The perception is that she’s deep and all “artsy” but it’s just pagan rituals … I love me some Grammy’s…but last night, was just too over the top! PS: Anyone else think Maren Morris resembles JoJo Fletcher???

I turned it off shortly after Beyonce’s goddess performance. The look on her face for most of that performance weirded me out good. Interesting to read what you’re saying. She’s great if people have perspective about Who they’re really supposed to be worshiping. She’s not it.

Amen! Just google Oshun and Beyoncé… it’s not a secret… people are just to ignorant to what is really going on… so strange! I’ll stick to Jesus and God… and Adele won by a milestone! Just saying!

Yes! I think she and JoJo look a lot alike!

Yes! I was thinking the same thing re Jojo and Maren Morris!

I had not heard this. Thank you Erica.

At the risk of backlash I’ll say I don’t get the Beyonce love. She’s pretty with a nice voice but really not that different than dozens of other performers in my opinion. I will suggest adding Twenty One Pilots to your Spotify list – these guys are incredibly talented musicians and amazing live performers.

I agree with Ann all the way. I don’t get the Beyoncé love, my 14 year old daughter agreed so that makes me cool…right? I started listening to Twenty One Pilots and Panic at the Disco (up for rock album, but didn’t win) because I wanted to hear what my daughter was into. They are really good. And this is coming from a mom that basically listens to KLOVE. Actually taking her to her first concert, Panic! soon and I cannot wait.

Nikki – Panic! is also amazing live, you are going to have so much fun! I’ve seen them twice with my kids (12 & 15) and I think we’re going again next month.

I’m with ya- I don’t get Beyoncé either. Nice to know I’m not alone!!

Adele of course was incomparable and deserving! I felt so proud of her for completing her heart-wrenching tribute to my late idol, George Michael, and I got misty watching him on then big screen! His lips were moving in sync it seemed. Will have to re-watch my DVR of it. Bruno Mars, we are LUCKY to having. He was So Prince in every way. Queen Bee looked like a big real Queen Bee in that golden outfit (like a big fertile hive queen).Her voice talking and singing was so fine. All of the Grammy show was great but those were my most memorable.

I thought Bruno did an incredible job too.

Sturgill Simpson’s music is life changing. He the modern day Waylon Jennings. You won’t regret adding his music to your Spotify!!!

I love Beyoncé but I prefer the way Adele performs. She gets up there and sings her ass off. Beyoncé is just so extra.

Bruno Mars, Demi Lavato, Adele, and Sturgill were my faves of the night.

Yes! I’ve been listening to him and like him! He was on SNL and sang a very heavy metal sounding song, so I would have never put him in Waylon’s category. Thanks Alana!

Oh! And “The Missing Weasley” Ed Sheeran made me giggle. His performance was interesting to watch and really showed how talented he is.